Development of the Electrolung came about through a chance meeting of John Kanwisher and I aboard Ed Link’s diving research vessel Sea Diver in the Bahamas in early 1968. Ed was trying out his new diver lock-out submarine Deep Diver and had invited along several researchers with relevant interests. I was there to do some deep biological collecting and John was there to do heart rate/respiration measurements on divers using some new acoustical telemetry equipment he had developed.

Lock-out dives from Deep Diver were done using hose fed open circuit Kirby Morgan helmets. Gas for this purpose and to pressurize the lock-out chamber was supplied from a large high pressure sphere carried by the sub. The large amount of gas required for a single dive severely limited the number of dives which could be made and involved substantial cost and logistic considerations. The need for more efficient utilization of gas was clearly apparent.

It turned out that John and I had both been considering the feasibility of a mixed gas closed circuit rebreather using electronic sensors to control PPO2. We both knew in general terms what was needed but John wasn’t a diver or a machinist and I didn’t know that much about electronics. However, I had been diving for 15 years and had built a wide range of underwater equipment and John, in addition to being a physiologist, had invented the first polariographic oxygen sensor and held a dual appointment at Woods Hole Oceanographic Institute and Massachusetts Institute of Technology where he lectured on electronic instrument design.

When we returned to our homes John started putting together the sensors and control circuit and I started designing the hardware and finding or machining the components.  Six weeks later we both had our respective parts together. John sent me a bread board controller circuit and sensors.  I installed them and a few test dives showed that it indeed worked. The overall concept and design appeared good but there were of course, numerous details to clean up. The electronics for example were wire connected on a breadboard and the solenoid valve I had hand made using a solenoid scavenged from a battery operated cuckoo clock.

Although the prototype was put together quite quickly it was far from a "first thing which comes to mind" effort. Quite a few years experience and thought had led up to it, so when actual construction began, we both knew pretty clearly what was needed and how to do it.  Over the next few months we quickly followed with a cleaned up version using printed circuit boards, a proper miniature pneumatic control solenoid valve and sundry improvements to various details of the  mechanical design.

A couple of years later, after we had  sold the commercial rights to the Electrolung to Beckman Instruments, I had the opportunity of working with a team of high tech engineers on improving the same device. The outcome was some further tidying up of details but no fundamental changes. The biggest problem was to prevent the creation of problems which didn’t previously exist but could be introduced through changes made by specialists who were unaware of consequences outside of the narrow area of their expertise. The experience gave me a appreciation of both the strength and the limitations of specialist expertise as well as the importance of systems analysis in coordinating and integrating specialist input.

John Kanwisher was also on one of the advisory panels to NASA in connection with the Apollo program. Although he recommended using a mixed gas atmosphere in the Apollo capsule he was over-ridden by engineers who felt that monitoring the PPO2 was too difficult. John knew better as he had been doing it for several years in conjunction with his work on respiration but the engineers prevailed. The result was a fire which killed three astronauts after which they switched to a mixed gas atmosphere. 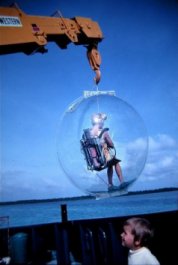 In late 1968 the first operational version of the Electrolung was ready to go and so was El Torito.  In November of that year I set out for Cozumel aboard El Torito with several new Electrolungs.  Over the next few weeks I conducted a series of dives culminating in a descent to 400 feet where I photographed and collected a new species of gorgonian. During the next two years I dived the Electrolung exploring the deep outer dropoffs of reefs from Cozumel to Belize and in various location in the Bahamas. This work involved the discovery of several  more new species of fishes and invertebrates.

A story  in the August 1970 issue of  Skin Diver Magazine told the story of the development of the Electrolung and the September issue followed with a story by Paul Tzimoulis on making a 300 ‘ Electrolung dive with us  on "The Wall" off Fresh Creek, Andros Island in the Bahamas. My story, "Probing the Deep Reef’s Hidden Realm", appeared in National Geographic Magazine in December 1972.

Although development of the Electrolung was exciting, in itself it was just an interesting incident in a bigger, more interesting and more significant picture. Like most historical events, I suppose, what was happening didn’t appear to the participants at the time so remarkable as it later does in the broader perspective of hindsight. The larger view what is taking place at any time tends to be somewhat obscured by the ordinary events of living. Except for rare instances whatever we are doing, however interesting and exciting it may be, tends to still feel like life, not like history in the making.

In retrospect however, I have come to realize that from the mid 1950s through the mid 70’s something remarkable was taking place in diving. During that period it grew from the obsession of a small group of generally impecunious young people mostly in FL, CA, France, and Italy to a global industry catering to relatively well-to-do hobbyists. Remote tropical islands all over the world began to sprout airports and dive operations and diving became strongly oriented to travel to exotic locations. Though all this was in itself remarkable something truly unique was at the heart of what was happening.

For the first time in history humans could freely enter, explore and personally experience the oldest, richest, most beautiful and exotic communities in nature, tropical coral reefs. Coral reefs are truly special places. Nowhere else can one experience such an abundance and diversity of life. Nowhere else is it so colorful, exotic and so easily experienced at close range. 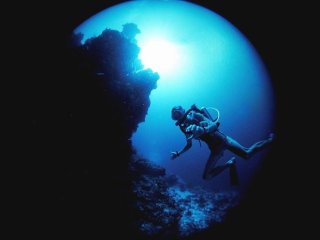 Over the past 25 or thirty years advances in diving technology have been almost entirely small and incremental. The only real exception I can think of is the development of dive computers. It appears we are up against the realities of human physiology. With every increase in depth and bottom time the cost, complexity, effort, and risk increases exponentially while the return of useful achievement remains more or less linearly related to bottom time.

The future would seem to lie in other directions, especially robotics.  Here advances have been impressive and future development promises to become even more so.
If as a diver you find this kind of scenario uncomfortable, don’t let it worry you. Long term prediction, no matter how well reasoned and seemingly inescapable, has a way of almost always being wrong. Fortunately, the real outcome is usually even more interesting than any of the predictions.