To give you an idea of where Alun George is with his freediving, here are some figures:

At Bangor University school of sports science recently he registered a vital capacity of 8.3 litres and then, on a second attempt, accidentally broke the machine.

His hematocrit level was 50.5%, above the average of about 44% and as high as cyclists doing the Tour de France. His haemoglobin levels were also extremely high at 170 grams per litre, the average being about 140.

All rather interesting for a slight man who does very little aerobic exercise. Oh, and a few years ago, he couldn’t even swim.

Many people come to freediving through a love of the ocean, spearfishing, scuba diving or swimming. I found it incredible that Alun, who can swim like a fish, only learnt in his mid twenties. His biggest problems then were learning how to breathe whilst swimming and overcoming a fear of sinking – how ironic. A lifeguard qualification followed, and soon he was swimming every day.

Around the beginning of 2000 he saw The Big Blue for the second time, and having been inspired by Andy Le Sauce, Umberto, Pipin, Fred Buyle, Trevor Hutton and others … contacted Ben Gowland and started to freedive. 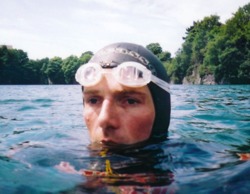 I first met Alun a couple of years ago in Manchester, where I was hassling him to learn. Often the best teachers are those who have struggled, and Alun’s journey and thirst for new knowledge has made him a mine of information and suggestions. He is forever patient and encouraging, and is constantly pushing the knowledge of techniques.

Soon he introduced me to the love of his life in North Wales. She is big, moody, murky, deep, and her name is Dorothea. Such is her lure that Alun visits her at least twice a week all year round.

A group has grown up around her now, and every weekend at least four divers come to dive in 4-degree (C) water, which is black at 40 metres. They’re a very close-knit group who trust and look out for each other. This makes for a very relaxed and supportive atmosphere."Low pressured", Alun calls it. Their philosophy is to progress slowly and build up plenty of experience and this is why they have such a safe track record and rarely overstep their limits. Big on experimenting with new techniques, they analyse themselves and their equipment closely and are always playing around with safety systems.

Alun has a very methodical and analytical approach to his diving and thinks really carefully about what he’s doing. He analyses his deep dives in detail and has a record of every one, even scoring them within an hour so he can remember exactly what happened.

The frequency of Alun’s diving has enabled him to notch up 50 dives over 50 metres in 2003. He is intensely private about his achievements and, unusually for someone of his standard, refuses to compete. When I asked him why he wouldn’t, he said he just didn’t see the need to do it. He wouldn’t get anymore out of freediving. For him, the best moment is doing a personal best amongst friends, and he rang me up recently to say how he had managed to film a friend reaching 50 metres for the first time and how much this meant to both of them.

But Dorothea isn’t always the most peaceful of places. Alun told me what happened when he was going for a PB last year:

"It was when I was going for a PB during the summer. On that day about 50+ ‘hippies’ had invaded the car park at Dorothea and were having a ‘rave’, which was still going on by lunchtime on Sunday. The place was littered with rubbish and ravers who were off their heads on booze and drugs. All this time I was trying to get my head together for my goal dive of the year… I was having to listen to deafening techno music (proper concert loudness- good music though) as I breathed in the water. It all seemed quite bizarre really! All fell silent as I went under and then I heard it again as I surfaced". God knows what they made of Alun! Alun is one of the quietest, shyest people I know and although he refuses to compete, he is open to the possibility of setting National records. When I asked him why he said that he would want to give British Freediving a boost. "At the moment Canada is streets ahead of us but have very similar diving conditions". He sees the most important thing being that it is done in British waters, "…you don’t have to jet off abroad to dive to a high standard."

So will the quiet man of British freediving finally put himself on the map? We wait with bated breath!