The Wrap Up: Infinity Depth Games 4

On the final day of competition at the fourth annual Infinity Depth Games Pavlos Kourtellas raised the bar and lowered the plate, this time for himself. Throwing his metaphorical hat in the ring, Kourtellas announced a National Record attempt in the discipline of Constant Weight (CWT). Safeties and other athletes alike were of course rooting for the industrious Cypriot, but some voiced concerned at such a formidable feat: to have the focus and strength to execute a big competition dive after taking on all the pressures & stresses of running the event and organizing the well-being of over 2 dozen international guests seemed implausible if not extraordinary. But the hard-working Pavlos did as he always does and completed the task, handily and with grace. In a dive time of two minutes and :30 seconds Kourtellas pushed his own National Record ever deeper to 73m and came up clean to receive a well-earned white card. (In full disclosure, I was one of the judges who displayed a white card for Kourtellas and I could not have been happier to do so!) Watch Pavlos’ record-setting dive here below.

“Since organizing our first depth competition in 2014, I believe that this year’s competition was the ultimate success. I feel so lucky to be part of a strong team whose collective sacrifices and determination has finally paid off and I feel great joy and motivation towards our future endeavors & events to come,” beamed underwater photographer & co-organizer Costas Costantinou. “What initially started as a timid idea has flourished over the last four years to get us noticed by the International freediving community which we are deeply grateful for and we intend to advance our progress even further with many more competitions. Something that also made the last 2 weeks very special was Sayuri’s and Hanako’s decision to come to Cyprus to train with Infinity Freediving – it is such an honor to get to watch them dive.”

“As for my partner Pavlos achieving a New National record during the last day of the competition,” shared an excited Costantinou, “I was particularly pleased with the fact that even as tired as he undoubtedly was from the intensity of running our largest-ever-event-to-date he managed to make an excellent dive. We have formed an exceptional team with Pavlos Kourtellas and Nicole Karsera and we will continue to strive for even more success all together into the future.”

Pavlos’ white card performance was one of five new national records set at the burgeoning event. Kristine Zipfel of Norway also had a white card day with her free immersion dive to 60 meters on the last day, followed by Roni Gohar of Israel with a 50m performance in the same discipline. (On the first two days of the IDG4 Maria Sitti of Cyprus set two records for Cyprus as well in constant weight and free immersion, but decided to take a rest on the final day.)

In addition to the more seasoned freedivers the event saw a handful of first time competitors who are now hooked on the sport thanks to the kindness and inclusive nature of Infinity Freediving Cyprus and the support they received from their instructors including the well regarded Georgina Miller of Aquacity Freediving out of Great Britain (who also garnered only white cards in each of her own performances.)

See the complete roster of overall results here below (click to enlarge) and congratulations to all of the athletes and crew for creating a safe, fun and eye-opening experience for all. 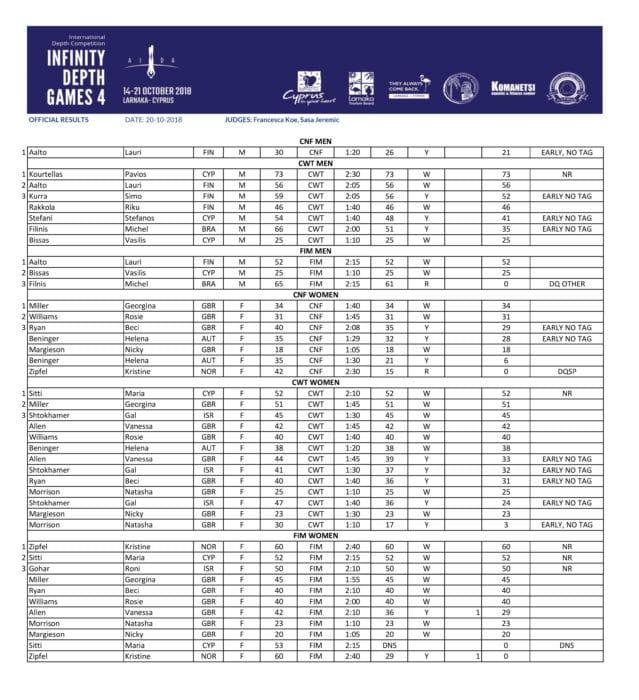 The US government has denied a petition brought by an environmental group to list the Giant Devil Ray as an endangered or threatened species.
Read more

With the holiday season approaching fast, DeeperBlue has some suggestions for the conservation-concerned diver on your gift list.
Read more