After yesterdays uneasy developments everyone here was holding their breath this morning on the final apnea walk down to the dock. No one wanted to jinx the day by calling attention to the almost surreal conditions that manifested overnight.

Kirk had asked that we all be ready to board our assigned boats by 7 am. The request was eagerly granted. We boarded the boats to the sounds of water gently lapping the hulls. Today’s atmosphere was in stark contrast to the day before. 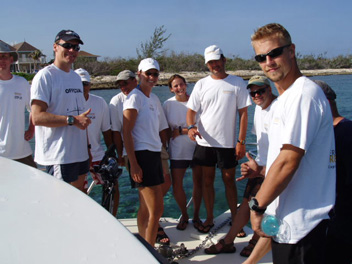 Tenata motored lazily around the athletes boat until they were ready to enter the water. There were no fins left back on shore today. I sat atop the boats cockpit shooting stills of our boats. It was incredible to see how close we were to shore. The lack of wind allowed us to dive directly off of our hotel. It was an ideal situation in ideal conditions. 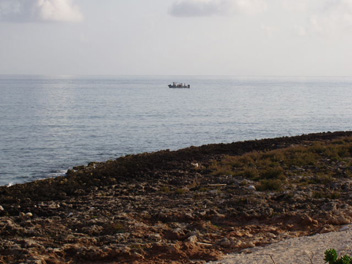 When I lowered my head into the water Martin and Doc were on the warm up line. I have watched Martin dive since the beginning of his career and I can usually recognize when he is going to have a good day. Today was a good day. Not one of those ”I’ll be able to push through it days “ but, a truly good day. Relaxed like seaweed in the water.

When Martin finally pulled his own snap shackle his chin was tucked to his chest as if he was sleeping. The sled, and Martin, slipped quietly underwater. There was no current today so the beast moved faster than usual. We all waited through the countdown that signals Kirk’s time to make his dive. The sound of packing was the last thing I heard from Kirk just before he mono finned his way to thirty meters.

I waited for Martin to appear from below before I made my dive to catch them on camera. Its sounds funny but, I couldn’t tell from a far which one was the athlete and which one was the safety diver. Kirk is usually cheering or steering Martin or Mandy to the surface. Today it looked like they were returning from a dive on the reef. When they surfaced Martin took only a couple of quick breaths and gave an ok to the judges. His total dive time was 2:27 for a World Record Variable Ballast round trip to 136 meters. Only after he was cleared by Bill and Nicholas did the crowed finally find the courage to break the silence and cheer for Martin. I shook his hand as he swam back to the boat. Kirk then reminded them that there was one more athlete left.

In keeping with the feeling that we better not push our luck we quickly refocused ourselves for Doc. This time we were ready for the sled when it hit the surface. They used smaller lift bags but stacked them so their combined lifting power raised the sled at a more gradual pace. It also gave us time to manually vent some of the rapidly expanding air on the way up. The crew spent a few moments resetting the depth and in less than 5 minutes Doc was straddling the beast for its final ride to the abyss.

The look on Docs face can only be described as relaxed determination as he slipped out of sight. I returned to the surface to await his ascent hoping it wouldn’t end like yesterdays packing miscalculation. In the mean time I floated a few feet from the line.

Like three small fish darting back from the Cayman wall Doc, Kirk and Tom Lightfoot swam up the line growing larger with each kick cycle. I schooled up with them at 20 meters and we swam in unison to fresh air. Doc’s recovery was as clean as Martins.We all awaited the final ok from the judges that would signal, not only the end of the dive but, the end of the event. After the prerequisite twenty seconds the judges did just that.

We spent the next hour or so diving down to the edge of the wall, chasing forty pound grouper and entertaining the safety divers in deco. When it was time to pull up the last line it was also time to drop the final curtain on the Cayman 2005 Diver Down event.

There were many dedicated and hard working people that made this event possible. From the largest sponsor to the smallest gesture it was an impressive undertaking by professionals in many different fields. I would like to think I did my part as well by dropping that weight in the ocean. 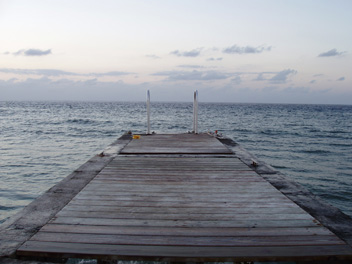