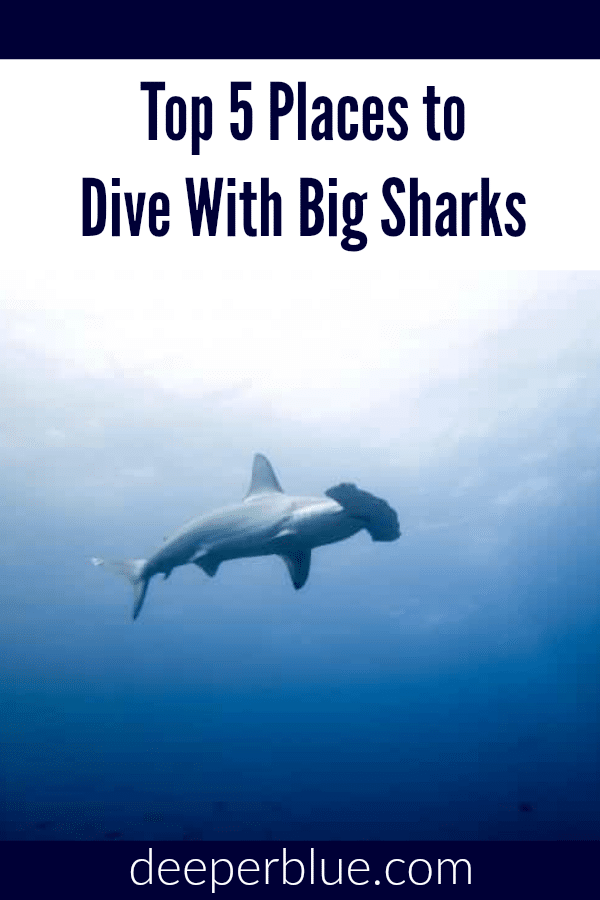 For many divers, getting up-close and personal with some of the ocean’s largest predators offers an experience of a lifetime. We take a look at the 5 best places in the world to go face to face with ‘big’ sharks.

Australia is known for its Great Barrier Reef. Stretching over 2300km (1400 miles) along the Queensland coast, it’s one of the world’s premier diving destinations. However, the land Down Under also offers a different diving experience, not least in the temperate waters of the south. Four hours from Port Lincoln, the country’s tuna capital, lie the Neptune Islands – home to a migratory population of both bronze whaler and great white sharks.

Conditions can be tricky, with large swells and chilly waters that can drop to as low as 12°C (54°F) but brave the cold and the rewards are huge; this is one of the only places in the world where divers can be lowered to the sandy ocean floor in a shark cage.

Visibility ranges between 5-20meters (16-65ft), depending on the season, but that first glimpse of the ocean’s apex predator coming through the blue is unforgettable. Anywhere between one and eight sharks are usually observed on dives, with huge 5 meters (16ft) female great whites seen more reliably from May through July. The most sightings are recorded from July to October when New Zealand fur seal and Australian sea lion pups start to venture into the ocean.

The Galapagos archipelago, almost 1000km (c.620 miles) off Ecuador’s coast, is arguably home to some the best dive sites anywhere on earth. Around 30 sites are commonly visited by divers and almost all offer the opportunity to see Galapagos sharks and scalloped hammerheads.

The latter, which can grow up to 4.3m (14ft) in length and typically weigh between 80-100kg (175-220lbs), are said to congregate in their thousands at certain times of the year, especially at sites including Darwin and Wolf which are only accessible by liveaboard.

Considered by many as the world’s best shark dive, Beqa Lagoon – just off Viti Levu – offers divers the chance to freely observe up to eight species of shark without the requirement for a cage.

Nurse sharks, white tips, gray reefs and leopard sharks are almost always guaranteed to make an appearance. And whilst there’s also a chance to see tigers, for most, the undoubted stars are the adult bull sharks that can reach lengths in excess of 3 meters (10ft). Reports of up to 70 fully grown bull sharks being observed during any one dive put Beqa Lagoon firmly near the top of the shark dive bucket list.

The clue is in the name when it comes to Tiger Beach. One of the ultimate dive sites for the ultimate in shark encounters, Tiger Beach – off Grand Bahama Island – wows divers with scores of tiger sharks and great hammerheads reaching up to 6m (20ft) in length.

Caribbean reef sharks, bulls, lemons and nurse sharks also make frequent appearances and given the Bahamas’ location, just 90km (56 miles) off Florida, this is one of the most easily accessible ‘big shark’ experiences for US divers.

Even though Tiger Beach is some 30km (20 miles) off the coast, several sand bars create shallow max-depths so bottom time is lengthy. And with visibility often over 30m (100ft) and warm water (up to 29°C/ 85°F), you’ll be begging for your next dive long before the previous one is even over. The season runs from September – March.

The world’s largest fish, the whale shark, dwarfs almost everything else in the ocean. Typically growing up to 12meters (40ft) in length (though there are claims of individuals over 14meters/45ft long) and weighing some 30 tons, the chance to dive with whale sharks appeals for many obvious reasons.

Whale sharks have distributed the world over – from Africa’s east coast to Pacific Mexico – but the Philippines offers some of the best chances to see them in all their majestic glory. Most tourists flock to the warm waters off Donsol, in the archipelago’s northeast, in order to snorkel with these giants but for divers Honda Bay in Puerto Princesa, Palawan offers the most authentic experience.

The best time of year to go is April – November when sea conditions are at their calmest and the warm currents make for a better chance of these behemoths congregating in large numbers. Visibility can reach 30m (100ft).