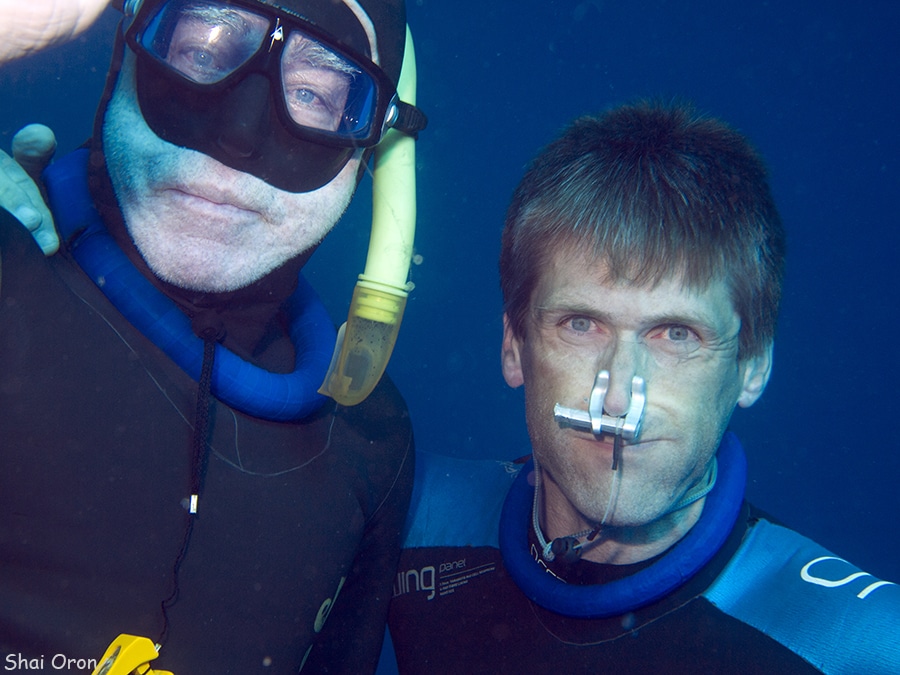 Editor Note: On Saturday 27th July, in Dahab, Egypt –  British Freediver Dave Kent broke his own Constant Weight No Fins National Record to an amazing depth of 70 meters.  His trainer, Aharon Solomons, gives a unique insight into the training regime that led to his record breaking dive.

David Kent first contacted me in summer 2012, we had been introduced by a mutual friend and had corresponded by email. David had elected to join my Remote coaching program. The emphasis after talking it over was on breath hold, both static and breathwalk, hill repeats for building lactic tolerance and flexibility and strength exercises.

In static we do an equal number of sessions on full and empty lungs.

David was already familiar with hill repeats, which are a killer and take no prisoners, it was straight away apparent that David was a “Head Banger” and needed no one running behind him with a stick or shouting at him from the side lines, he was used to pushing himself to the limit and beyond.

We put a big emphasis in the stretching exercises on the neck, to help ward off trachea squeeze, and the thoracic cage + diaphragm to avoid lung squeeze and to facilitate equalization at extreme depth and to help with adaptation to pressure. The exercises included Uddiyana and our own ball exercises (courtesy of Peter Walsh). The uddiyana exercises can be seen on YouTube – Exercise for diaphramic flexibility,and for the very advanced Uddiyana by Wayne Krassner. We do not recommend stretching on a packed lung.  The strength exercises were all body weight exercises.

On first acquaintance I liked David immediately he talked very much to the point, without any affectations or attempts to avoid or disguise issues he had been wrestling with. David had done first a UK record in CNF 62m, and had later improved it to 66m.

His manner was clear and concise without embellishments, I suspected a military past, which later proved to be the case, and one look at the man and it was not difficult to guess the unit. David keeps himself fit, almost obsessively.

We managed to isolate the main issue, equalisation. David had managed a 68mt CNF dive in training and felt at the limit of his equalisation capabilities. The first step was to understand what was happening. He was losing the air in his mouth and struggling very hard to recover it at depth. This was potentially dangerous and could lead to lung squeezes.

Here there were two possibilities, improve what there was, or work on a technique that I had developed for myself. The problem with the Frenzel + mouthfill is that unless your uncoupling of the epiglottis and soft palate are perfect, there is a leak of air past the epiglottis back to the lungs every time you move your tongue to equalize. In my system you do not move the tongue at all.

The best way to learn equalisation at depth is diving on completely empty lungs, and I mean completely empty, and filling the cheeks with the last of the air your are exhaling. This has to be approached very gradually, descending and ascending using only the hands. A nose clip is used and no goggles and as a safety precaution – no weights! At first the depth may be limited to only 4m or 5m  and is gradually and systematically increased.

We have a table of exercises for empty lung exercises. The challenge is to get to 20m totally empty using only the cheekfill you took at the surface and still have some air at 20m.

During David’s first visit he achieved 16m, an excellent achievement. My general impression was here was a potential Champion, he had it all, the character the will and unbending intent.

David returned to the UK at the end of October and continued with his remote coaching. David returned to Eilat in April this year. The mission was to complete what we had started in October 2012.

David in the interim had increased his static to 7+ mins, he also had an excellent breath walk, and empty lung static.

We began where we had left off in empty lungs and it was interspersed with full lung free immersion hangs at 50+m. The Hangs were long and were intended to build up  to depth. Progressing like a machine David got to 20m totally empty and still had air in his cheeks. It was going too well but we I noticed it was too slow. So we went to full lung (not packed ) variable weight drops. This was a challenge, at first depths that had been easy on FIM could not be reached, speed was the problem. I noticed that he lost his air during the duck dive and refilled immediately, but swallowed. When this was corrected David progressed rapidly to being able to take a mouthfill on the surface and drop through 60m and still have air left.

We met again 2 weeks later in Dahab to dive the Blue Hole. This was exclusively Constant Weight No Fins diving. We decided to begin at 50m and take it from there, experimenting on the way where to fill the cheeks. We were training 1 day on one day off. With increases of maximum 2m per session it went on rails to 68m. We were sometimes challenged by the weather and at least once by tech divers idiotically hanging on our line. David’s head missing one divers tank by centimeters at 55m during the descent. I was usually meeting David between 30-37m sometimes with considerable hangs, but the visibility was great and I could get a good impression of the dive.

One day David saw the incredible Arch during his ascent and was thrilled by it.

We had some days at between 60-68m experimenting with different suit and weight combinations . Then David did 70m and later 74m. In a one day competition after I left Dahab he did the New UK record at 70m.

It was a great ride with David with a lot of laughs on the way, I believe he has everything to be a great champion and is the most exciting prospect to come out of the UK in years.  I wish him great success and I know what he has sacrificed and how hard he has worked.

Aharon Solomonshttp://www.freedivers.net
Aharon is an AIDA Instructor Trainer, he originally learned freediving with Pipin Ferreras and Umberto Pelizzari 20 years ago ,he was qualified as an Apnea Academy Instructor in 1998 and an IAFD Master Instructor Trainer in 1997. He currently trains elite freedivers for records, and does all levels of AIDA courses. He runs a very successful remote coaching program for all levels. He is currently based in Eilat but travels through out the world.