As we reported yesterday, Yas was going for 46m which would re-set the World Record in the Unassisted Constant Weight discipline. This was going to be a stretch for Yas but hopefully the months of training would pay off.

Unassisted Constant Weight is a very tough discipline. It may not have the deep depths of No-Limits or Variable (the two sled based disciplines) but this is understandable as the diver has to progress from the surface, to depth and then back to the surface with nothing more than a wet-suit, a small weightbelt and a mask or goggles. To add to the dificulty the diver cannot even pull on the line!

In addition to doing this tough discipline, both Yas and David know that any depth achieved here during these "training" days must be repeatable in-front of the press on the actual record day on Friday 11th June.

Anyway, back to the day. After setting out from harbour the team had to frantically move kit and personel around the boat to stop it from sinking (not a great start to the day). However we finally made it to the dive site and the team set about preparing the dive platform and kitting up getting ready to support Yas in her attempt.

Once all preparations had been completed Yasemin made her way out to the platform and started her warm up dives. She looked strong and concentrating hard on the task ahead. Unlike David, Yasemin is much more used to depth after completing her Variable Weight sled dives earlier in her career.

Finally the signal is received from the team that everyone is in place and Yas is ready to go. She slips under the water effortlessly and all goes quiet for a few moments. Rudi and the surface judge are watching, waiting for Yasemin to re-appear. I see Rudi breathe up and disappear down to meet Yasemin around 15m. Yasemin surfaces as completes a couple of recovery breathes but then seems to arch backwards in the water. Watching her closely it seems she is still in control and breathing, after 2 seconds she regains her composure and faces Rudi before handing her tag to the surface judge.

After returning to the boat I speak with Yasemin, Rudi and Luca (the surface judge). It seems that Yasemin suffered a back spasm and the surface judge confirms that Yasemin was still in control. I check with Rudi and he confirms that the F.R.E.E. record was completed with satisfaction – "It was a marginal dive but still good. I would have prefered for Yasemin to have a completely clean dive but she did good".

Yasemin is going to take a couple of days to rest before attempting something around 47m or 48m.

Tomorrow is a rest day for both Yasemin and David so we will be publishing the first of several interviews with the team. 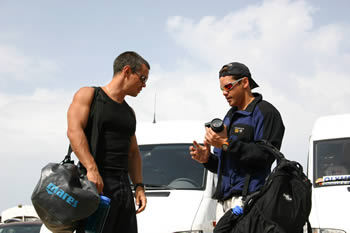 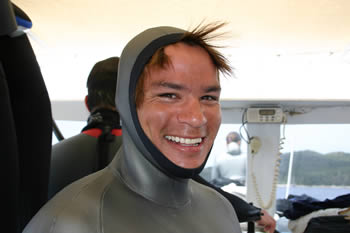 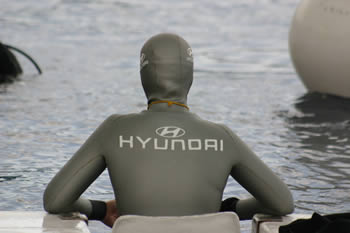 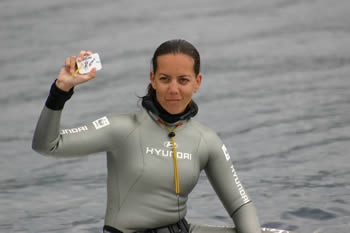