Media and sponsors are starting to arrive and the dive boat that felt spacious once now is beginning to feel busy again. Today was Yas’s last attempt at setting a World Record in relaxed surroundings compared with the stress and pressure of "Record Day". She was aiming for 47m but as Rudi explained during the briefing – "If she feels tired or runs into any trouble she will abort the dive" – this was so as not to put too much pressure on herself before the big day on Friday.

Yas seems to still be complaining of a lack of strength in her back and that her muscles are still cramping on occasion, this being compounded by her back spasm on Sunday.

Once we arrived at the dive site, a flurry of activity happened as Hyundai (Yas’s new major sponsor) had sent through the banners and stickers for the boat and dive platform. The team spent several hours the evening before putting the majority of the stickers on the platform but banners still needed to be hung on and under the boat. In reality a lot of today’s work was to setup ready for friday.

The preparations were completed and Yas was given the signal that she could proceed to start her warm up dives. Looking confident she swam out to the platform as start her normal 2 negative pressure dives to help prepare her for the actual record dive.

As expected she completed those and Rudi called out the 8 minute countdown mark. The dive team readied themselves and at 5 minutes everyone disappeared under the surface to take up positions along the line. Rudi and Luca (the regular surface judge) were left in the water as Yasemin finished her last few breathing cycles.

Yas faltered at the last breathing cycle and had to complete it again, slowing her start time to just before 2 minutes after zero was called on the countdown. She slipped under the water and everyone on the boat seemd to collectively hold their breath at the same time!

David was standing next to me and whispered to me at just over one minute that "she must be at the bottom by now". After another 10 seconds or saw we saw Rudi waving his arms calling an aborted dive. This is the moment where everyone starts to wonder what has happened and brings to light one of the big failings of Constant Weight dives, that being that there is no way of being able to see what is going on from the boat.

Yas surfaces within 20 seconds and looks reasonably relaxed. Rudi calls out to let us know that she was feeling tired on the way up and didn’t want to push the dive so gave her weight belt to a safety diver and pulled herself up the line. This is Obviously a disappointment for the team, however they are relieved that Yas is safe and that she will be attempting to match her 46m dive on Friday.

The next hour is used in setup shots for the video documentary and the Media/Film Team are in the water getting Yas to go up and down the line (albeit to a shallower depth) and by the time everyone is back on the boat there are definately a few rumbling stomachs as people start feeling the need for a spot of lunch.

Tomorrow is a rest day for Yas but David is going for 65m as that will be his last day of diving. Join us tomorrow as we bring you the news from the day. 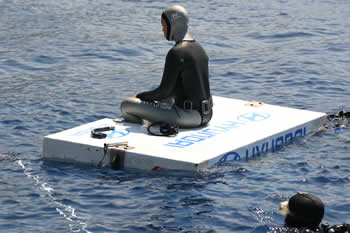 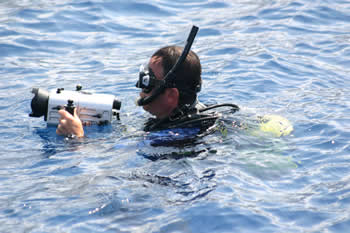 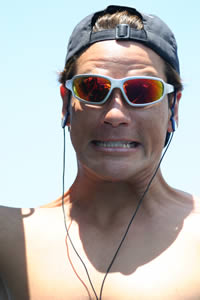 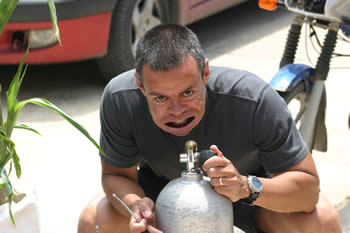