Today is the last day of diving for David. Having already set a new Unassisted Constant Weight World Record of 63m on Saturday 5th June, he was going to try to exceed it by another 2m. It sounds like only a small increase in depth but considering that this discipline calls for no propulsion equipment at all, it is truly a remarkable depth!

The dock was busy again today as the boat prepared to leave. More sponsors and media were in attendance, although they are primarily there to see Yasemin’s dive tomorrow. We set out around 10am into perfect conditions, there was no wind, no current and the sea was as flat as a pond.

As per usual the team were efficient in setting up the dive platform ready for David’s dive. David himself was calm, although he seemed to be spending a lot of time on checking his ears. He didn’t complain of any problems but any ear problems would manifest themselves quickly with the head-down equalisation of Freediving.

After being given the go-ahead by the safety team, David headed out to the platform by himself (Rudi was still preparing to enter the water). As we stood on the back of the dive boat, Rudi remarked that he had concern on how long it was taking David to enter the water to start his first training negative pressure dive.

By the time David returns to the surface Rudi is there waiting for him. When Rudi asks how the dive is David complains for equalisation problems in one ear. A decongestant (Afrin – Ephedra free version) is called for and delivered to David on the platform.

David gives it a couple of minutes before starting his second negative pressure dive. When he returns to the surface this time he seems more comfortable but stills seems to be suffering slightly.

After another few minutes rest Rudi calls the 8 minute mark on the countdown and the safety and media/film teams prepare themselves for what could be another record dive.

At 5 minutes the divers disappear under the waves and only a small number of us are left with David.

At the zero mark David slips under the water and we all start waiting. After a minute we get the signal from Rudi that David had reached the bottom and was on his way back up! Obviously only half the dive had been completed but relief was felt all round as David’s equalisation problems seems to have not caused him to turn back early.

David breaks the surface and begins his recovery breathes…we wait for those precious few seconds before being giving the surface judge the tag and the celebrations begin! David had completed an awesome feat – 65m down and up under his own power with no fins and no pulling on the line allowed! All this completed in 2 minutes 14 seconds.

Tomorrow is the last day of diving and Yas is going for 46m again in front of the assembled press. Join us tomorrow for our last daily report from on location. 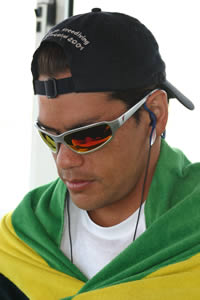 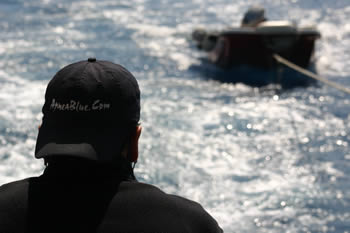 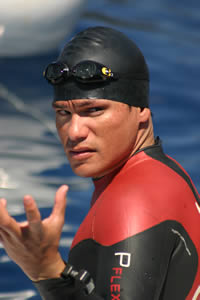 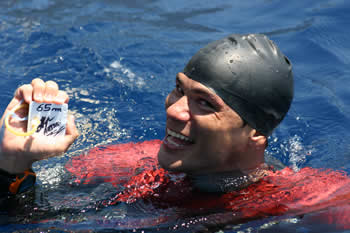