Sometimes in life you have to ‘see it’ to ‘believe it’; Vertical Blue 2021 was indeed one of those magical occasions, but even having witnessed it all many of us still can’t believe the sheer volume of incredible things that happened. For starters there were more world records (WRs) realized in one event than ever before — an astounding 12 world records and what’s even more impressive is that three people had the fortitude and the skill to individually set three WRs each themselves.

The aforementioned champions included Alenka Artnik, Alexey Molchanov and Alessia Zecchini who collectively dominated the competition and illustrated what sheer strength, power and determination look like. (By day 3 of the competition it was also evident that Zecchini & Molchanov would win the event handily, as they did.)

Alenka had a plan and she executed it perfectly — electing to take only three dives out of the available six the Slovenian athlete focused on a single discipline: constant weight with a mono-fin where she claimed three new WRs at 118m, 120m and an amazing 122m. Diving below 120 meters, an unprecedented achievement by a woman, Alenka inspired fellow competitor and world-record holder himself Alexey Molchanov to immediately contact the likes of Guillaume Nery and David Mullins to warn them that Artnik was not only metaphorically nipping at their heels but likely to surpass them.

Alexey Molchanov also had his own plans in mind coming into the competition. Flexing his ability, Alexey too set three world records but the canvas for the Russian included a free immersion dive to 126m, a constant weight dive to 131m and a bi-fins dive to 118m.

However the ultimate flex came from the mischievous (albeit brilliant) Molchanov when on the final day of the comp he announced another WR attempt in bi-fins knowing full well he was going to showcase his newest product for sale: some short, white training fins that he muscled down to 102m and back with the flash of his smile and a knowing gleam in his eye, the Russian didn’t mind a yellow card for his genius marketing ploy.

When I spoke to Alexey at the awards ceremony he gleefully revealed that his strategy going into the last day covered him if Arnaud Jerald of France announced an attempt at 119m – Molchanov would simply do the 120m. However, Alexey’s genius contingency plan allowed him to have a bit of fun (since in-fact Jerald did not announce another WR attempt) and to lightheartedly still manage an astounding dive and create a moment as the kids say.

The third player in the world record hat-trick was the woman who took home the overall gold for #VB2021, Alessia Zecchini of Italy. Like Molchanov, Alessia spread her stellar WR performances across three disciplines.

On the first day of the comp Alessia set her first WR of the international event in the discipline of constant weight with a clean dive to 115m, (which was then eclipsed by the next attempt produced by Artnik on the very same day). On day three of #VB2021 Zecchini’s announcement of a WR attempt to 74m in constant no-fins (CNF) took many spectators by surprise — why would Alessia push in the hardest discipline, as her second performance and only one day after a huge dive to 115m CWT? And another WR to boot?

The reason was simple, Alessia’s motivation was based on her desire to provide a heartfelt tribute for Sayuri Kinoshita. Alessia’s dive was both inspired & touching, given that she made it on the very day the freediving community sadly lost it’s favorite cheerleader back in 2019 (in an unfortunate, non-diving related accident). Alessia’s sincere gesture resonated around the world and manifested the friendship & respect she held for Sayuri.

“I really don’t understand why Sayuri liked this discipline so much, because it’s so hard! But really she helped me so much today, on the ascent and this record is for her,” shared an emotional Zecchini.

The lithe frame of the Italian sensation belies her super-human strength, and the kisses she blew to photographer Daan Verhoeven on her way up showcased her big heart and spirit — a playful spirit that Sayuri would have loved.

After setting two world records in a row, you might expect an athlete to take it easy but not the intrepid Zecchini. On day four of the competition Alessia was right back in the arena completing a free immersion dive to 101m — which she commented felt super nice and yes, easy.
It’s hard to fathom that in years past you might have one or maybe two world records set at a time, but to experience world performance after world record performance in mere minutes, and to have had a total of 14 WR attempts announced is just staggering.

What’s also very alluring & alliterative about all of these world records is that everyone who set a new World Record, (and in most cases a personal best as well,) at #VB2021 had a name that started with the letter “A”! So in addition to Alenka, Alexey and Alessia we witnessed two divers from France achieve WRs in the discipline of bi-fins, aptly named with ‘As’, Arnaud Jerald and Alice Modolo.

Coming into Vertical Blue 2021 people expected the 25 year-old Arnaud to compete at the highest level, and to try his hand at furthering the bi-fins world record set by another Frenchman, Abdelatif Alouach, who only just set his record in June at the French nationals in Villefranche-Sur-Mer (pssst did you notice that Abdel’s name also starts with A?!)

On day one Arnaud realized his goal. The real sleeper in this A-list of athletes turned out to be Alice Modolo. Modolo, a former dentist, was making her second appearance at Deans Blue Hole and Vertical Blue. The experienced freediver was not intending on breaking any world records, but as fate would have it not only was Alice doing very well in the bi-fins category, her technique was flawless. With exquisite poise and grace Alice propelled herself to the very first world record for a French woman with a CWTBF dive to 95m.

You might think that nothing would top a world record, right? Well at Vertical Blue 2021 you could be wrong. Once the elated Modolo achieved her world record in bi-fins, she then realized just how close she actually was to the highly-sought-after 100m mark. Riding an enormous wave of confidence & momentum, on the final day of the event, Alice would seek to become one of only about a dozen women in the world who have ever dove to 100m in a competition. And succeed she did.

The exclusive & elusive club of humans who have achieved 100m also now includes Misuzu Okamoto of Japan, who kicked off the last day of #VB2021 with a spectacular white card dive. The dizzying depth achievement is a testament to Misuzu’s training, positive outlook, and mental focus.

Mimi’s magnificent dive took three minutes and 18 :seconds – and the joy she expressed at the end of her performance made everyone teary-eyed. So many emotions, poured out of the petite and normally stoic powerhouse — an indelible moment forged out of hopes, perseverance and gratitude.

“I felt Sayuri with me on the dive. I felt so strong!” exclaimed an exuberant Okamoto. Celebrating her accomplishment with her dear friend and teammate, Hanako Hirose, made the moment even more special for Misuzu as Hanako was the second woman ever to reach 100m, after the world renowned Natalia Molchanova.

In addition to the leader-board and WRs there were many, many national records and individual achievements to celebrate including another Chilean title for Simon Bennett, a long-time veteran of Vertical Blue.

Other notable victories included the winning streaks of Jung A Kim of Korea and Talya Davidoff (Semrad) of South Africa who both garnered only white cards for the entire competition — a total of six white cards each.

Adding to Peru’s national record tally with verve was neuro-surgeon Juani Valdivia. (How this busy medical professional finds the time to train is beyond our comprehension!)

In recognition of what makes Vertical Blue in Deans Blue hole the best place on earth to push the human limits of physiology and freediving, we cannot forget to applaud and thank the invaluable safeties and the heroic medical team.

Not only do the safety divers escort the athletes on their depth-defying performances but they also set-up the technical operations, run the platform, manage training sessions, drill emergency scenarios, create start lists and more. In 2021 Vertical Blue was lucky to also have four medics on staff including two pulmonary specialists — who went above and beyond to care for all of the participants and crew.

The medical staff, safety team and event crew are the glue that make Vertical Blue possible. By the numbers, here is what was collectively supported by these hardworking souls:

If you missed any of the Diveye live stream, you can go to VB Freediving on YouTube and watch all of the history-making performances. You can check-out the final leaderboard and all of the standings on Vertical Blue’s Facebook page. And stay tuned for Vertical blue 2022 as we think that William Trubridge may be making his own plans. 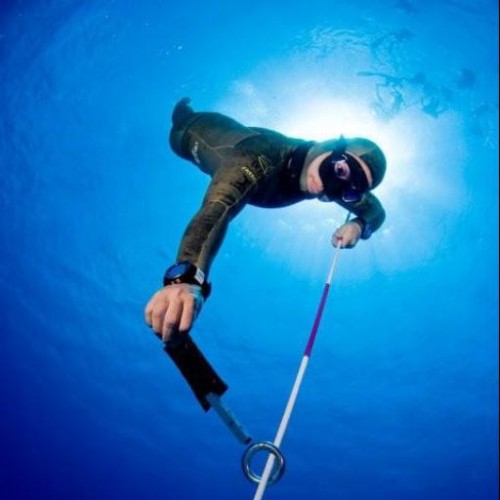