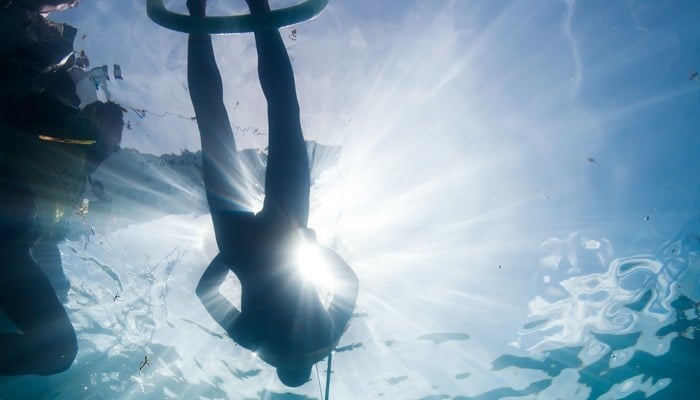 Trubridge started strong and made the 102m depth with ease.  He started his return and continued to seem strong up to 10m before the surface.  He then signalled for the safety divers to swim him up and he started pulling on the rope for support.  Once he reached the surface he had a minor black-out/loss of motor control which combined with pulling on the rope disqualified his dive.  The overall dive time was 3min 58sec.

William said “I gave it my best shot, but no world record today. At 10m from the surface I signalled to my safety divers, then started pulling on the rope. They helped me ascend the final meters, and I was out for a few seconds on the surface.Though I’m disappointed not to achieve the goal, there is some content in the fact that I gave it my utmost best shot. And so much of my motivation to pull out all the stops in this attempt today came from the numerous messages of support that I have been receiving in the lead up. Everyone, from my wife, Brittany Trubridge who helped me in preparation and surface-coaching, to the outstanding Vertical Blue crew and safety team, friends and family, fellow kiwis, old classmates, All Blacks, Steinlager, NZ media and everyone else who’s written in to encourage me onwards and downwards: THANK YOU!! I owe you a world record, and this is just a plot twist – I’ll be back to try again…“

Trubridge not only has the pressure of trying to achieve a new world record but also run the Suunto Vertical Blue competition which no doubt adds to the significant pressure felt by any athlete.