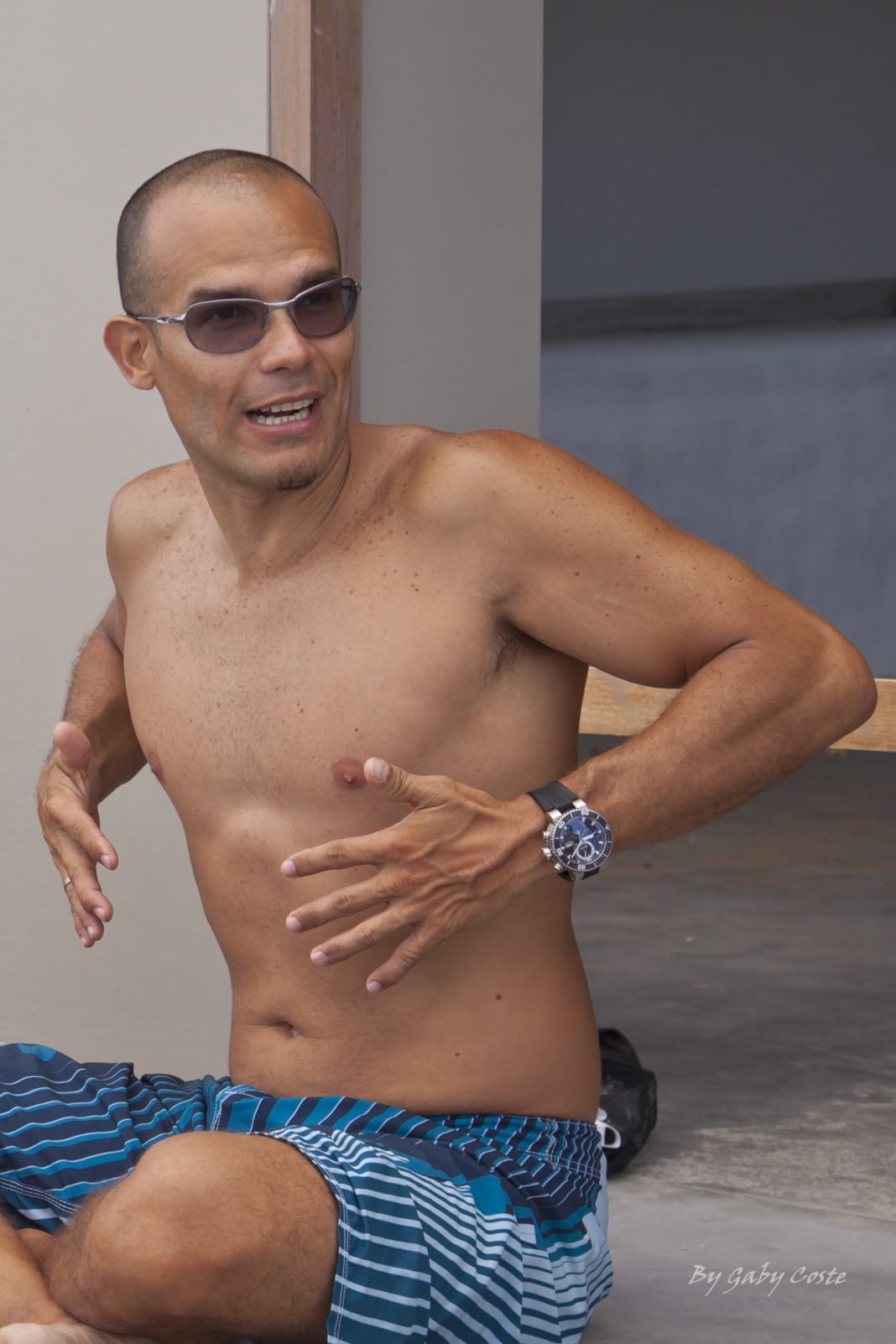 We caught up with Carlos Coste and his wife Gaby on a recent trip to the Island of Bonaire in the Caribbean at his new Freediving School A Puro Pulmon (By Pure Lung).  Coste is always pushing the limits, and his undersea adventures are sure to inspire.

Carlos started his training in Apnea or Free-diving in 1997, and was awarded his first national record in 1998. In October 2003, he became the first human to achieve a Free Immersion of more than 100 meters certified by Guinness World Records and AIDA (International Association for the Development of Apnea). Currently, he holds the Guinness World Record “ longest distance freedive with one breath (150m) in the underwater Dos Ojos Cave system ” on 3 Nov 2010, Mexico.

DB – Lets dive right in, what is the longest apnea (breath-hold)  you’ve ever  accomplished?

DB – Thus far, what undersea adventure pushed you to your furthest limits ?

CC – Every record that I made has represented a big challenge for me and my team.  But if we are talking about the hardest and deepest one, it was my No Limits trainings on 2006, when I reached -182m in my last training for a record attempt.

DB – How long has your new freediving school, A Puro Pulmon (By Pure Lung) on Bonaire in the Caribbean been operating? We’ve seen the unique training method including; visualization, TRX, yoga and underwater reef surfing. Can you tell us about it and how it came to be?

CC– We have more than 7 years teaching courses around the Ibero American region (Venezuela, Spain, México, Colombia and Peru). Gaby (my wife) and I started first base for our school, located on Bonaire around 2 years ago.

We have a complete teaching method that includes the physical preparation to improve the performance of our students for a long time, not only during the course or workshop. Our training program has different levels (Basic, Intermediate, advanced-competitive), and we call attention to how the freediver could be in good shape to perform better over the weeks, months and years after students take each  course or workshops. Then, our School goes beyond the traditional teaching system on Freediving.  Visualization session before an important depth training is a very common methodology in By Pure Lung School because in that way our students feel the power of mental training, and also learn how to do it for themselves.  We use tools like Reef Surfer board to show new approach about the pleasure of freedive.

DB – As a product tester for the Reef Surfer , explain how it works and why other freedivers might want to try Underwater Reef Surfing ?

CC –  Reef Surfer is a diving plane!,  this stylized underwater board allow you  to enjoy a unique feeling of flying in the big blue!

The sensation of the speed cutting the water is amazing!

You can control each side-angle of the blades to do tricks and fly down or up! Reef Surfer experience can be shared in Tandem mode too, opening a gate of plays and other possibilities.

Reef Surfer works pulled (with a rope) by a boat and is controlled by a freediver-snorkeler. The freediver has total control on the board inclination to go down flying into coral reef and fishes, you can go up to make a breath recovery and continue with the experience. When the freediver is more confident can move the inclinations of the blades in different directions to enjoy corkscrews, and fun tricks. Pure by Lung School is the first freediving training center offering this amazing new way to enjoy apnea diving, in a very simple way to all levels.

DB – The scientific sea turtle study you were part of was an important mission, tell us about the project and the freediving dangers encountered along the way?

Gaby C – Carlos and me were invited for a freediver friend Marco Garcia. He is a PHD Student researching about Green Sea Turtles, Chelonia Mydas. We were part of a small freediving team, our mission was to help Marco with our freediving skills to capture as much as male turtles as we could. Which were to be tagged and take some samples for studies, at Isla de Aves.  I was invited for filming and take underwater pictures.

Isla de Aves wildlife refuge is a small and isolated island located 670 km north of Venezuela. The island is one of the most important nesting sites in the Caribbean of this specie, Chelonia mydas. The high concentration of breeding individuals around the island made it possible to observe, capture and sample adult male green turtles, which are typically underrepresented in studies of marine turtles.

Marine turtles have a fascinating life history, they are long lived species that mature late and move great distances during their lifetimes. They are very good navigators, frequently migrating hundreds or even thousands of kilometers.

In last years, sea turtles throughout the world are severely reduced, without active intervention and management, marine turtle populations are expected to continue to decline to extinction. Today there are many programs for conservation of the marine turtles. This research is part of the work to conserve one of the all six Caribbean Sea turtle species.

Since 2008, around 100 male green turtles have been tagged and sampled at Isla de Aves for genetic and other studies. The procedure to capture the turtles is very complex and a little dangerous. Therefore they are wild and strong animals, they weight more than 100kg and we got them at different depths between 0-10m. When the turtles realized they were captured they fought with all the power to run away.  We worked in a team of 5 freedivers and more people on the boat. In this campaign we caught a total of 50 male turtles.

Marco received a transmitter donated from California Academy of Sciences to attach it to one male turtle. This was the first Venezuelan marine turtle to be fitted with a satellite tag. The adult male green turtle was called Carlos Coste, in honor to the multiple record-holding Venezuelan freediver who assisted in its capture. With the transmitter application we hope to begin learning where turtles are breeding on Isla de Aves and where they go outside of the breeding season. For example, where their feeding ground are located. The current satellite-tracking effort complements these studies.

We hope many people realize the importance to this kind of projects. In addition to the insurance that the conservation of marine turtles. This is guided by the biological constraints that involve local communities in conservation management.  Which help to increase knowledge about feeding, migration, mating, and resting habitats from degradation due to destructive fishing practices, pollution, debris, global warming, and many other factors.

We can live together in harmony on our planet.

DB – You are a waterman who is always pushing the limits, what is your next big adventure?

The theatrical release of director James Cameron's highly-anticipated Avatar sequel -- a movie that will feature a high amount of underwater scenes with its actors freediving -- has been pushed back from December 2021 to December 2022 due to the COVID-19 pandemic.
Read more
Freediving

How to Accidentally Set a Freediving World Record with Tanya Streeter, and Liveaboard Top Tips with Girls That Scuba Founder Sarah Richards

The 7th episode of the DeeperBlue Podcast is out today including "How to Accidentally Set a Freediving World Record" with Tanya Streeter, and "Liveaboard Top Tips" with Girls That Scuba Founder Sarah Richards
Read more

If you live in North America and are in the market for a new drysuit, the folks at BARE are offering what they call "COVID-safe" fitting sessions at select dive shops this coming weekend.
Read more