There are numerous members of the DeeperBlue.net team in Vancouver for the AIDA World Championships coverage. I certainly feel that they are the unsung hero’s of our coverage and I want to give them their own little space in the spotlight!

The team for Vancouver consists of 2 photographers and 4 editorial. So without much further ado let me introduce… 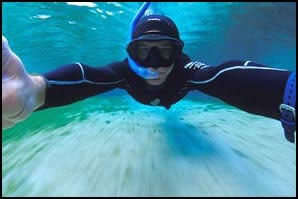 Tim Calver is a freelance photographer based in Miami, Florida. His work is heavily influenced by freediving and the lessons it has brought into his life. Tim had the opportunity to shoot stills on the IMAX film Oceanmen and has worked for such publications as National Geographic Adventure, Time Magazine and Discovery.com. Tim was the 2002 recipient of the National Geographic Ford Fellowship in underwater photography. This is his first assignment with DeeperBlue.net and he will be responsible for our underwater photos during Vancouver.

His work can be viewed at www.timcalver.com

Gareth Powell is another freelance photographer and a good friend of mine from England. Whilst not a diver he has worked on several DeeperBlue.net special features and provided some of the most memorable photos from the Sony FreeDiver Open Classic in Cyprus, 2003. Gareth will be responsible for all above water photography during the competition.

Peter is a Staff Writer at DeeperBlue.net, part of the organising committee for the Worlds and a former competitive freediver. He has produced numerous articles on DeeperBlue.net and was instrumental in the lead up to our exclusive coverage of the Sony FreeDiver Open Classic in 2003. He will be providing editorial coverage from the perspective of the organisers.

Sam is one of our experienced Staff Writers who will also be leading the United Kingdom competition team out in Vancouver. She will be providing editorial assistance, as well as providing the low-down on coaching a team at the Worlds.

Jennifer is a relative newcomer to writing at DeeperBlue.net but in the short time she has been with us she has turned out some of the most popular reportage to date. Jennifer will be joining us to help interview individual athletes and provide editorial assistance.

So, finally onto me. I’m the founder, CEO and Publisher of DeeperBlue.net and will be leading the team out in Vancouver. I’ve been diving for nearly 14 years now, mainly Scuba but have been known to attempt to FreeDive once in a while. This will be 5th Special Feature Team to be heading up and i’ll be looking after the general editorial (which means you’ll be sick of me by the end of the coverage), as well as trying to keep the rest of the team enthusiastic and on-track.