Well, hello again. I am back from cruising for almost 3 months down in Huvadhoo Atoll. It was certainly an exhilarating and interesting experience.

Huvadhoo Atoll* is a large atoll consisting of islands, patch reefs, pillars, knoll, faros** and atoll structures. See previous article Its islands are full of lush vegetation, including palm trees, and local trees, such as coconut trees, breadfruit, banyan trees, screw pines, and there are 13 species of mangroves creeping around brackish waters of some islands. Incidentally, the value of the Maldivian islands is calculated according to the quantity of natural palm trees present. It is estimated that there are 500 plant species, including introduced exotic and timber plants, of these, five are estimated to be endemic.

Fruits including bananas, papaya, watermelons, mangoes, pineapples, jujubes, custard apples, and limes; plus vegetables like green chiles, small onions, pumpkins, and gourds are cultivated. Cereals such as millet and maize; and roots and tubers like taro, yam, sweet potatoes, and cassava are also grown domestically.

Tropical flowers are found in abundance, either in the wild or cultivated in gardens. Hibiscus tiliaceus, Cordia subcordata, Thespesia populnea, and Calophyllum inophyllum are among a large variety of local timber grown for domestic consumption. The casuarina (Casuarina equisetifolia), a large, fast-growing evergreen, is being promoted by the Ministry of Fisheries and Agriculture as excellent windbreakers to shelter weaker plants from the damaging effects of sea spray.

Around 180 bird species have been recorded in the Maldives. As in other oceanic islands, sea birds are prolific (40 recorded species), with Laridae (gulls and terns), the most abundant. A non-pelagic species of this highly gregarious family is the beautiful white, or fairy tern, found in the southernmost atoll of Seenu. Noddy terns, noted for their exceptional tameness are common throughout the archipelago. Wading shore birds such as plovers, snipes, and sandpipers concentrate along shorelines taking crustaceans or probing for marine worms. Great and lesser frigate birds, who are the pirates of the air, typically breed on the numerous uninhabited islands (such as Hithadoo in Huvadhoo Atoll). The large grey heron and the rarely seen Maldivian little heron are among the 13 recorded species of Ardeidae (herons and bitterns) found here. Endemism and the frequency of unique sub-species of sea birds are high in the southern atolls.

There are also five species of marine turtles, the most frequently spotted are the green turtle and hawksbill. Olive Ridleys, loggerheads and leatherbacks have been seen but are rarely sighted. There are also 20 species of whales and dolphins in the Maldives coastal area, including sightings of sperm whales, and Brydes whales in Huvadhoo Atoll.

The dolphin families include, striped, spotted and spinner dolphins.

There are also 50 species of sharks recorded, and those which you will encounter while diving or snorkeling are white tip and black tip reef sharks, grey reefs, silver tips, whale sharks, guitarfish, leopard sharks, nurse sharks, and hammerheads. The other sharks are normally too deep for diver encounters, however, my boss did see a tiger shark quite close on one occasion in Huvadhoo Atoll.

The demand for shark fin, grouper, and sea cucumber by the export industry is high, which puts great pressure on these marine species. My last cruise was a private charter, and the guests also charted their own deep sea fishing boat to follow us around the atolls. I warned them that the first shark brought back to my boat would be thrown over board together with the person that fished it. Incidentally they did catch a hammerhead (by accident?) but let it go, alive. There are over 1000 species of fish in the Maldives alone and oh, I could go on about the exotic marine life.

During a visit to the south part of Huvadhoo I was fortunate to visit an island where they were cultivating watermelons and coconuts and were selling them to hotels up in Male. The locals were extremely friendly and were not offended by us heathens appearing in our bathing suits. However, we did try to cover up as much as possible with towels, etc. The island used to be occupied by the Portuguese hundreds of years ago, and there are still some ruins remaining.

At the start of my cruise, I was given a route to take around the atoll and spent two weeks with our cruise manager learning the dive sites, jumping points, currents, etc. After that, it was just the Maldivian crew and I, and a multitude of guests coming at different times. We also experimented with different areas when we had experienced divers on board. We grabbed the nautical charts and GPS, and pinpointed new possible diving points and had some really pleasant surprises. The coral life in Huvadhoo is practically untouched in many places. It appears that El Niño had very little effect, and my theory is that the thermoclines present in Huvadhoo have assisted the coral to maintain its health. On some dives below 20 metres the water temperatures dropped to 25ºC (from 30ºC), which makes the safety stop a very warm welcome. 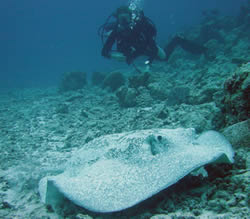 Cruising around Huvadhoo is a snorkeler and beachcomber’s delight. There are plenty of uninhabited islands, with long sandy beaches and crystal lagoons, with house reefs at shallow and deep depths and with fantastic coral reefs full of colourful acropora and swarms of reef fish. In the South, we found a group of islands split up by lagoons of only 2 or 3 feet in depth, and we took our snorkelling gear. We found tons of baby rays, (Jenkins Rays, black marble and black mangrove rays) and also a multitude of tiny juvenile reef fish, including parrot fish, wrasses, and trevally.

There is plenty of shade on the islands as the sun is fiercely hot (see my photo of my colleague and I and think skin cancer), and there not many bugs. I didn’t get one single mosquito bite in those 3 months.

One night a week we did a beach barbeque for dinner, where the boys on the boat spend an afternoon organising a great setup on the beach under the skies. The menu is always roasted spicy fish (normally red snapper as it is so tender and exquisite) and meats for the non-fish lovers. After 3 months on the boat the beach dinner was the one meal where I knew exactly what I was going to be eating and exactly the menu. Yes, we do have routines in paradise.

When we visited local residential islands we were always made welcome, and given food, or young coconuts to drink. The Maldivians are kind and quietly spoken people who are humble in their manner. They welcome foreigners and are interested in their origins. They always try to talk to you in English if they can, otherwise they always bring out their children to display friendship, and the children are plentiful. Their houses are very open and many of the outer walls of the older properties are made of shells and coral. Rainwater is collected for drinking purposes, and a reverse osmosis desalination plant was made in 1996 to supply water for Male. About 20% of the atolls do not have access to toilet facilities. (On remote islands you often see locals taking private strolls to the beach).

There are 293 atoll based educational institutions with 21 being in Male (the capital), and some 98% of the population has basic literacy. Mobile phone services now reach down to Huvadhoo Atoll since August this year.

Join me next time when we talk about the diving!!

*The term faro and atoll is derived from the Maldivian Dhivehi language.

** Faros are ring shaped reefs with deep sandy lagoons at the centre. The rim of the ring is made of shallow calcium carbonate structures with living corals and other benthic (bottom-dwelling) fauna.