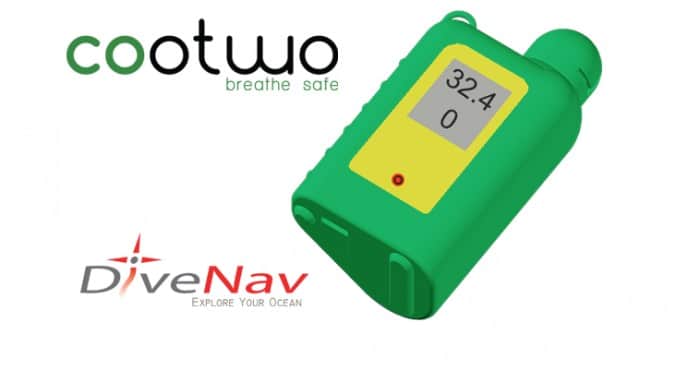 DiveNav has launched a Kickstarter campaign for a new, dual-gas carbon monoxide and oxygen analyzer.

The “cootwo” measures the percentage of oxygen in a breathing gas while also checking for carbon monoxide. It also features a temperature sensor as well as an ambient pressure sensor used to improve accuracy.

Users will be able to control the cootwo via a smartphone or tablet, doing programming, calibrating and analysis. Once that analysis is done, the smartphone creates a log automatically.

The cootwo, which sports a rechargeable Lithium-Ion battery, will also feature its own display, allowing it to be used as a stand-alone device. It will also be able to save the log of the analysis internally for later retrieval via a smartphone or a tablet.

But that’s not all: the cootwo could also be used as an environmental data logger to sample and record temperature, pressure, oxygen and carbon monoxide in the surrounding environment.

DiveNav is also developer of the Nitroxbuddy, a smartphone Oxygen Analyzer for scuba divers, and the cootwo will be compatible with DiveNav‘s My Nitroxbuddy app for both iOS and Android devices.

To learn more, check out the cootwo Kickstarter campaign page.