Editors Note: Following on from last weeks Part I Christopher conintues his journey around Vancouver

After I arrived in Nanaimo, I drove three blocks to the Buccaneer Inn, a cute and diver friendly lodge.  There are thirteen rooms total: ten regular suites, two studios, and one large fireplace suite.  Each suite features a full kitchenette, and all the rooms have free high speed wireless.  If you don’t have your own laptop, they’ll lend you theirs to check your mail!  I slept like a log, and not just because I had a good long day of diving, but moreso because the bed, with its pillow top and down duvet, was honestly the most comfortable I’ve ever experienced while traveling. 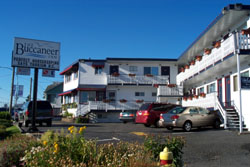 The proprietors, Dave and Marlene, are familiar with the unique needs of diving guests, and have created a secure drying/storage area for gear and suits.  When you return from your dives, there is a fresh water rinse, and if you’ve already checked out, they have a shower and fresh towels downstairs so that you can freshen up and enjoy the rest of the day without the salty grit.

Just a few minutes from the Buccaneer Inn, you’ll find Ocean Explorers Diving, one of the oldest and most experienced dive operators in Nanaimo.  The two establishments maintain a close relationship and offer convenient dive/lodging packages.

The Ocean Explorers shop is basically across the street and down the block from Buccaneer Inn.  You can walk, or if your gear is less manageable, you can drive over.  Generally, for the morning dives, you’ll meet at the shop at 09:00am, where you’ll be greeted by the divemaster as well as by the owner.  The charter includes tanks and weights, and Nitrox is available for a nominal fee. 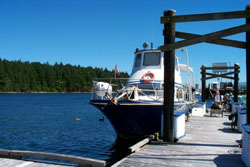 Ian, the owner, is one of the friendliest people in scuba, and is extremely knowledgeable about local diving, conditions, and history.  Prior to boarding, Ian and his staff will help ensure that everyone is fully equipped and prepared for the trip.  This “no surprises” approach is thorough and uncovered several potential “gotchas” for some of my fellow divers, but because they handle this in such a helpful and accommodating manner, missing hoses and faulty computers were replaced in a jiffy.

Ocean Explorers has two charter boats. The 22.5’ “Seastar” is quicker and can nimbly navigate sites like Dodd Narrows, where a larger craft can be unwieldy.  However, if there are six or more divers on board, you’ll likely take the 53’ “Christie Bay No. 1”, a former Royal Canadian Mounted Police (RCMP) patrol boat.  This larger boat has a dry area below deck that is great for changing and relaxing in between dives.

Our first dive was on the Cape Breton, a WWII Naval Vessel that was sunk in 2001 just off Snake Island.  At 441’ in length, she is the second largest diver prepared artificial reef in the world (only the Spiegel Grove in Florida is larger).  She lies in roughly 130 feet of water, with her deck at 110.  Like most artificial reefs of this size, the Cape Breton has several mooring buoys.  A favorite place to tie up is the center line which leads down to the funnel at 70’.  From that midship point, you can choose to go towards the bow or stern.  With good air consumption and favorable conditions, it’s certainly possible to navigate the entire ship.

She sank quite quickly, and when her 22 million tons came crashing into the ocean floor, her deck buckled and she split open on the port side, and crumpled on the starboard.  It was right around the ripple in the deck where I saw my first swimming scallop.  Having never seen such a thing, my first concern was that I might be narced, but as I watched the scallop flutter off and reposition itself, I knew that I just witnessed something special.

Aft of the funnel, you’ll find the skylights which lead to the engine room.  Here, and at various entry points around on the wreck, you’ll find signs reminding divers that penetration should only be attempted by those with proper training and equipment.  In this particular case, the engine room is also considered an advanced penetration because of the depth.  While the ship rests in 130 feet, the Breton’s dramatic landing caused her keel to bury itself well past the mud line so you’ll find the bottom of the engine room well below 145 feet (depending on the tide).

The entire ship is decorated with many plumose anemones (metridium giganteum), orange and white alike, but if you continue aft you’ll find them in such great abundance that the helideck has also been nicknamed “mushroom garden”.

Even the jellies can grow to be enormous in these nutrient rich waters.  Twisted around a railing near the wheel house, we found a giant Sea Blubber jelly whose disc was easily larger than a man’s torso.

During our extended surface interval, Divemaster Terry explained that there is an engraved disc/token on each of the wrecks (actually there are two on the Cape Breton) that entitles the finder to a Citizen dive watch courtesy of Citizen Watches and Grassick’s Jewelers in Nanaimo.  Despite the fact that they are regularly cleaned to prevent overgrowth, the one on the Saskatchewan has eluded thousands of would be treasure hunters for eight years.

The RivTow Lion, the newest artificial reef in Nanaimo, also bore a treasure token until recently.  A very pleased Johanna R., who was visiting from Edmonds, Washington, claimed it just last weekend.

HMCS Saskatchewan was sunk in 1997, and lies just a few hundred feet from the former HCMS Cape Breton.  We tied up to her radar tower whose present mooring line is unusually thick.  As I descended, I couldn’t help but feel like a child whose hand barely makes it all the way around his dad’s finger.

The top of the radar tower is in 45’, which was still a bit hazy as far as visibility was concerned.  As I descended past 60 feet, the ship, and its bridge, with which I was nearly level, suddenly went from a blur to a clear image.

The fact that this wreck is several years older is apparent from the lush covering of life.  Some of the inhabitants of this wreck were larger as well.  Just below the bridge, I came across a gigantic lingcod.  Its head was larger than mine, and measured against the door it was blocking before I arrived, its body was in excess of five feet.

The Saskatchewan is extraordinarily diver friendly.  With entry and exit holes cut in strategic places throughout the ship, there are very few areas where one is not able to simply follow natural light to an exit.  Additionally, spraypainted throughout the ship’s interior are indications of your location, as well as directions to the bow, stern, and nearest exit.

As I swam along the dark central corridor, enjoying the albino fish-eating anemones, my light shone ahead and landed on a swimming crinoid.  Its arms undulated majestically to carry its fragile body down the passageway, and I watched in awe as I fully realized that I was in another world.  With the dark ship all around me, and nothing but my flashlight illuminating this alien being, I felt as if I were an astronaut hovering weightlessly in space.  And then it occurred to me I was in space – Inner Space.

Back on the mainland a few days later, I made arrangements with Kellie, the instructor I dove with the previous weekend, to go out on a “school night” for a night dive.  Coincidentally, Ocean Quest is just a few blocks away from the BCIT (British Columbia Institute of Technology) campus in Burnaby, where my meetings were being held, so I stopped by on Tuesday afternoon and spoke at length with Todd Powell, the manager and Technical Instructor Trainer. 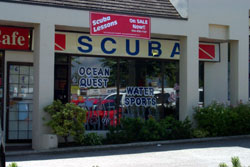 Ocean Quest prides itself on “pure service”, and tries to focus on smaller classes.  Greg, the resident Course Director is also the shop’s owner.  Before I left the shop to head back to my meetings, I made arrangements for tanks and weights, which Kellie was kind enough to gather before she came to pick me up later that evening.

We arrived at Whytecliff well after sunset.  There is not much artificial lighting in the parking lot, so the spots to have are those directly in front of the picnic tables.  If you park head in, you can use your car’s headlights to assemble your gear and to later look for things that the gremlins might have moved in the dark.  As luck would have it, the moon was nearly full that evening, so gearing up and walking down to the site was pleasant and easy. 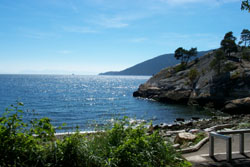 As soon as we entered the water, the bioluminescent plankton was evident.  Larger, denser, and brighter than any I’d ever seen, some of the particles must have been 2mm in diameter.  Every few meters during the swim out to the marker, I’d put my face in the water and watch my fins and legs appear as if they were on fire.  Looking over at Kellie, I could see eddies of the current trailing behind her fins.

As bright and exciting as the bioluminescence was, it did remind me that the plankton layer was thick, and just like the daytime dives the previous weekend, the first twenty feet were quite murky.  We descended near the marker, and then after checking in with each other, we immediately began descending along the slope and followed the wall towards the cut.  Again, .like our previous day dives, visibility opened up substantially past the thermocline at 59 feet.  We continued along the metridium covered wall where the crinoids were out in greater numbers because of the dark.  We entered the cut and were just descending below 79 feet when Kellie motioned me over to a crevice.  Inside was a Giant Pacific Octopus, whose largest suckers were at least quarter sized.  It was hard to imagine the animal’s full size because it was occupying such a small space, but it was large!  We stayed there and stared for some time — long enough to notice that there were a number of tiny shrimp in the crack along with the octopus, apparently hired to do some clean up work. As the shrimp would pick at invisible debris or parasites, the affected sucker would “wince” as if it were painful or tickled.  It was amusing to see such a tiny and almost insignificant creature affecting another so much larger than itself.

We continued on and descended a little further and deeper into the cut, but the current was starting to pick up, so we decided to turn back and enjoy a more leisurely swim.  Along the way, I noticed several large sea pens below.  One giant orange specimen was 20” long (measured tip of finger past elbow) and more than 6.5 inches wide (measured against my flashlight)!  Did I mention they grow ‘em big up there?

In the shallower waters, the Dungeness crabs abounded.  Some were squabbling over mussel shells, some would burrow into the sand as we passed, and others would just run around in wide circles to escape our lights.

We were hoping to see some of the seals that like to play in the cut at night, but they didn’t join us.  However, as I often tell my students, “any dive where you see an octopus is a good dive.”  Make that a Giant Octopus, and it’s phenomenal.  It took days to wipe the smile from my face.