I have a new hero, and his name is Rob Stewart.

The Canadian born photographer and filmmaker never held a video camera before he began the Sharkwater project — but that is not apparent when you see the film. On the contrary, the imagery is beautifully framed, inspiring, and stunningly breathtaking. The images that Stewart sets forth will awe you, and will capture your heart. 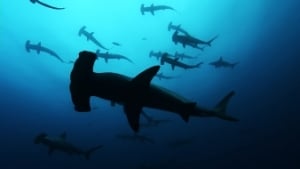 Stewart set out to create a film that would simply depict how beautiful sharks are in their natural habitat. The finished product, however, ended up evolving into so much more. Instead, we’re drawn into an amazing story of human drama, organized crime, corruption, and greed.

The film kicks off with clips from military training videos archived from the 1960s. As might be expected, they depict sharks as ruthless and bloodthirsty man-eaters. The clips belie the ignorance of their times with suggestions such as putting one’s face in the water and yelling to deter a marauding shark.

While it provides an almost humorous relief to the serious subject matter, it is important to realize that 40 years ago, these films were definitive and authoritative. Forty years ago, we held these precepts to be truth. We look back and laugh, because now we know better. …Or do we?

The chasm between reality and the popular beliefs sustained and fueled by exaggerated media is still enormous.

In reality, sharks do not eat people, and they are not mindless killers. As long as people view sharks as dangerous predators, they won’t care about saving them, and this is exactly what Rob Stewart hopes to change.

Early in the film, Stewart begins to debunk some of the mystery and fear around sharks as he holds and pets an eight foot long Caribbean reef shark as if it were a lapdog. From this point on, his understanding of sharks and his community with the underwater world is evident.

In an effort to capture even more compelling underwater footage of sharks, Stewart joins renowned conservationist Paul Watson and the controversial Sea Shepard team aboard the Ocean Warrior. The team is invited and implored by the President of Costa Rica to help patrol the waters surrounding Cocos Island, one of the places celebrated as a gathering area for sharks, and where illegal shark fishing often takes place.

Complete with colliding ships, gunboat chases, espionage, corrupt courts, and spurious charges of attempted murder, the adventure that ensues is nothing short of epic. 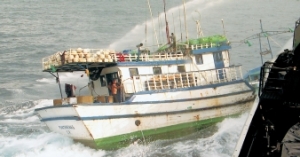 Organized crime and conspiracy surrounding the shark fin industry is deeply entrenched. With dried fins sometimes fetching in excess of $400USD per pound, it is a multi-billion dollar industry rife with greed and corruption.

But it is more than corrupt government officials, or the “shark-fin mafia” that threaten Stewart’s life. Shortly after the entire crew must hurriedly flee from Costa Rica, Stewart is diagnosed with necrotizing fasciitis, the “flesh-eating” disease. Rare but deadly, the disease threatens to claim Stewart’s leg, and possibly his life. Alone, with only hope by his side, Stewart remains bedridden in a Panamanian hospital for an agonizing week before doctors can make any prognosis.

Determined more than ever to make a difference, Stewart defies reason and returns to Costa Rica. Knowing he would be arrested on sight, he and his crew must sneak back into the country. Ironically, when they arrive in Puntarenas, they are able to blend in — Protesters line the streets, demonstrating against shark finning and illegal shark fisheries. “Costa Ricans were rallying for sharks. . . I realized our adventure had helped awaken a country”, remarks Stewart with renewed faith. 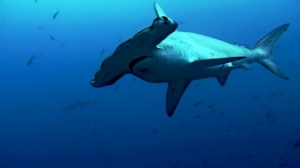 Over the next four years, Stewart shot more than 400 hours of footage in 15 different countries. In addition to interviews with shark and conservation experts like Erich Ritter, Patrick Moore, and Rex Weyler, Sharkwater includes commentary from average beachgoers, showing how desperately fear and hate of sharks are ingrained. As one Australian angrily believes, “they’re the scourge of the ocean, and everyone should go and catch one.”

Sharks have been an integral part of the oceanic ecosystem for 400 million years, but their populations have declined by more than 90% in the last 50 years alone. It is estimated that more than 100 million sharks are killed for their fins each year. 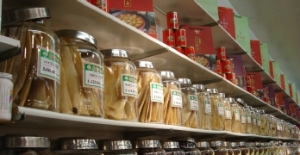 Shark finning is neither humane nor sustainable. Any shark is taken, regardless of size, age, or species. After its fins are cut off, the shark is thrown back into the water. Unable to swim, and bleeding to death, the shark suffers a slow and torturous death.

Much of the demand for the fins stems from shark fin soup, a traditional asian dish often served at weddings and special events. Once a rare delicacy consumed by Chinese aristocracy, the dish is viewed as a symbol of status and power, and is gaining in popularity as China continues to modernize and its 1.2 billion people become more affluent.

Indeed, there is an uphill battle to be fought, but there is hope.

The Sharkwater crew interviews one Chinese bride who, defying long tradition and facing cultural stigma, makes a statement by refusing to serve shark fin soup at her wedding banquet. We can only hope that this — what is now seen as a controversial decision — will eventually become the norm.

With its spellbinding cinematography and riveting story, Sharkwater has won awards at every film festival where it has appeared. Sharkwater will change the way people view sharks and the ocean. It will open their eyes. . . and, hopefully, their hearts.

Sharkwater’s initial theatrical release is scheduled for Spring 2007, by Alliance Atlantis. For more information about Sharkwater, or to see the movie trailer, please visit www.sharkwater.com.

PADI Calls For Nominations For A 2021 Sea Hero