Saturday May 5th was an extra special day for Iru Balic, Grant Hogan and Nick Mevoli. On just the second day of Performance Freediving International’s annual depth competition these three athletes each claimed their own new national titles.

“I am so happy to see our PFI Instructors doing well at Deja Blue III,” said Kirk Krack, president and co-founder of Performance Freediving International , “and I am even more thrilled to see the new PFI students of our affiliate instructors, doing just as great. I could not be prouder of the myriad world class performances we are seeing this year.”

Iru Balic surfaced from a free immersion dive to 42 meters after two minutes and :05 seconds to receive a white card from the judges and the Venezuelan Women’s national record for FIM. “My dive was fantastic!” proclaimed the 26 year-old beauty from Caracas. “I am so grateful for the support of my training partners at home like Amber and Carlos, and for the great new friends I’ve made here at Deja Blue III.”

Grant Hogan is making his second appearance at the annual PFI comp, having made his mark last year as a contender in no-fins. This year Hogan fought his way through an extremely tough dive to 71 meters to reclaim his US Men’s national record from Rob King. Emerging from the water after three minutes and :01 seconds Grant was more than relieved to see a white card. “I woke up on Saturday and told myself that no matter what happened I was going to complete the dive successfully, and I stayed focused on getting it done.”

In December of 2011 Nick Mevoli decided he was going to go after the USA title for constant weight and that he was simply going to take it. More than a relative newcomer, Mevoli is a freediving prodigy. “I’ve always wanted to compete — I looked at all of the records and decided that CWT was the one to beat,” offered Nick. “My mind was set that this was something I was going to achieve. I am quite pleased!”  As he should be having been only a 30 meter diver in January of this year. After intense training sessions with Ted Harty of Immersion Freediving, Nick quickly became a 70 meter diver in only a matter of months. “Ted gave me an ass-kicking” chuckled Nick, “and I am thankful for his help.”

Coupled with his steely focus, Mevoli’s trust in God guided him through his record-setting dive. Nick’s 91 meter dive under constant ballast took three minutes and :10 seconds. This 91m CWT is Nick’s first national record and his very first competition.

The 30 year-old Florida native, who now lives in Brooklyn, New York works as a prop operator on the popular TV show Gossip Girl. Nick laughs as he recounts “my friends back home always tell me how it’s funny that the deepest person in Brooklyn works on the shallowest show!”

We expect to see much more from this natural talent.

DeeperBlue.com congratulates all of the athletes and their terrific achievements. 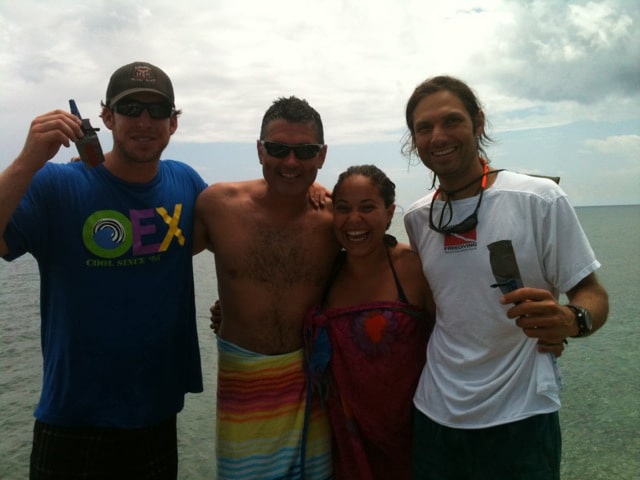 In ‘Project Shell,’ VR Headset Gives People a Turtle’s-Eye View of the Ocean