A Salute to Sponges that don't wear Square Pants

There seems to be a trend as of late involving sponges and a large amount of air time on TV. Contradictory to what you might imagine, most of the attention has been focused on one sponge in particular. Not one species, but one particular sponge. Are you ready kids? It’s that absorbent and porous and yellow guy named Spongebob. He seems to be everywhere these days, including, and not limited to items such as boxes of cheese crackers, Band-aids, pillows, Pop-tarts and shockingly, underwear.

Don’t get me wrong, I’m not knocking the little guy, but I am here to bring a little fact to the farcity about sponges. True, without the help of a side-kick Starfish and some spongey misadventures I don’t think a half hour of sponge factoids would capture a roomful of fourth-graders the way Spongebob does. But I do believe that some of these factoids will leave you in awe of our porous friends. 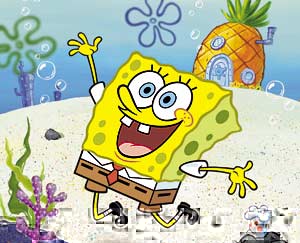 Here are the top 5 reasons to appreciate Sponges that don’t wear square pants:

1. Scientists believe that sponges were the first animals ever!

2. They have mastered the ability to mate without moving a muscle

3. One of the few critters that can smoke underwater

5. They don’t have an annoying laugh

Silliness aside, sponges are actually cool critters. Their regenerative abilities should serve as case and point. For example, scientists have found that when the freshwater species of sponge, Ephydatia fluviatilis, is broken apart and then left alone, the separated pieces settle and eventually reorganize themselves into a near replica of the original adult sponge. This bit of weird science is primarily due to the fact that there are only six types of sponge cells, the major ones being choanocytes, pinacocytes, amoebocytes and lophocytes. Each one of these cells has its own specific function and additionally has functions in relation to other cells. With that smidgen of information, perhaps it is a bit more conceivable how this organism reorients its body parts once they’ve been separated. Essentially, a grouping of these cells is collectively referred to as a sponge.

Other interesting sponge behaviors to take note of include carnivory and locomotion. Yes, we’re still on the topic of sponges. We’ll start with carnivory as I can only imagine the images coming to mind. In 1994 a new species of sponge was discovered in a cave near Marseilles, France. The behavior that was particularly remarkable was the sponge’s propensity for eating small crustaceans. Rather than simply filtering the water that passed through its body like most species, the sponge had adapted the ability to ensnare prey externally with its typically internal structural elements. These structural components, or spicules, act like Velcro to trap the prey and while other sponge cells slowly surround the organism and digest it.

While one would assume that most sponges are sessile creatures, one scientist in North Carolina observed locomotion in several freshwater species. He recorded migrations of up to 4 mm a day. While this is nothing to pull out a stopwatch for, it is something to take note of as most descriptions of the Phyla Porifera make some mention of the word sessile. You live and learn.

Sponges are the stars of the phylum Porifera (this having no bearing on the fact that they are the sole members). The body structures of sponges are characterized by numerous holes, known as pores, for which they are named. The Latin word Porifera translates to ‘pore-bearing’. The approximately 5,000 species occur in all seas and oceans around the world. Though seemingly benign critters, sponges significantly contribute to water clarity and quality. Evolving approximately 550 million years ago, sponges are the most primitive of all multicellular animals.

Since the regenerative abilities are limited to one species, all other species of sponges posses necessary structural components. Spicules, tiny threads of silica, and spongin, stringy fibers of protein, are the two structural components. These two components combine to create a fibrous, internal skeleton for the body structure. The internal structural components add strength and aid in maintaining their shape. One large opening for exiting water flow is also a characteristic of the body structures of sponges. Though not all species are restricted to just one opening, most have a sole excurrent opening. The large opening of upright sponges is referred to as an osculum. 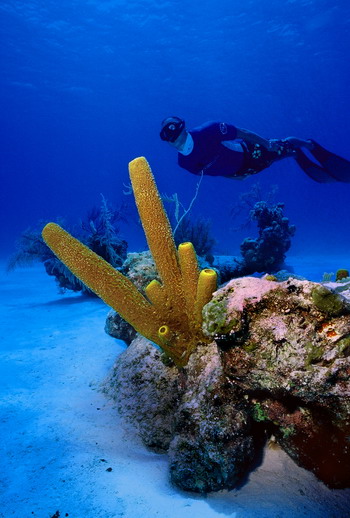 Most sponges are filter feeders. They feed by creating a current through their body structures. The surface of a sponge’s body is covered by a skin, one cell thick. This skin is penetrated by numerous small pores and a few large openings. These are the entrances and exits, respectively, for a complex system of canals and chambers through which the sponge pumps a current of water. Water flowing through sponges provides food and oxygen, as well as a means for waste removal. This flow is actively generated by the beating of numerous small and hair-like flagella that line the interior canal walls of sponges. The volume of water passing through a sponge can be enormous, up to 20,000 times its body volume in a single 24-hour period. In addition to filter feeding, several sponges contain the symbiotic algae characteristic of corals, known as zooxanthellae, living in their tissues to provide the sponge with nutrients as a result of photosynthesis.

Variation in separate species of sponges occurs in terms of their shape, size and color. Typical body structure shapes include baskets, cups, tubes, vases, barrels, bowls, flattened and encrusting. Both color and shape are useful tools for distinguishing between various species of sponges. However, both characteristics are occasionally misleading as individual sponges vary even within a species. Therefore, a positive identification underwater based on color and shape alone is rarely accurate.

While most organisms are deterred by the noxious components of most sponge species, others are immune and feed on the sponges for nutrition. There are also some organisms that actually utilize the toxic components to their advantage, nudibranches and bristleworms are two examples. The noxious flavor is an important defense for sponges, as these sessile invertebrates do not have the ability to flee (at a reasonable speed) from potential predators.

Sponges reproduce by both asexual and sexual means. The species that reproduce sexually are typically hermaphroditic and produce eggs and sperm at different times. When sperm is broadcast into the water column, often it is so concentrated that the sponge appears to be ‘smoking’. The sperm is released into the water column in the chance that it will be pulled through the canal system of an ovulating sponge of the same species.

Asexual sponge reproduction occurs by one of two ways, dividing into fragments that eventually develop into whole sponges or budding. In one form of budding, the buds form on the parent sponge, break off with the passing current and float away to propagate a new area. In other species, the buds remain attached to the parent sponge and give rise to the formation of a colony of sponges.

Though not all sponges live in a pineapple under the sea, or have a half hour of nautical nonsense devoted to them, they do have a bit of distinctiveness that somewhat sets them apart from the typical household sponge. Hope you absorbed all that. Yuk yuk yuk.

How to Choose the Best Suit for the Conditions

To help you BARE the conditions, we took a look at the various temps our suits cover and which one is best for you and your local aquatic playground.
Read more
Scuba Diving

The folks who built the Amphi, the first hands-free underwater scooter, are really close to reaching their crowdfunding goal to finalize development and produce the first batch of Amphi scooters.
Read more

The National Park System and the NOAA Marine Debris Program have announced a partnership to increase outreach and awareness.
Read more

Preserve A Loved One’s Memory With A Reef

You can now remember a lost loved one with a memorial reef in the ocean.
Read more