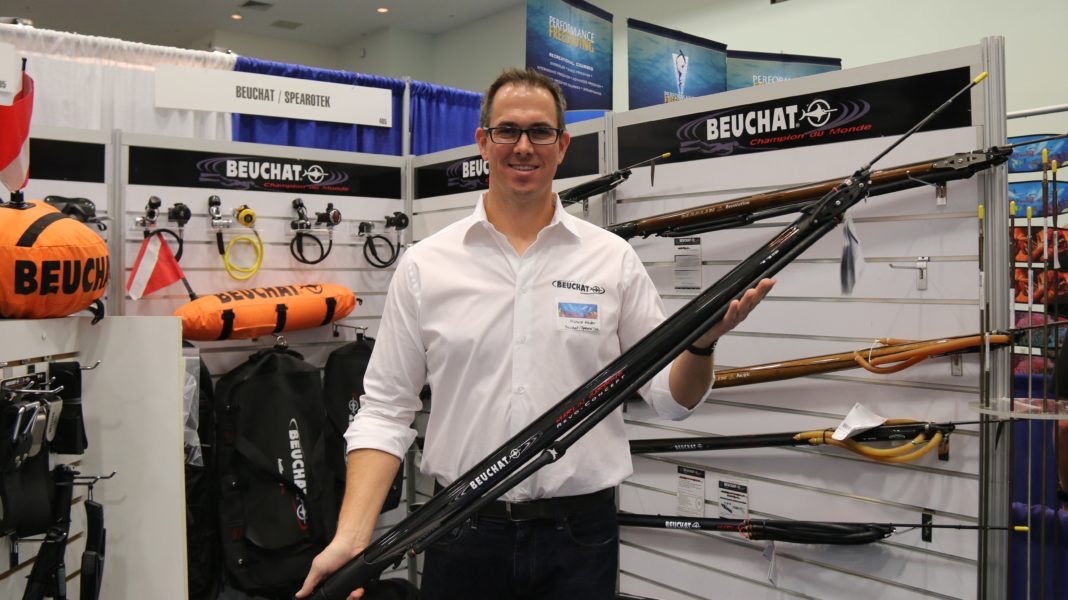 DeeperBlue.com roamed the exhibit hall, stopping to talk to a mix of different exhibitors showing off their wares:

Beuchat is featuring its new Revo Concept speargun, made of all-carbon fiber. In developing it, the company did away with the teak from the previous Revolution model and installed a single band compared to the Revolution’s two bands. By simplifying the design, Beuchat was able to bring the price down by “almost 50 percent” of the cost of the Revolution, according to a company rep.

Cutting Edge Marine Products was showing off its Fin Holder And More removable pocket storage system. Even if you don’t own a boat but are going on someone else’s boat, the Fin Holder And More can be hung off the hand rail with all your gear safely inside and not cluttering up the deck. Dive equipment can be expensive. If somebody steps on your mask before you go diving and it’s broken, what are you going to do? It was field-tested for four years before Cutting Edge brought it out to the public last March at the Miami Beach Boat Show.

Originally launched in 2003 at DEMA Show, the newest Fold Spear model feature much stronger and thicker tubing made of anodized aluminum and stainless steel. Older Fold Spear models had thinner tubing, were lighter and easier to bend. The newer model is a much tougher, straighter, more accurate spear that comes in three sizes: four-, six- and eight-foot lengths. They all go into the same holster, which has the stainless steel grommets allowing water to drain.

Sling-Fish was showing off its newest carbon fiber spearguns. The barrel features a fully-enclosed track; it “just came out of the mold the day before the show,” according to a company rep. Sling-Fish will also have a new set of pole spears coming out soon, made out of carbon fiber brass or carbon fiber in six-, seven-, eight- and nine-foot-long versions.

Sportube — appearing for the first time at Blue Wild — had its line of hard-shell travel cases for spearfishing gear on display. While the company is still largely ski- and snowboard-centric based in Colorado it “fell into the speargun business almost accidentally over the past 10, 12 years with people like Daryl Wong and Sheri Daye coming to us and saying, ‘You know, your cases are actually fantastic for spears and fins and wetsuits and what not,’ so we decided to reach out to this market,” according to a company rep.