Ever been swimming or diving and encountered a cute little blowfish, fully blown up like a beach ball and displaying all his spines to you? This little fellow is part of the family

Tetraodontidae, is a family of highly toxic fishes.

However, this doesn’t seem to bother the Japanese in the slightest. FUGU, which is the general name for fish falling under this category, is a highly sought delicacy and is the epitome of Japanese gourmet dining. While fugu is declared as the most exquisite eating of all fishes, it is also the most dangerous and sometimes fatal.

There are nearly 1000 kinds of fugu, and 38 of them are found in Japan. The ovaries, liver and skin are the main toxic part, containing tetradoxin, a poison so potent, it is 1,250 times stronger than potassium cyanide, and the amount of tetrodoxin found in one large fugu is enough to kill 30 adults. (Or before you can spell tetrodoxin out loud).

The U.S. Food and Drug Administration classifies fugu poisoning as a "rapid and violent death," i.e., nausea, convulsions, then paralysis, then total respiratory failure. There is no antidote, perhaps because the toxin has a molecular structure unlike anything previously known to organic chemists.

Ever heard of people saying that they feel like a zombie? In Haitian, it means "spirit of the dead". According to widespread Haitian beliefs, voodoo sorcerers (bokors) would administer a ‘magic powder’ to their victims. Part of this powder is derived, no less, from puffer fish. In 1982 a young Harvard ethnobotanist, Wade Davis, visited Haiti to study the supposed existence of the zombie, and bought zombie powders from witch doctors. Upon analysis of the powder Mr. David found parts of a puffer fish, which apparently were used to enforce progressive limb paralysis, (hence limited speech capability and slow movements) and hallucinations. They could then use these people as slaves. Davis’ experiments on animals showed that paralysis occurred while their nervous system and heart remained active. Scary stuff. (La Chimica e l’Industria (September 2001, number 7, p71))

Statistically, fugu deaths in Japan range from 70-100 fatalities each year, mostly due to improper preparation methods, or because diners insist on eating the organs. To each, his or her own, I suppose. 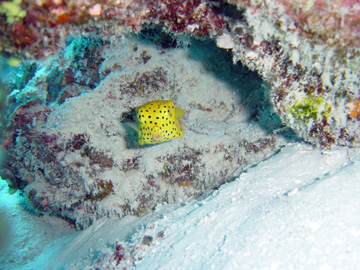 In the Maldives, there are many varieties of puffers, trunkfish, and tobies, almost all of which have some poisonous internal or external organs. Should you incur a cutaneous injury from one of these fish, the "book" says:

Immerse the wound in 45C/115F water, or as hot as you can tolerate, for 30 to 90 minutes. Many marine toxins are proteins which are destroyed by heat, much like what happens to an egg when it’s hard-boiled. A hot soak can dramatically reduce the pain and amount of damage, caused by a sting.

If ingested, gastric lavage and respiratory support are indicated, usually for 24 hours or more. But after reading up on this subject I would wish good luck to anyone who has had contact with on of these highly dangerous animals. So, the next time you’re in the mood for a little culinary Russian roulette, keep in mind that your first encounter with fugu could be your last. Bon appetit!