We’ve all got dark lil’ secrets and insecurities. Even if these are thick and convoluted, the kind that only shadowy seedy alleys, ancient hallucinogenic plant remedies procured by wise elders in the mountains of Oaxaca, very perseverant therapists armed with an assortment of the latest best selling happy pills or painful and embarrassing public acceptance could begin to unravel, it is to the benefit of our growth to confront them. And so, I’m here before you to confess a humiliating secret of mine:

For the longest time I’ve suffered from whale shark envy. There, I said it.

I mean, I’ve been diving for years, and teaching for most of those. Been to Galapagos, even lived in Sri Lanka for a while, went to Belize, the Honduran Bay Islands and a few other places that supposedly were good bets for sightings. And yet, time after time, nothing. I started to think I just wasn’t meant to see one. Not me. Whenever I found myself in the midst of a group of divers talking about their ‘mind blowing’ whale shark encounter my heart would pound, sweat would pour and in a mix of pain and anger I would wish I had never even heard of them darn beasts, wondering if for the rest of my life I would have to settle with going to Japan or the Georgia aquarium to merely see one in captivity. 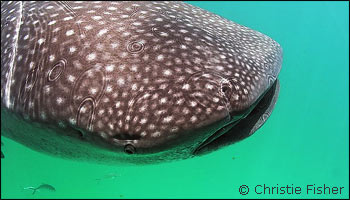 But alas, after almost a decade of frustration and shame it happened for me. And I didn’t encounter just one, oh, no siree, I actually swam for more than a couple of hours with 12. Yup. A dozen! It wasn’t a 5 second thing either. I swam for so long, so many times and so close to them that when I finally came out of the water I could do nothing but smile, feel the long held anguish finally being expelled out of me like fizz from a well shaken carbonated bottle of psychological sugary drink and think that without a doubt this was the day I should start playing the lottery.

Where? Mexico! Yes, yes, the Yucatan peninsula is quite prosperous with divers’ treasures and whale sharks during the months of June, July, August and September definitely make for some of the nicest to go admire. I went on a snorkeling boat tour through Ecotravelmexico.com, and we left out of Punta Sam, but more on that later.

Now, what’s the ‘big’ deal, pun intended, about these fellows? Well, size is obviously one, since the Rhincodon typus (that’d be the way you say whale shark in academia) is in fact not only the largest living shark but also the largest known fish, and just to highlight its uniqueness it also happens to be the sole member of the family Rhincodontidae. But to be in close proximity to one of these gentle, elegant giants does things to a diver that are hard to describe in a science class. Call me drama-trauma-baby but chances are your first time being in the water with a whale shark close enough to you it could count the bits of plankton stuck to your nose hairs is something you’ll remember for longer than most of your other first times.

Even though not much is actually known of these innocuous goliaths one thing is obvious, they are rare. The Shark Research Institute, a non-profit organization dedicated to the promotion of public awareness of sharks and their vital role in the marine ecosystem mentions in its site that only 320 sightings had been recorded in all of western scientific literature as recently as 1986. That’s certainly not a lot. They also tend to aggregate during specific seasonal periods, which is how I got to see so many in Mexico, but unfortunately they do this also in areas of the world where the circumstances of culture and necessity makes them the prime target of some fisheries.

Again, the Shark Research Institute sites as an example how three villages in India slaughtered some 1,000 whale sharks in 1999 alone! The Georgia Aquarium, for example, the largest aquarium in the world and also one of only two aquariums in the world to have successfully attempted to keep a whale shark in captivity, the other is in Okinawa, Japan, got their two whale sharks, Ralph and Norton, by buying them off a Taiwanese fishery which had caught them for human consumption. 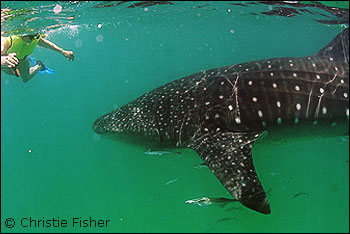 Whale sharks are filter feeders, meaning they swim slowly (that’s in reference to other sharks, of course, since even trying to keep up to them with fins and snorkel would definitely count as a rigorous cardio workout) close to the surface with their huge mouths open, feeding on phytoplankton, tiny plant life or zooplankton, tiny sea criters, squid and small fish. Although they do have about 300 rows of teeth, these are very small. They never chop up their food with them, they filter feed with their gill rakers, or very small hooks found on their gill arches, which act like sponge-like filters. That said they have been known to position themselves vertically, head up through the middle of plankton agglomerations or schooling fish. At times small fish might enter their mouths thinking they are entering a cave they can hide in while being chased by predators like tuna. Once the larger fish enters the shark’s mouth this can dart upwards through the surface of the water, allowing gravity to throw both fish down into it’s stomach. Not a bad strategy for an animal with an apparently insignificant brain, huh?

They are also known to be able to pump water into their mouths and filtering system by moving their head from side to side while opening and closing the mouth up to 28 times per minute, creating a suction that can draw prey into them. Along their sides, starting from around their first dorsal fin, they have lateral ridges, at the valleys of which they have a formation of nerves that can ‘feel’ the water pressure, thus sensing the size and distance of a swimming colleague, prey or for that matter an out of shape struggling snorkeler.

Another peculiarity is apparently what they do when they feel they’ve consumed the equivalent of 2 week old sushi, they can force their stomachs out of their mouth to expel whatever it is they feel is making them gag.

Very little is known about their courtship and mating habits, due to the incredibly large distances whale sharks travel. However, not long ago heated scientific debate was settled as to how the young are born. A female shark also caught in Taiwan was discovered to have up to 300 pups inside its twin uterus, proving that the pups develop inside egg cases but eventually are given birth as live pups. Apparently these can be up to 2 feet (60cms) when they are born. Young adults don’t seem to reach mating age until their late 20’s, having a life expectancy of over one hundred years. 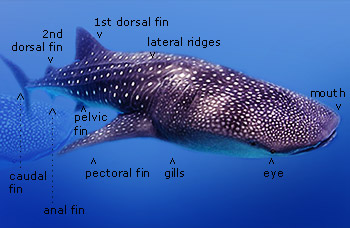 Being aware of how little is known about these huge fish, my experience in Mexico was uplifting. The government seems to be keen not only on keeping tabs on the number of whale sharks that come to feed during the summer months on the tip of the Yucatan peninsula but also on making sure protection as needed is offered to them. The tagging project established by the Mexican agency CONANP, National Comission of Protected Areas, called ‘Proyecto Domino’ (in the area whale sharks are called ‘dominoes’) has identified over 500 individuals of various sizes. All tour operators are required to have a license to operate and each boat captain is required to fill a sighting form for the day with information such as location, size, and markings. Since only one guide and two snorkelers can be in the water near one shark at a time, at first I thought that would be restricting, but soon I discovered it was far from it. Although the sharks are moving slowly you are moving much more so, even when you think your finning is rapidly burning up last night’s enchiladas de mole and pitcher of Tecate. No matter what the latest hi-tech style of fin you have it just can’t compare to the amount of water the caudal fin of these giants can move without the slightest strain. And so, remaining close to the shark took quite some effort. (Yet another great excuse to buy myself a dive-scooter…)

There were 10 people on the boat plus the captain and the guide. Both very experienced and knowledgeable about the sharks and the area. We got picked up in Playa del Carmen in a comfy van and were taken to Punta Sam, just north of Cancun and where the ferries are taken to go to Isla Mujeres. From there it took about an hour to get to a point between Isla Blanca and Isla Contoy. We were there around 8am and it didn’t take long before we spotted first a couple and then up to twelve whale sharks. Seemingly, plankton gathers at the surface in the morning and this makes for a nice whale shark breakfast. 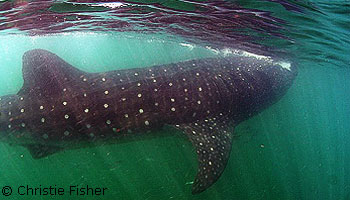 We spent around two and a half hours swimming with them, taking turns of 5 to 10 minutes per couple in the water. However, we all had more than our fill, leaving completely satiated with the experience. Around noon we were taken to a nice shallow reef, for some much more relaxing swimming and for some of the best, freshest and spiciest ceviche I’ve had, lemon juice-cooked right on the spot. I know there are many operators that offer this tour out of Cancun, Playa and Holbox. I decided to go with Kenneth Johnson’s Ecotravelmexico for their supposed commitment towards responsible tourism and concern for ecological awareness an I’m glad I wasn’t disappointed. Quite the contrary.

So, if you can relate to my now almost healed sense of pelagic inadequacy and you live anywhere in the Americas, make no mistake. The most indubitable way for you to enjoy a memorable aquatic moment with a whale shark is in the area between Holbox and Punta Blanca, right on the tip of the Yucatan peninsula, early in the mornings of the summer months. 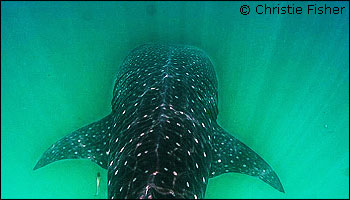