Overall, the Florida Keys play a big role and are directly responsible for 43,000 jobs across the state, and they generate a staggering US$4.4 billion to the economy of the Sunshine State.

“The sanctuary and its underwater wonders are what set the Keys apart and make them such a tremendous tourism destination. In light of the sanctuary’s impact on the whole state of Florida, the protection and restoration of its valuable resources is a major priority.”

A major part of the Keys’ contribution is to the tourism and recreation industry, with world-class diving, fishing, and other activities available.

“There is no doubt that sanctuary resources are among the top incentives attracting vacationers to the Florida Keys. The TDC not only understands and appreciates the sanctuary’s value, but actively promotes its protection. We want Keys visitors to connect with the sanctuary and also engage to protect it.”

The study was conducted by TBD Economics, LLC, and you can find the study here. 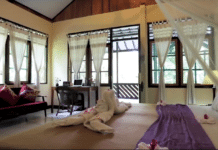