M/S Seattle – A wreck from the Fjords

The M/S Seattle, a cargo ship displacing nearly 8,000 tons and built in 1928 in Hamburg, met its watery fate on 8 April 1940 during world war two, after being ablaze in the Kristiansand fjords for 3 days. Sailing past the south of   Kristiansand looking for a safe haven to avoid severe fog the ship came under fire from the Germans, racing to find cover the ship headed for Kristiansand, only to come under fire from the Norwegian forces!
Following several hits from the Norwegian guns she caught fire and drifted unmanned and ablaze for three days, before finally hitting the side of the fjord with her stern. The impact caused her to break her back and start sinking rapidly into the cold waters, finally coming to rest on the sea bed in approximately 85 meters of water. On hitting the sloping seabed, the vesse’ls steel hull tore once again as she settled into her final resting-place. Fortunately, the Captain and crew were able to escape the ship in the lifeboats and so she went down with no loss of life. The ship was 145 meters long; nearly eighteen meters wide and had a draft of over eight meters.

Her accommodation comprised of cabins for twenty-four first class passengers, twenty-four second class passengers and crew quarters but her primary role Captained by Captain Hermann Lehmann was as a cargo ship ferrying supplies for the war effort. She was driven by a single screw, with 5400 horsepower engines and capable of 14 knots. At the time of her sinking, her holds were allegedly empty but rumors still abound that she was carrying some precious metals, possibly even gold in the forward holds. With a distance from the end of the shotline on the funnel to the seabed of nearly 40 meters this is a seriously impressive wreck and an incredible dive.

So here we were in the depths of Norwegian winter readying ourselves to dive one of the most notorious of Scandinavian technical dives. Preparing our kit was an experience in its self, preparing stage cylinders and regulators in the freezing conditions requires special care to prevent first and second stage freezing and the resulting unwanted freeflows. Here was where we had the biggest advantage as we were using our Inspiration rebreathers for the dive which have proven themselves on our other trips here to be fairly well impervious to the extreme cold. But the stage cylinders, needed in case of a bailout, still needed special attention. We were also to be very grateful of the warm breathing gas and the accelerated decompression the units provided us with! Loading our kit onto what appeared at the time to be a very small boat we readied ourselves for the 10 minute ride out into the fjord. Finally arriving at a small white buoy marking the site of the wreck.

Dropping over the side of the boat into the freezing -1C water we were greeted with Vaseline like visibility as the surface attempted to freeze, the only thing prevented it from doing so was the constant motion of the sea and the strong winter sun overhead. All of the sheltered areas of the Fjord had a thick coating of ice covering which looked very picturesque but felt bone chillingly cold! 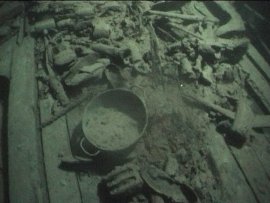 As we headed downwards only pausing at 6m to carry out a bubble check and a Diluent flush with our 10.5/50 Tri-Mix and using the line attached to the funnel at 42m for reference the ambient light started to fade. By the time we arrived at the wreck it was time for the torches with virtually all of the ambient light gone. Heading down the rear of the funnel, across the top of the bridge and arriving at the forward cargo hold which is just in front of the bridge at around 66m. The visibility here was still a very respectable 5-8mtrs. Wanting to get a good look at the inside of the wreck, I headed backward to the side of the bridge and tied a line to a railing at the entrance to the port companionway and headed along the companionway searching for an entrance into the lower bridge areas. Halfway along the companionway I found a suitable entrance point and entered what appeared to be the crew accommodation area. There were the remains of bunks collapsed along the walls and on the other side of the room, an exit led into the central staircase area leading upwards into, what I assumed was the bridge and down towards the engine room and holds. Not wanting to venture any further as I was running out of bottom time and line on my reel, I took one last look around and started to work my way back to the entrance point of the companionway carefully winding my line back in as I went. I arrived back at the companionway entrance and looked up to see the lights of my fellow divers above me at around 55 meters heading back towards the funnel and ultimately the shotline. The team all arrived back for the first stop at 42 meters at about the same time and so we started the long cold ascent to the surface.

Returning the next day, with the aim of investigating the lower cargo holds and perhaps hopes of coming across the secret cargo, we decided to drop down to the seabed and enter the hold through the huge rupture in the ship’s side. Heading over the side after tying a line off as the visability was starting to fade due to the thick layer of very fine silt, which had started lifting even with our careful finning. We headed past the cargo deck railings and down towards the sloping seabed at 72 meters where the huge hull, split open by the impact with the side of the fjord, gave us easy access to the lower hold area. This angle gave us a chance to view the sheer size of this enormous wreck. The seabed was littered with debris from the wreck, which included the winch gear and hold cranes that had presumably toppled off during the ships impact with the seabed. As we left the deck of the ship and headed down the side the visibility cleared and gave us a clear view of the wreck for about 8 meters in each direction.

The outside plates are badly corroded now as the lower grade steel used in its construction has not withstood the submerged years well. Looking along the side many of the portholes are still intact, complete with glass and covers, a wreck divers dream! Even at this depth the wreck is encrusted with soft corals and anemones that pull back into their stems as you approach. The area around the breach in the hull was very corroded and the slightest movement stirred up a huge cloud of rust. Looking up, rust was falling on us like the Norwegian snow we had endured for days! I was thankful at this point for the bubble free dive being provided by our Inspirations, the amount of silt that would have been displaced by open circuit equipment at this point would have been an interesting experience.

Looking around inside the hold did not reveal much, whatever had been in there was either long gone or well hidden under the thick layer of silt and rust. Heading back out into the open we started to make our way up the side of the wreck to join the rest of the group at the back of the bridge in 66 meters. It was rapidly approaching my time to head back to the line and start the long ascent to the surface. We were keeping our bottom times fairly short at around 20 or so minutes to try and minimize our decompression obligation which, even with the fact we were using our Inspiration rebreathers, was going to be uncomfortable. This was due to the extreme cold from surface winds and fresh water running onto the surface of the fjord causing the surface water temperature to be considerably colder than we found at depth. The long 6m stop was carried out in -1C and felt like a lifetime. It was here, I was grateful for the boys at O’Three for making me some Norwegian Specification mittens. The guys in standard 5mm five finger gloves complained the cold was excruciatingly painful on the hands and took them several hours to recover fully.

The M/S Seattle is a very interesting wreck dive with plenty to look at and would need many dives to be able to visit the whole wreck, but the most interesting parts around the bridge and the forward hold are fairly easy to access. Diving the Seattle takes a great deal of care due to the depth and the poor visibility that can arise with a few careless fin strokes. In the winter the visibility averages around 8-10 meters, sometimes rising to as good as 25 plus meters, but also gives the harshest diving conditions to contend with. Decompressing in these waters is not for the faint hearted or inexperienced diver!