Playing in The Band: Spears Other Than Britney

Spearguns seem to follow trends in the market tied to materials, aesthetics and ballistics. The educated freediver needs to discern the real differences among new products in order not to make a mistake in purchase. The basis on which he makes his choice needs to pertain to the preferences of the diver, the places where he dives, and the type of technique he uses while spearfishing. Before judging its necessary therefore to understand the characteristics of the product and to have enough experience to do it.

The growth in spearfishing and the different techniques divers now use to stalk their prey nowadays has created the need for lighter, more maneuverable, faster and more quiet weapons. So let’s look at all the different factors that influence a speargun.

The proper balance of a speargun is much more complicated than one would think. There needs to be a proper balance between the power of the bands, weight of the shaft, the sensitivity of the trigger, ease of swinging the gun, ease of use, and characteristics of actual design combining these elements.

The starting point to judge a band gun is its balance. Many divers make the mistake of unbalancing their guns by adding power to it without even having tried it, unknowingly this results in disadvantages instead of the benefits they seek. Overpowering a gun almost always causes a decrease in precision and an uncomfortable shot. Many divers who make these changes do so in the hope of shooting a big fish, but they will loose plenty of chances to land smaller fish as a result of poor accuracy. And this, without having any certainty of running across the big fish they sought. A capture of a nice fish is very much a reality with a standard weapon without having to have a cannon. Increasing the power of the bands, three negative effects are usually achieved: the first is usually a decrease in the sensitivity of the trigger mechanism, the second is a whiplash effect because of the increased power which acts negatively on the gun usually moving it somewhat, the third is dictated by the lack of balance between the forward pushing force of the bands and the weight of the shaft, the opposing force. Let’s analyze them better:

The sensitivity of the trigger mechanism is very important. When a trigger mechanism becomes too hard you risk shifting the entire spear gun trying to pull the trigger. If it’s very sensitive you have the advantage of only having to make a small traction with your finger to release the shaft. With a sensitive trigger the weapon stays pointed firmly at the target whereas with a hard trigger invariably it shifts if even slightly. That minimal movement in the tip of the speargun can change the aim as much as several inches on the final target depending on the distance. In fire arms, especially hand guns, the firing mechanism is fairly sensitive. In spearguns a compromise of a medium sensitive trigger mechanism is okay because the stability of the weapon in the water allows an efficient traction on the trigger for a precise shot. It can’t be too stiff however as it will cause it to lift and shift. The best rule of thumb therefore is that pulling the trigger shouldn’t have an effect on the movement of the gun.

The whiplash effect is practically the shift of the gun determined by the quick movement of the bands that push the shaft away from the speargun. This effect is normally only evident on multi-band spearguns. Band guns have various types of barrels and each has its own pluses and minuses. A round small section barrel has the advantage of being easily maneuverable in every direction and is very comfortable and easy to use. This quality adapts itself very well to medium size guns up to 100cm. This general size is fairly well rounded meeting the principal needs of precision and maneuverability for the prey it’s indicated for.

Other barrels have more massive shapes that are less maneuverable but more stable during the shooting phase and less influenced by whiplash. These types of barrels are intended for divers who don’t need as much maneuverability and quickness but would rather install more powerful bands. Obviously it would be useless to have a barrel of greater mass if the trigger mechanism became too hard or there were other negative factors. 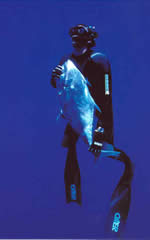 There are many types of bands and spear shafts with different strengths and thickness from different producers so it’s not safe to make exact judgement about the relationships between each of them. Generally as a rule of thumb however we know 6mm or ¼" shafts are ideal with a 16mm bands, and 6.5 or 7mm shafts are a good match for 18mm or 20mm bands. If we decide to use double bands, 6mm shafts should be avoided. As usually is the case there are differences of opinions on the subject but since logic is not an opinion, divers who get used to different variations from these general rules of thumb and swear by them are wasting the opportunity to make the best of the power and accuracy of their gun.

The gun’s 3 time Italian Champion member Marco Bardi uses most often are a light 75cm, 82cm and 90cm sizes with 6.3 and 6.5mm shafts. He also has a 115cm with a more massive barrel shape for trophy hunts with an additional 18mm loop band usually set up with a reel. Every gun therefore is set up for a specific use.

"When I change from a standard size gun like a 90cm which is light and has a very sensitive trigger to a 115cm with double bands I always try to remind myself while fishing that the gun has a different feel and acts a bit differently. I always try to keep in mind the friction of the 90cm I use more often when I’m hunting with the 115cm so I pull the trigger with the pressure the bigger gun requires."

There are lots of speargun designs sharing different concepts generally well accepted and some definitely not accepted. One is the concept of a shaft guide or rail along the barrel. Some firmly believe the shaft guide is necessary so long as the barrel doesn’t flex at all otherwise it becomes counterproductive. Another train of thought says a shaft guide or rail has no advantage since the shaft rests between the muzzle and the handle alignment. Basically, if there were any barrel flex (under heavy band load load) the shaft resting in between two points would have a tendency to shoot more accurately than a gun with a rail. The shaft in a rail takes the shape of the barrel if there is any minimal amount of flex. Additionally, the absence of any friction between spear shaft and rail makes the gun quiet, wasting less energy since the bands are parallel with the shaft.

Years back it was always thought that inaccuracy was a result of barrel flex and we were always seeking stronger and stiffer barrels. In reality the barrel flex wasn’t the cause of inaccuracy. What wasn’t apparent was that it was more due to the flex between the handle and barrel joint which creates a small angle that magnifies the error considerably during the shooting phase. On long guns this effect is much more noticeable as the long barrels under heavy load flex between the handle and barrel connection. This is a much greater concern to address in development and production than just barrel flex. The latest trends of more solid spearguns specifically address these concerns between handle and barrel joint connection.

Another argument in the accuracy subject that seems everyone agrees with is the proper alignment between shaft and bands. In a few words, the shaft and the bands should be as parallel to each other as possible.

Therefore the development of a new speargun must keep all these factors into consideration, the materials used, the reliability of the trigger mechanism, and the balance between the stock shaft and bands equipped on the gun. We should keep in mind however that not all spearguns are produced based on these premises with these prerequisites. Sometimes spearguns are designed for a less technical consumer of which price and simplicity as well as ease of use are more important. More experienced divers will justifiably seek a high tech product, whereas a beginner cannot appreciate the advantages which actually become disadvantages.

Other smaller factors to consider 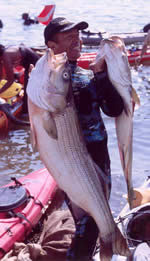 One consideration that should always be kept in mind is the aerodynamics of a spear shaft and its flight. It could be bent causing it to shoot off target, just as the barb could be too big or not aerodynamic for the shaft, as well as the possibility of the shooting line being too thick, factors that all could possibly lead to a bad shot. Even the type of steel used for the shaft plays an important role. A soft type of steel can be influenced by the power of the push of strong power bands. The pressure will cause the shaft to flex which should straighten it self as soon as it leaves the gun. A soft steel doesn’t have the right memory to return to its original shape fast enough. A more "springy" steel suffers less from this problem bending less from the traction of the rubbers springing back to its shape immediately. For these motives a harder grade spring steel is much preferable to a soft grade.

Most commonly a good all around shooting line is 300-400lb test, between 1.6-2mm which has the combination of great breaking strength as well as fairly low friction in the water following the trail of the shaft. Naturally the smaller the shooting line the less it influences the accuracy during the shot which is why anything over 400lb test on a band gun with a 7mm or thinner shaft is overkill.

In the general subject line there are lots of other details but there’s a risk of falling into the "maniac perfection category" since this is just fine tuning and small details.

Lastly, understanding the particulars of a speargun and its workings is important but we should never forget that the best thing is going diving as often as possible and there’s no substitute to learn how to shoot a fish. Figuring out one’s personal habits will just help determine what speargun is more ideal.

We have the scuba diver in your life covered this Christmas. Check out our Scuba gift list for this year.
Read more