Omer and Sporasub have long been known for high quality wetsuits and other diving gear. At this weekend’s Blue Wild Ocean Adventure Expo, we caught up with Omer’s Robert Bruins for a tour of the Sporasub Stealth, their new wetsuit made under a licensing agreement using HECS technology and material.

Bruins said that the HECS material creates a wearable “Faraday Cage.” Faraday Cages are what makes it possible for us to use microwave ovens. Those little grid patterns over the glass door actually create a Faraday Cage, which prevents the electromagnetic radiation from escaping the oven. Faraday Cages are also used to protect buildings and vehicles from EMP (electromagnetic pulse) blasts or sensitive cable television equipment on your local telephone pole from getting fried by storms and other interference.

At present, the Sporasub Stealth Wetsuit is available as a 2-piece, 5-millimeter farmer john with an attached hood and accompanying gloves and booties. However, Bruins sees their product line expanding in the near future. He explained that while empirical data is pretty widespread that the HECS concept and tech is truly effective, research is still underway to explain the science of how it works with regard to marine species.

We know that fish are able to navigate the ocean and others school so closely in unison that it’s uncanny. It is theorized that fish are able to sense the magnetic poles of the earth and navigate accordingly. It’s also theorized that a fish’s lateral line allows them to feel pressure waves, which would allow them to sense the movements of fish on either side of them as they school.

Bruins said that different fish and marine species will react differently depending on their particular sensitivities. HECS has been showing their lobster-interaction video for a while now. The video shows a diver with a standard glove approaching a lobster. The lobster immediately retreats as the diver approaches. However, when the lobsters are approached with a HECS glove, they don’t retreat. In fact, the diver is actually able to touch the lobster’s antennae numerous times. Species like white sea bass, which are more sound sensitive than sight sensitive, aren’t likely to benefit from the tech. Seeing a diver isn’t necessarily the trigger, but a fin brushing against kelp or a squeaky Val Salva movement can send them scattering.

In their own tests, Omer dived a California site known for big calico bass, which is a particularly visually-sensitive species. When they dived on the site with a standard camo wetsuit, the calicos bolted at first sight of the divers as most California divers will attest.

Thirty minutes later, on the same site, with the Sporasub Stealth suit with HECS material, they dived on the same fish. This time, the fish paused before just lumbering off into the distance. Clearly, they had seen the divers, but were not disturbed by them as they were during the HECS-less encounter. Those extra few seconds could mean the difference for a spearo or photographer to get a good shot. In both sports, seconds and even fractions of a second can mean the difference between success and failure.

Scott Eastman, CEO of HECS Stealthscreen, provided us with a bit more detail about HECS, the technology, and also their own line of wetsuits as well as concealment products for bowhunters and the military. They patented the tech in 2008, released an undergarment for bowhunters in 2009. About 18 months after producing their first wetsuit, they bought the plant and started manufacturing themselves.

The wearable Faraday Cage technology in HECS conceals heartbeat, subdermal movements, and other fields for up to 50 yards on land. Eastman said the peak and trough of the human electromagnetic field doesn’t change, even with activity. This obviously provides an advantage to wildlife photographers and hunters alike. Marine biologists state that they are now seeing behaviors they have never been able to observe previously; simply put, the fish don’t realize the biologists are there and therefore don’t change their behaviors accordingly.

HECS wetsuits are available in black, green camo, and ocean camo and in 3mm (US$599/551 Euros), 5mm ($699/644 Euros), and 7mm as a custom suit using 40 different measurements that are made in the plant in New Zealand. The suits utilize open cell Yamamoto Neoprene 39 and include boots, glovees, and a mesh bag.

In November, they plan to release a 1.5mm suit for more tropical markets as well as using the microfiber covered Yamamoto neoprene so that wetsuit lube is not required. Given the additional conductivity of salt water, the grid pattern or Faraday Cage has to be smaller that what is used on land. In their smooth skin wetsuits, the HECS fabric is sandwiched between two layers of material.

Both Eastman and Bruins were pleased to emphasize that the relationship between the two companies is cooperative more so than competitive. Eastman commented,

“Omer is a class outfit to team up with.”

Both see the HECS material as the evolution of wetsuits for underwater hunters, photographers, and marine biologists. Anything that brings us closer to animals without disturbing them is a common goal among all platforms of diving. 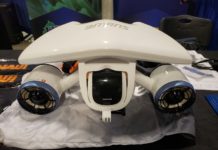 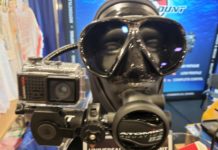 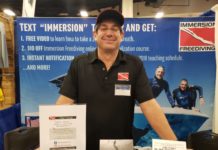