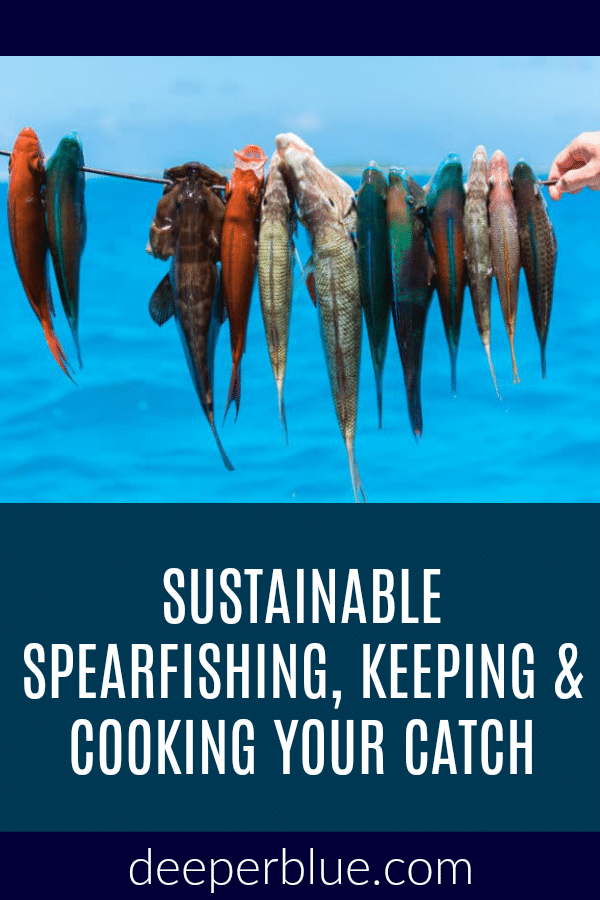 In the early 70’s, when I was a relatively new spearfisherman, I remember talking to the old-timers in St Petersburg, Florida about the early days when snook was legal to spearfish. They were the first to notice that snook was becoming scarce, and they spoke up at meetings with regulators about the problem. They said they were seeing snook that was dying from cold water in the bays and canals, and agreed that there should be a season and a limit on these awesome tasting fish. The old-timers were very upset when the regulators decided to outlaw spearfishermen from taking any snook, but no other fisherman. There were no spearfishing lobbyists like there were for hook & line fishermen, so more fish followed, like redfish and pompano.

Spearfishing has become the most sustainable fishing method for many reasons. One of the biggest is that it has the most selective catch, by species, size, and quantity. It also has the least problems for the environment, no by-catch, it doesn’t need any bait, almost no gear loss, virtually no non-targeted species impact, and no harm to the surrounding underwater environment. Nearly all spearos hunt in relatively shallow waters, scuba divers less than 200ft / 60m and freedivers less than 100ft / 30m. When using the right gear and taking only high percentage shots, there is a low non-retrieval rate. By following all fishing regulations and laws, and shooting only fish that are good to eat, and always eating your catch.

More spearfishing enthusiasts, than ever before, now have become ambassadors for the ocean, not by just following all the rules and regulations, but also raising their personal standards to higher levels than just the law. Every spearo I know had quit shooting 12-inch / 30.5cm hogfish long before the size limit was increased to 16-inch / 40.5cm.

In the long ago past some commercial spearfishermen shot everything that swam for-profit and gave the sport a black eye. Probably the most negative example that antagonists raise was the reduction in the population of the now called Goliath grouper in Florida and parts of the Caribbean. Although they were not illegal to spear in the US before 1990, they did need protection in the late 1980’s, even in the waters of their highest populations, like the Gulf of Mexico in Central and SW Florida. The actions of a small number of divers was a large part of the cause of disapproval of spearfishing as a commendable fishing method. I still see the photos online of a couple guys I knew who slaughtered them. What few people knew is that most divers stopped shooting them well before 1990. They were not great eating and nothing was sporting about shooting them, they were just hard to kill. On an unlucky fishing day, I shot a small one, in the early 1980’s and never shot another. I had to shoot it twice, and it bent my free-spear, then broke the tip on the line-spear too. I cooked the fish that was about one meter / 3.28 feet long and none of my friends or family liked it. Now 27 years later they are considering opening a small number of tags for Goliath grouper catches, because of the huge recovery of the species. They never disappeared, like people still say they did, as we would see one or two on lots of the wrecks in the Gulf. They would hide when they saw us. Now we often see 50 to 100 on Gulf wrecks, and these Goliaths charge us to steal our fish. They are back on the Florida SE coast too, but just 6 to a dozen or so on most wrecks.

It has taken several decades to bring the image of spearfishing back somewhere close to the level of pride it once held, so it’s in our hands to take control of our sport and always respect the beautiful creatures we have in our oceans, gulfs, and bays.

The winter of 2010 was my last season living in St Petersburg, and it had a dreadfully cold couple of weeks, which killed many fish. I saw many species wash up on the beaches and Intracoastal waterways, but most notably were the little Goliath groupers and big snook. I had bought a snook permit, for the first time ever, because they were off limits to my fishing method of choice. I loved the taste of snook, so I thought I’d go kayak hook & line fishing for one, but they closed the season because of the freeze. Just before moving to Naples, I went freediving in John’s Pass with my kayak and found some of the old JP Bridge rubble on the bottom. There was a baby snook with a big snarly ball of fishing line and a hook on his lip, tangled on a chunk of the old bridge rail. I thought he was dead, but then I saw one-gill move just once. I cut the line off the railing and brought up the little snook and the whole mess. I carefully cut away the mono and removed the hook, but when I let him go in knee deep water he rolled over and looked dead, but his gill moved one more time. I picked him up and walked him around in circles and his gills started to move a few more times, so I kept swimming him around again and again. He rolled over one more time, but his gills were pumping regular now, and after a few more circles he wiggled out of my hand and swam off across the little beach towards the new bridge. I looked up to the bridge rail when I heard clapping and half a dozen pole fishermen cheering. I never went pole fishing for a snook, my license ran out and I didn’t renew it. So, I guess I’ll always have a credit for 1 snook!

My early mentors taught me a few more things about fish than just how to spearfish. You had to gut them right away, within the next 15 to 20 minutes at the latest, or otherwise, it would taint the meat. So, after every dive, we got out a cutting board and a sharp knife and each of us would slit the fishes gut open from the bottom right up through the pelvic fins so you could reach in there easily. It’s interesting to see what your catch has been eating, and sometimes knowing this will help you find your next one on the reef. Most of the intestines will pull out by hand, as will the kidneys and so will the heart, but you’ll have to dig a bit for it. Cut off the stomach tube as low as possible and either toss it all overboard or save it for chum. After almost 20 years of always gutting our fish, I went on some fancy boats, and the owners said, “we don’t do any fish cutting until we’re back at the dock. It’s way too messy to do on the boat, so we just throw them in the ice box until we get home.” So, I did as I was told because I didn’t want to get the Berber carpet all bloody. My old buddies were right, it does make a difference, especially if you leave the fish for a long time un-gutted. The next time I ran into this was on a Dry Tortugas liveaboard boat, and they said the same thing, don’t get the deck all bloody, just throw them in the box. Three days later they got filleted, and for sure it’s not the same quality of meat. I guess it’s a clean freak thing or laziness but now I hear it all the time. By the way, many experienced chefs and one famous singer, Jimmy Buffet, only want to serve spear-caught fish in their new JWB restaurant at the Margaritaville resort in Hollywood, FL. Their studies show that hook and line-caught fish suffer lots of trauma a speared fish does not, and it makes it better tasting. Interesting, but it probably only works that way for good shooters who stone most of their fish, not the rookie who takes window shots and fights them for half an hour!

I built a long cutting board with rails that sit on my transom and won’t slip or slide, and it drains outside the boat. Afterward, it will require spraying down the deck with the salt water wash-down hose. There’s more to properly cooling fish than just dumping them in a box. Put a layer of ice down first so the fish won’t stick to the hotter bottom of a cooler on the deck, then stack only gutted fish in a layer, and then another ice layer, and repeat. Top it off with a good ice layer and close the box. Next, you want to cover your cooler with at least one quilted blanket, light color or white preferred, to insulate and keep the sun directly off the cooler. Yeah, I know your new super-duper $800, 50-quart cooler says it doesn’t need it, but trust me, it will be better, and the cooler will be a more comfortable seat as well.

Next, you must fillet your fish when you get home, but I’m not going to tell you how to do it. Go online and find a  filleting video of the fish you shot, or similar and watch it. Get a good sharp fillet knife and you’ll get it done.

One more thing I’m not going to talk about is cooking fish, because I’m the spearfisherman, not the chef, and I totally terrible at cooking!  We do have a great section on our forums that covers cooking and recipes for your catch.