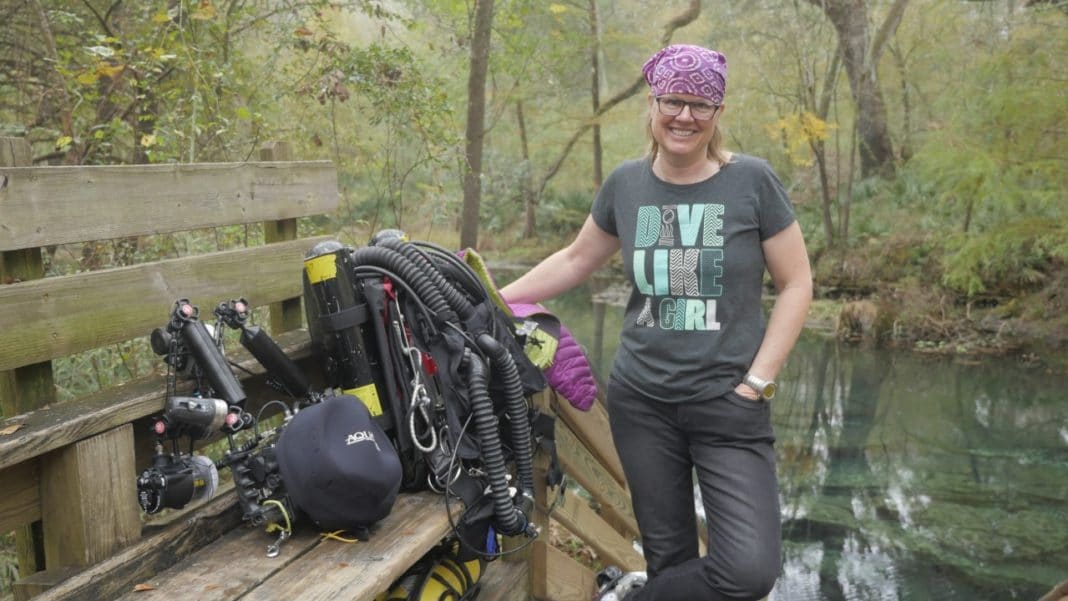 Jill Heinerth’s career has taken her all over the world, and often underneath it to places even angels fear to tread. Her office has is an ever-changing space that has been located in places no one has seen in hundreds of years, places no one’s ever been, and places that no longer exist. As an elite cave diver, she makes her living in a thrilling and often dangerous field, but she’s got one surprising tool in her kit that might just be the key to her success and survival: fear. Armed with that and a little help from her friends, she pushes the frontier of human experience and uses what she’s learned there to make the world a better place.

Jill wears many hats: diver, photographer/videographer, expedition leader, author, educator, consultant. She’s an inductee in the Women Divers Hall of Fame and holds the unique title of Royal Canadian Geographical Society’s Explorer in Residence. As a diver, she’s been submerged in the icy waters of Greenland for the production of a film called Under Thin Ice, tunneled beneath the Ural Mountains in Russia, and managed to get her gills wet in the arid expanses of the Sahara Desert. One of her most notable dives–and closest calls — was in a temporary cave formed in the belly of B-15, one of the world’s biggest icebergs. A cave that disappeared when the berg calved just minutes after she and her team emerged. She’s seen eyeless cave creatures that evolved in darkness, the remains of Mayan sacrifices consigned to the depths, and the bones of animals long extinct. Not to mention the fantastical live animals she’s joined in the water, like polar bears and walruses, narwhals and beluga whales.

Preferring dives with a mission, she’s been a leader diver for projects that required incredible skill and planning and helped to shift the perception of cave divers from devil-may-care adrenaline junkies to highly-specialized professionals who can make important contributions science and our understanding of the planet on which we live. She’s conducted 22-hour missions to help make the first 3-D maps of subterranean space…which just happened to be submarine as well. Her work has included practical studies of the drinking water conduits that wend their way under our feet, and strange subjects like the sex lives of bivalves in the Ottowa River. In 1997 she joined a team working with National Geographic to map the cave system of Wakulla Springs, Florida. A version of the innovative 3-D mapping system developed for that project has been commissioned by NASA and is being modified to explore the oceans of Europa, one of Jupiter’s moons.

When the Royal Canadian Geographical Society invited Jill to be their first-ever Explorer in Residence, they asked her what she wanted to do with the position. Her choice was to talk to young people about science, exploration, and what kinds of careers could help them achieve their dreams. This ranged from giving a talk to kids interested in journalism, to programs geared towards enticing more girls into STEM fields. She also uses her experiences to inspire and educate adults about climate change, water literacy, and the frontiers that still exist in our much-explored world. In addition to Under Thin Ice, she’s worked on several other films and television programs as a videographer, a subject, a director, and even as a consultant on a James Cameron movie. She has her own IMDB page!

The author of multiple books, she addresses everything from the technical aspects of cave diving and underwater photography to what it’s like to be a woman in the dive industry. Her newest title, Into The Planet, is a memoir of her life aimed at audiences beyond the niche dive community. During the seven-week media tour for its release, she talks at length about the unique tool that has accompanied her on every adventure and brought her safely home, her fear.

Though she thrives on exploration and discovery and loves to be the first human to lay eyes on somewhere new, Jill is quick to correct the impression that she’s fearless. Acknowledging that it’s a vulnerable topic for most, she insists that fear is a vital part of both pushing boundaries and living to tell about it. Despite her first clear memory being the time she nearly drowned, Jill has always wanted to be in the water. But even now, after over 7,500 dives, she’s still a bit scared before every splash, and she wants to dive with others who feel the same way. It shows that they understand the risk and care about the outcome — caution makes it safer for everyone.

While she believes that you have to be willing to step towards that fear in order to do epic things, Jill is adamant about the importance of preparation and safety. Cave diving has claimed the lives of over a hundred of her friends, and she believes that she is alive today because of her strict adherence to safety protocols. Critical thinking is crucial. She evaluates whether a certain objective may be safer to do alone (she’s a trained solo diver so don’t try this at home). She plans each dive meticulously in order to head off poor decisions before she even hits the water, checking off every step on the rebreather preparation list she keeps on paper, not just in her head. And she never ever gets upset when someone decides to call a dive.

This attitude of unwillingness to compromise on safety is one she’d like to see made standard across the dive industry. As a young diver, Jill learned that she had to be able to stand up for herself and speak up if something didn’t feel right. Now that she’s more often the veteran or leader of a dive, she hopes that even the least experienced of her companions will feel empowered to point out anything she’s missed. Pride has no place when you’re cultivating a culture of safety.

But fear is a tool that needs to be honed. In the face of an emergency, she’s had to shut off her emotions, to silence that fear in order to survive. Her philosophy is that we need to have progressive experiences to help us learn to deal with that fear so that when disaster strikes, we have the ability to calm ourselves down and make the rational decisions that will bring us back to the surface unharmed. Her advice for when you find yourself in a scary situation is to stop, think, breathe, and then act. The key is to use fear to your advantage, but not let it take over.

Jill’s amazing exploits attracted the attention of Ryan Crawford (Suunto’s UK Business Manager), who invited her to be a Dive Ambassador for the company. She’d been using their gear ever since she was given a Suunto dive watch for the Wakulla project, and laughingly recalls seeing National Geographic footage of herself with a big Suunto Spyder on her wrist. Becoming an Ambassador gave her the opportunity to be part of the development process of new instruments and algorithms, helping out with the testing and refinement of new products often disguised in the outer trappings of models that have already been released. The Core and the Eon — with her penchant for diving in extreme conditions, Jill is in a unique position to really put these products through their paces, and offer feedback on performance and wish-lists for features and functions that might improve them. She even uses an S9 for terrestrial cycling!

Obviously, being a brand ambassador entails using Suunto products and believing in them, which Jill certainly does… if her description of receiving new gear is anything to go by. She describes the feeling of potential when she opens the box — not seeing a dive instrument, but all the adventures she’s going to have with it, knowing it’s the end product of a process that focuses on excellence and exceptional quality. After all, if an instrument is going to support her in her exploration of shifting icebergs and deep underwater caves and earn a place in her toolkit alongside the fear, curiosity, and preparation, there can be no compromises.

After the Wakulla project, Jill realized that she had crossed over from private, anonymous diver, to a person with the power to influence others and make a change. Since then, she’s worked to inspire others to explore and empower them to dream big. Her words of wisdom to new divers, or really anyone pursuing impossible dreams: Nothing should stop you, there are no limits. So take her advice — get out there and go for it!

Erin Durbin-Shererhttps://www.deeperblue.com
Erin began diving in 2012 as preparation for a trip to Hawaii and before the year was out she'd left her old life behind to work in the dive industry full-time. When she's not out exploring the deep and collecting c-cards, you might find her making art or working on her master's thesis in cultural anthropology at San Diego State University. Erin is an Associate Editor with DeeperBlue.com.