A national polemic arisesas the executives of the Palm Atlantis (Dubai),have announced that they will not release the whale shark that they capturedfrom the waters of the UAE almost a month ago.

Atlantis announced thecapture of the juvenile whale shark recently which was found in shallow waters,“fatigued and disorientated”. Whale Sharks are protected by CITES(Convention for the International Trade of Endangered Species) and apparentlythe hotel was urged to release the animal. Environmentalists have hit out at the management ofAtlantis hotel for performing an apparent change of mind by deciding to keep awhale shark caught off Jebel Ali.

OnSeptember 9, the luxury resort issued a press release to say its marine expertshad rescued a struggling four-metre whale shark. The statement went on to say that the femaleanimal had been taken to the hotel’s 11-million-litre lagoon “for medical careand observation” – with no mention of a permanent capture.

Althoughit was initially reported that the shark would only be kept until it had recovered froman unspecified medical problem, Mr Leibman said there were no plans to releaseit. In an article published in the National newspaper on October 4th, he says “I’mnot sure where that statement came from,” he said.

He has also told 7 days “We have probably the mosttalented marine science people in the industry monitoring it and making sure itis well.”

Ibrahim Al-Zu’bi, environmentaladvisor for Emirates Diving Association, says he has seen the whale shark andbelieves it should be put back into the Arabian Gulf. “It should be tagged and released, thesooner the better,” he told 7DAYS. “Iknow Atlantis is under pressure at the moment because they have only justopened, but we’ve been told they would release the whale shark. “They are using it for educational awareness.But they will have to release it because it can grow up to more than ten metres- it’s common sense.” Al-Zu’bi also madereference to the whale shark deaths in the aquarium in Atlanta, Georgia.

In thearticle released by 7 Days today, written by Paul McLennan, various public comments say that one visitorto Atlantis said: “I think it’s disgusting that they are using this poorcreature as a tourist attraction. “It should be released back into the wildwhere it belongs and as soon as possible.” And AliHood, director of conservation at UK-based Shark Trust, added: “We certainlywould not support any venture that would use a whale shark merely as afinancial attraction.”

Despitecalls to Atlantis for an explanation into the future of the whale shark, thehotel was unavailable for comment. Whale sharks are listed as a vulnerable species by The WorldConservation Union and are protected by CITES (Convention for the InternationalTrade of Endangered Species), which is an agreement of which the UAE is a signatory.

UAEresidents are calling out for the shark’s immediate release. 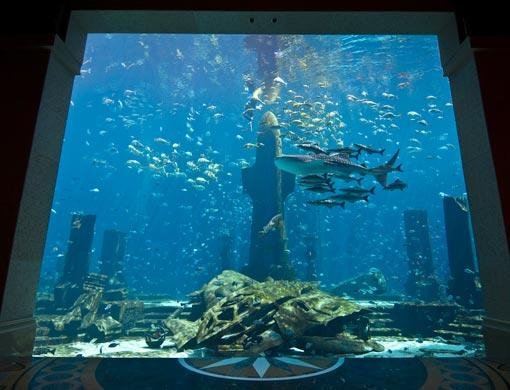 Rare Diving Helmets And More To Go Under The Hammer

The latest dates for citizen science expeditions to Socorro island and the Sea of Cortez aboard the liveaboard Quino el Guardian have been announced.
Read more

Breath Easy with This Paper Towel Swap. The IMPERFECT Conservationist