It has been a while, 8 years to be exact, since I had been to Sharm el Sheikh, the diving mecca at the tip of the Sinai Peninsula.  After all that time I was itching to see some of my favourite dive sites up close, so when my phone rang and my buddy Mark Evans asked if I was free for a trip to Sharm I jumped at the chance.

The Camel Dive Club, based in Na’ama Bay – the central hub of Sharm, was our host for the few days. Camel is celebrating their 20th anniversary in 2006, and 20 years ago Sharm el Sheikh was a very different place.

Camel was set by Hesham Gabr, a student in Cairo who was getting bored of city life and his current degree.  After sampling diving around Marsa Alam in 1977 he was determined to setup a diving company and after a friend suggested the Sinai history was set for the Camel Dive Club to be setup.  He swapped his degree to anthropology and spent most of his month by the sea building his skills and base for what was to become the best dive centres in Sharm 20 years later.

Na’ama Bay in 1986 was a desolate place.  Only a few buildings and tents were spread around the bay and diving in Sharm was definitely classed as “adventurous”.

In the 20 years since the first building and tents were put in place Camel has grown to include a PADI 5 Star Instructor Development Centre, a TDI technical diving facility, 4-Star Hotel, swimming pool, Tandoori and Italian restaurants, a clothing store and the legendary Camel Bar and Roof Bar.

So the scene was set for a spectacular few days in a resort that attracts divers and tourists alike.

My memory of diving in the Sinai was one of beautiful soft corals, reef fish, wrecks and the occasional larger fish such as wrasse, barracuda or even a shark.  I was glad to not be disappointed.

We were going to be doing diving in February which meant colder water temperature (22 Celsius / 72 Fahrenheit) and stronger winds; however I dived in my Scubapro S-Tek 7mm Steamer and felt lovely and toasty diving up to an hour, three times a day. 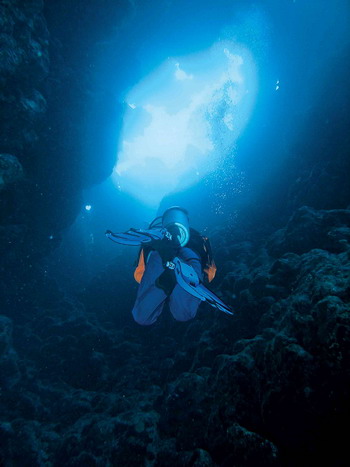 We alternated between the two major diving areas – Ras Mohammed Marine Park and the Straits of Tiran.  Ras Mohammed is a national park and is at the very tip of the Sinai.  Some of the most spectacular dives can be had off Ras Mohammed and is a must for more experienced divers.  You have to pay a fee to get into the park but the dive centre will take care of that for you.  We did many dives off Ras Mohammed but Shark and Yolanda Reefs really made the trip.  The sheer wall off Shark means diving into what feels like an abyss, with your excitement building as you dive the wall covered in huge tube sponges and seafans, whilst watching schools of giant barracuda and jacks keeping an eye on the action on the reef.  Further round onto Yolanda you can take a look at what is left of the Yolanda wreck (most of which is now at below 100m) although the washbasins and bath tubs provide more than enough interest for wildlife and divers alike. 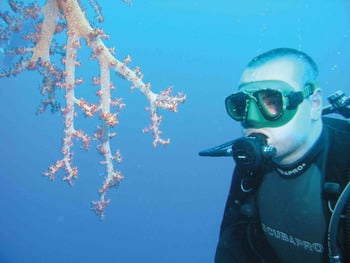 Our other destination was the Straits of Tiran.  Comprising of four main reefs, all named after British cartographers – Thomson, Jackson, Woodhouse and Gordon Reefs.  The reeds are located at the end of the Gulf of Aqaba between the mainland and the military island of Tiran.  The reefs are much more exposed so strong winds can make a journey there choppy but again the dives are well worth it with extraordinary diversity of corals and with the amount of water flowing through the reefs can mean much larger fish to see. 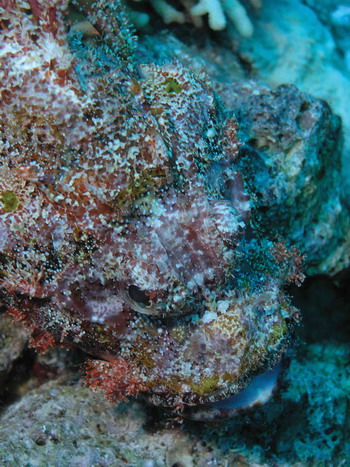 Day boat diving is one of the pleasures of Sharm.  Rather than getting kitted up and fighting your way through hordes of tourists on the beach, or trying to fight off sea-sickness on the liveaboard – day boat diving offers the best of both worlds – and Camel have some of the best boats around.  Our boat was very well equipped with plenty of space for all our kit as well as plenty of space for the non-divers in the group to lounge around in the sun whilst their loved ones are off under the waves.  A low entry platform and stairs that allow for you to clamber aboard with your fins still on make getting in and out of the water a joy. 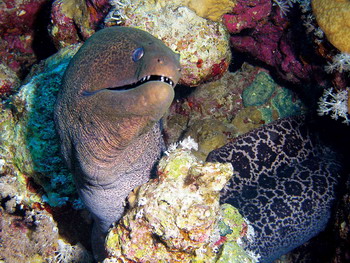 The thing that impressed me the most though was the kitchen on-board.  My memories of previous boats were of a kitchen that was probably best not seen.  However this boat has a stainless steel kitchen that you could see your reflection in.   Food was prepared quickly and was extremely tasty – even on days when some of the guests were looking decidedly green (not everyone grows sea legs, even on calm days!).

The dive guides were all very professional, giving excellent dive briefings before each dive, keep an eye on the group underwater and are always ready to help. Some do have to put up with a lot though, Pete Spiller our dive guide, did have to put up with Mark and myself for a nearly a whole week but never grumbled once!

Finally the ubiquitous “video guy” was on board, ready to film and sell the experience and memories of being underwater.  It’s all very high-tech now with footage downloaded and put to music within minutes of coming top-side.

Overall the diving in Sharm is one not to be missed.  For divers all over Europe it is very easy to get to and prices are extremely competitive. 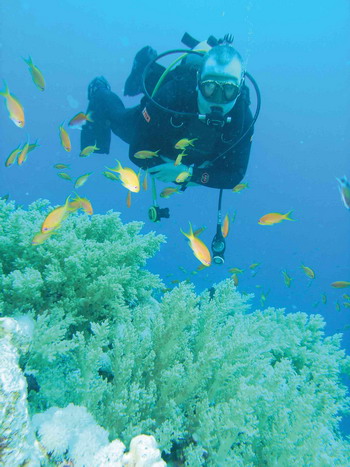 Visas: Required for all visitors.  Available at the airport.

Language: Arabic is the primary language but English, French, Italian and German are also spoken