So you’re an avid diver looking for a dive vacation that you can pass off to your significant other as a ‘family trip’. Where do you go?

About an hour’s flight due East from Miami is an arched island named Eleuthera, which is Greek for ‘freedom’. Rarely more than a mile or so wide, the island stretches 110 miles along the Great Bahamas Bank. With over 350 beaches, beachgoers often find themselves with their own personal paradise without a soul in sight. The island also features coves, cliffs, farmland, and is peppered with small villages and towns. Add to that the fact that Eleuthera also separates the deep blue Atlantic Ocean and the shallow aquamarine the Bight of Eleuthera and you have a vacation planned in heaven.

Thanks to Bahamas Out-Island Adventures, we were able to see just how stark the contrasts were between these two bodies of water. At Glass Window Bridge, you realize that the only thing separating the two is a narrow strip of limestone less than 100 yards wide. Neil and Rachael have a broad base of expertise and specialize in overnight camping trips, eco-tours, snorkeling, and even surfing adventures. Yes, surf’s up in Eleuthera! So, whether you’re looking to hang ten or take the family on an adventure trip they’re not soon to forget, Eleuthera has something to offer everyone and is well worth your precious vacation time.

In addition to diving, there is cave exploring, kayaking, hiking, camping, beachcombing, turtle watching, birding, and of course, relaxing. We’ll get to diving in a few paragraphs – we’re trying to sell your non-diving counterparts, remember? 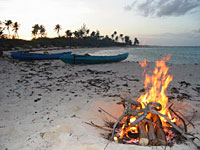 We arrived at North Eleuthera Airport (ELH) on a USAir flight out of Miami (MIA) after a very brief and uneventful plane ride. The other ‘major airport’ is in the middle of the island at Governor’s Habour (GBH). There are plenty of charter flights out of Miami, Fort Lauderdale, and Nassau as well. The North Eleuthera airport is little more than a landing strip with a few concrete block buildings, which certainly suffice in the Bahamas as an airline terminal. As you exit onto the tarmac and into the building, you collect your bags and introduce yourself to Customs. After just a few minutes showing your passport (and possibly your travel Visa, depending on your citizenship), you are quickly greeted by an eager gentleman asking if you need a taxi. If so, he will grab your bags and walk you less than twenty feet through the front doors to a half-dozen taxis. As he loads your bags into the cab, he’ll remind you that he’s ‘your porter’ and will expect a tip. Taxis are the primary mode of transportation and can get you basically anywhere you want to go for around $4US per person.

Keep in mind, while most of the residents of Eleuthera and Harbour Island are naturally very friendly, many make their livings by simply helping tourists to find their way or by carrying their bags. Gratuities are not only courteous, they’re expected. Gratuities are often added to restaurant bills automatically, so check your receipt before adding another tip. Also, Bahamian currency and US Dollars are interchangeable on the islands, so expect to receive change in both Bahamian and US currencies. As is the case with much of the Caribbean, don’t expect the natives to live in opulence. Housing is modest for most except select wealthy families and foreign investors. Food and water are also a bit more expensive, but we found the food quality to very good no matter where we ate on the island – including the one-room restaurants that double at night as people’s homes. 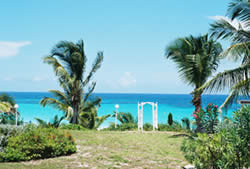 For this trip, we were headed to nearby Harbour Island, immediately to the East. After just a $4 taxi ride to the dock and another $4 water taxi ride from Eleuthera, we arrived at Government Dock where we greeted by more helpful porters and taxis. Just another $4 taxi ride and we were at the front desk of our first hotel, The Coral Sands Hotel located on a sloping hill overlooking the Atlantic Ocean. From our oceanview room, we had a picturesque vista of the ocean, the local flora and fauna, and the beach bar. Perhaps one of the best lodging values on the island, Coral Sands is in the process of changing hands and being renovated. Our host, Wim Steenbakkers, assured me that the new owners from Miami were going to make guests feel even more at home than they do already. I had an opportunity to meet the them and have no doubt that Wim is correct. In addition to the hotel’s signature drink, the ‘Coral Sandy’ their bartenders can make you whatever concoction you desire. While you’re there, make sure you meet Red, the bartender at the resort’s Poseidon Restaurant for about 27 years. Red is easy to spot as he wears red every day of the year except Valentine’s Day, when he wears black because everyone else is wearing ‘his color.’

Within snorkeling distance of the gorgeous private beach is a barrier reef. Plus, nearby amenities include horseback riding, snorkeling, kayaking, and sailing. The food is excellent and the stargazing from the bench swing was a delight. Bicycles and golf carts are easy to rent and are a great alternative to taxis. Reggie (Taxi #24) was our own personal driver during the trip and was a great help – especially when reminding us that you have to pay your $15 departure tax in cash. If you need to know anything about the island, he’s a good guy to ask.

Next Week – Branon looks at the diving side of the vacation

Branon Edwards
Branon Edwards is a PADI Certified Divemaster who has been scuba diving in South Florida for over three decades. He is a real estate broker and freelance writer who lives on a sailboat in Fort Lauderdale.