Meet the Giant Manta Rays of the Mexican Caribbean Sea

We all scream in unison as a giant manta ray rockets out of the sea splashing on its back. A double-breach incites more excitement as a second aerial flip lands it on its belly.

It’s unknown why they breach, there is still much to learn, but the sighting is what we are after for our research. Being in their presence fills our sense of wonder. Underwater the giant, elegant creatures glide by with seemingly little effort, their curiosity places a hold on you equal to your curiosity about them. Swimming with a manta ray is an experience that most everyone will define as unforgettable.

I spent a month with the Manta Caribbean Project (MCP) in Isla Mujeres, Mexico where they carry out research on the Giant Manta Ray (Mobula birostris) currently listed as Vulnerable by the IUCN. It has been suggested by scientists that the mantas in the Mexican Caribbean could be a third species, the Caribbean Manta Ray (Mobula cf. birostris), though it is yet to be scientifically proven.

Karen Fuentes started MCP in 2013 to define the local manta ray species and habitat in the Caribbean Sea. Gathering scientific information allows them to understand the population so they can develop programs to raise awareness, provide education to the local communities and government, and develop legislation for sustainable conservation. Karen is passionate and she is a leader, and the mantas, her “babies” she calls them, are lucky to have her.

Over the course of the month, we did eight field trips in Marine Protected Areas hugging the Yucatan Peninsula. The currents here deliver nutrient-rich waters welcoming high biodiversity of marine life. Huge plankton blooms attract many species including these rays, which we set out to find. Leaving very early, which was ideal since the heat and humidity were sweat-provoking nuisances by 9 am, and because the research permit had a strict curfew of 2 pm, we piled our field and snorkel gear along with PB&J sandwiches into taxis to make our way to the sea. It’s quite an amusing feat securing the 1.5-meter aluminum “Manta Trawl” in the trunk. Once at the meet point, we’d wade out to the boat whose crew is devoted to our cause. This region is well-known for the whale shark aggregations, and the local community is clearly informed and dedicated to conservation efforts.

The initial goal with the manta research is, well obviously to find them, but then to take identification photos to record each individual’s life history, to track it over time. Trying to keep pace with a manta could be its own sport as we dive down aiming to capture a ventral profile. The unique pattern of markings on their belly and gills are individually specific identifiers, like our fingerprints. MCP has identified 491 individuals in their rapidly growing database. Having ID’s of the sightings and re-sightings provides valuable insight to the population by revealing who is coming, going, changes in growth, gender, new appearances, etc., all delivering vital information about the species and how they interact with their environment. A couple of field trips resulted in no sightings, which is important to the research as well.

One of the challenges is that the study area is huge as they are currently operating in four different NPAs (Whale Shark Biosphere Reserve, Mexican Caribbean Biosphere Reserve, Contoy Island National Park, Flora and Fauna Natural Protected Area Yum Balam) and it can be difficult, almost pure luck, to locate the pelagic species over this stretch of sea. MCP started doing aerial monitoring with a Swellpro Drone, thanks to The Rufford Foundation through a grant application, and more recently, they have been conducting aerial surveys by plane to cover an even larger expanse in conjunction with The Manta Trust.

Giant manta rays are captivating, graceful, and, as their name suggests, big. However, they are extremely vulnerable. Harmless plankton feeders, they have tiny teeth (used mainly by males to latch on to female’s pectoral fin for reproduction) and no stinging barbs — a common misconception. No, they are not the cause of Steve Irwin’s untimely passing.

Their reproductive rate is low due to biological factors such as high age of sexual maturity (10-15 years), long gestation period (1 year), and low fecundity (1 pup) which dictate a slow population growth.

In addition, there is a variety of imposing threats including bycatch (caught in nets meant for other species), targeted fisheries (mainly for their gill plates for Chinese medicine which has no scientific evidence to prove said medicine actually heals), and marine debris (plastics, ghost gear, trash, etc.).

MCP has been researching microplastics (particles less than 5mm in diameter) in the local habitat in collaboration with 5 Gyres since 2017. A “Manta Trawl” towed by the boat captures debris floating on the water’s surface by filtering samples through a fine-mesh net; similar to how mantas feed at the surface. 5 Gyres estimate that there are over 5.25 trillion particles on the ocean’s surface. As mantas feed on plankton, smaller than a grain of rice, they also inadvertently ingest these microplastics.

In addition to possible physical injury and starvation by plastic debris, there is growing concern about the exposure to toxins when ingested. Plastic in the ocean can absorb pollutants. The longer it is exposed in the marine environment, the more pollutants it can accumulate thus increasing its levels of toxicity. Mantas filter thousands of cubic meters of water daily making them susceptible to plastic debris ingestion and associated pollutants. Seawater properties are an important aspect to study with regard to environmental concentrations of plastics, the intensity of toxins, and health effects.

The data collected helps provide a comprehensive look at the manta ray biology, ecology, ocean dynamics, and habitat use. It becomes a valuable tool to educate the community, advance policy, and inform parties about the conservation measures and management initiatives necessary to successfully protect manta rays.

Karen emphasizes the importance of involving the local community and giving them a voice. “Getting fisherman, tour operators, locals, and kids onboard can really make a transcendental impact on tourism by THEM. You have your community as the guardians of the mantas, the ecosystems, the oceans.”

Even while communities are encouraged, the implementation of national protection is required to enforce regulations and further initiatives. Since the end of 2019, all species of mobulid rays are fully protected in Mexico under the Official Mexican Standard (NOM) NOM-059-SEMARNAT-2010, but there is still much work to do.

“Manta tourism is an important way to conserve manta rays. They face a lot of threats worldwide starting from targeted fisheries but also as bycatch. We need to create the framework, we have to create the tools and provide the information that will allow us to carry out more responsible tourism in the region. You have to account for many things and use different tools in order to make it rich and use tourism as it needs to be used.”

That doesn’t mean you won’t encounter a manta while snorkeling with whale sharks or diving in the area. So in the meantime, the Manta Trust has a Best Practice Code of Conduct, derived from years of research, that outlines how to respectfully and sustainably interact with rays.

Many ecosystems are critically linked, working together, and directly affect one another, so naturally, MCP has teamed up with local organizations in neighboring ecosystems.

Linking with Acción Isla, a movement that carries out the regular beach, mangrove, and reef clean-ups, we spent two Saturdays cleaning up 80 kilos then 155 kilos of debris in the mangroves. Both successful mornings, but it feels more fitting to say how unfortunate that this had to be done in the first place. Mangroves play a major role as a nursery for many reef organisms, maintain water quality, protect shorelines from natural disasters, store carbon making them a viable solution towards climate breakdown, ok, I’ll pause. We get the point – they are important! When littered with plastic bags, bottles, cans, (I could go on for a page with what we uncovered on the surface), it’s sad to see that an area nature intended to protect and filter is overrun with disintegrating and harmful trash; trash that will end up in the oceans and inevitably be ingested by animals.

La Tortugranja (turtle farm), dedicated to preserving endangered sea turtles (there are 4 of the 7 known species in this area), works to safeguard breeding grounds and turtle eggs. As the enormously pregnant turtles laboriously make their way ashore to lay their eggs, volunteers carefully gather the eggs to be guarded at the farm away from predators, including human poachers, until they are ready to be hatched and released into the sea.

How Can You Take Action?

I enjoyed my time with MCP helping and learning about the species, organization, and work being done. There are a lot of moving parts with any conservation effort and non-profit organization, and volunteers and donations can be that extra push to keep the project moving forward. Here are some ways to get involved:

The Manta Caribbean Project is a registered Non-Profit Organization in Mexico that operates in NPAs under research permits issued by CONANP. 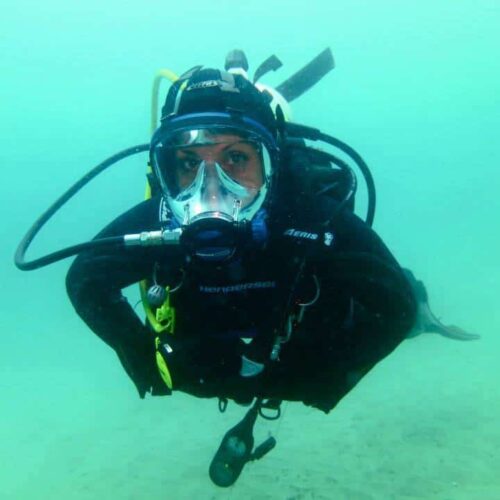 Nola Schoder
Nola discovered her love for breathing underwater in San Diego, CA where she is a regular diver. An underwater photographer, she is rarely diving without her camera as though it has morphed to her being. Being an avid traveler, scuba diving has multiplied her bucket list by infinity so when she’s not looking for a macro critter hidden on the reef, you can be sure she is plotting her next dive adventure.

Oceana’s Gala Raises Over $1.6 Million To Conserve The Oceans