Sunday, August 21st was a sweltering day in north Miami, Florida — but that did not dissuade over a dozen determined freedivers from a common goal of showcasing their best dynamic performances at the second installment of the South Florida Apnea Challenge. Day two of the weekend pool competition, (hosted & expertly organized by Ricardo Paris of Vortex Freediving), proved to be not only hot but wholly unexpected in terms of of the leader-board. On the first day of the competition a tug-of-war for first place had started among the men, between Leo Lupoli of Venezuela, who garnered the largest pile of points for a whopping six minute and :40 second static apnea (STA), and American newcomer Caleb Upton, who delivered a personal best DNF dive of 137 meters.

On the women’s side Claire Paris looked ready to dominate in the field of women as she registered a personal best STA and solid DNF dive, with hopes for a national record attempt DYN dive the following day. Sadly, for the entire Paris family, the unfortunate passing of a much beloved grandfather took their hearts & energy elsewhere, so freediving would have to wait. Then after a steady 192 meter dynamic (DYN) Lupoli did not have enough gas in his tank to hold his airway up, let alone execute a surface protocol, while Upton’s own swim was much abbreviated due to a bad back, earning both men a showing of red cards and a complete drop off the leader-board. But it’s freediving folks, so that means you never know what’s going to happen next… Ultimately super-speedy fin swimmer Diego Rodriguez of Colombia and Serbian champ Lena Jovanovic Balta triumphed with clean dynamic dives of 189m and 118m respectively, propelling them both to first place finishes.

To pay respect to the Paris family, all of the athletes and volunteers dedicated their final day to the elder Ricardo Paris of Caracas, Venezuela, as they shared a moment of unified silence + remembrance.

Thanks to generous sponsors such as Grove Scuba, Waterlust, Drift Freediving, Alchemy Fins, Deep Apnea Fins, East Coast Divers, and Prawno all of the athletes received prizes.
See the complete roster of all performances & the standings here below: 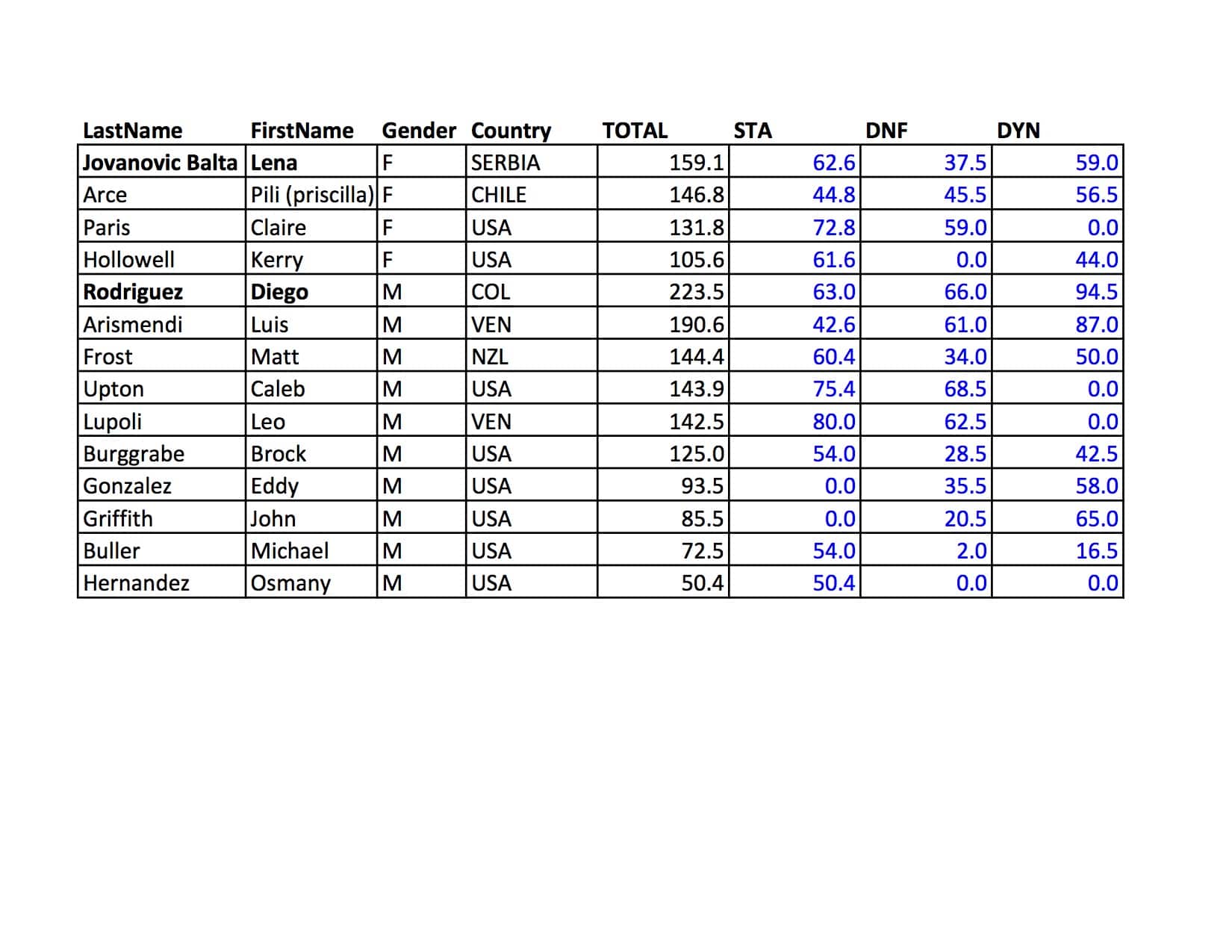