Belize's Blue Hole – What's all the fuss about?

We all crave to be special. If we were a city or a country, it´d be no different. A doctorate in dwarf albino nudibranchs’ reproductive systems, a grand canyon, a Calatrava-built bridge, an Eiffel tower, tall, dark and handsome…whether we are human or geographical location, we crave something that will set us apart from the rest and make us special, or better yet, irresistible in the eyes of the beholder. Cozumel has its currents, Truk has its wrecks, Galapagos has everything except warm water, Belize has its Blue Hole.

Belize is already fortunate enough to have running along its shores the second largest reef system in the world, and if the gorgeous blue hues of its waters or the picture perfect single coco- tree Lilliputian islands sprinkled all over its domain weren’t enough to make Belize feel sufficiently special and pretty, it has The Blue Hole to draw attention to it. Kinda like Cindy Crawford’s distinguished, memorable and highly differentiating mole.

If you’ve been around the sport or even sport practitioners, chances are you’ve heard about the Blue Hole. Its fame is such, it has practically become homologous with diving in Belize. "Hey, you’re back! How was the diving in BelizedidyoudivetheBlueHole?" And if you’ve been around the sport or around Belize much you could probably expect one of two kinds of coloring to tint the response to such a question: passion or contempt.

Just as beauty is in the eye of the beholder, Belize’s Blue Hole’s magic is in the masked eyes of the diver who explores it. So, is it worth it? Is it cool? What’s the fuzz all about? You be the judge. 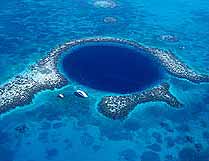 The Blue Hole is actually not that unique to Belize. Just as other supermodels or even girls next door might have an attractive mole, other countries have their own blue holes. Even Belize has more than one, but the one we constantly hear about, the Big Blue Hole, is unique because of its size and depth. But more on that later. First a bit of geological history.

The Blue Hole is a geological oddity, so much so that in March of 1996 it was declared a World Heritage Site and later declared a National Monument in February of 1999. The Hole used to be, once upon a time millions of years ago, a complex system of dry caves. Scientists believe there were a couple of peculiar events that made the Hole what it is today. First, an earthquake of such force it might have tilted Lighthouse Reef, the area where the Blue Hole is located, to an angle of 12 degrees. Secondly, the melting of the last Ice Age flooded the cave system. Eventually, the porous limestone ceilings of the caves became incapable of supporting their own weight and they crumbled, leaving an almost perfectly round and deep hole in the process.

The Blue Hole is almost 1000 feet in diameter and over 450 feet deep. Its walls are almost perfectly vertical and fairly smooth, except at a few points where there are large ledges and overhangs. It is here that we find enormous stalactites (hanging down), stalagmites (building up) and columns (when stalactites and stalagmites meet) dating from the Pleistocene period. Due to the earthquake mentioned above, some stalactites hang at a 12-degree angle, cluing scientists such an event happened since stalactites cannot form except in a perfectly perpendicular manner. Some formations that happened after the earthquake are indeed perpendicular, and in some of the stalactites that formed before the earthquake one can see the top parts being at an angle and their bottom parts, which kept forming afterwards, being perpendicular.

Jacques Cousteau made the Blue Hole famous in 1972, when he took his famous research vessel, the Calypso, into Lighthouse Atoll and traced a route that is used by dive boats to this day. In fact, it is erroneously often mentioned that Philippe Cousteau, his son, was killed during this trip. However, that happened while he was operating a light-wing plane in Lisbon, Portugal a few years later.

The Blue Hole is not a dive for the hesitant and inexperienced, since it is a dive that pushes the depth limits of recreational diving. There are a couple of sites that are most commonly dove. One is on the east, where the day dive operations usually moor. Another mooring can be found north. This one is reserved once a week for the luxury live-aboard Sun Dancer 2, when it comes to dive the Hole, and whose crew installed it. The sharks the day boats attract by chumming also frequent the eastern site. 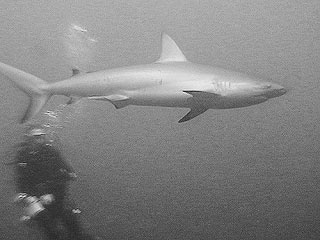 It is not unusual to see more than a dozen large animals of assorted variety; grey, black tip, bull sharks and even a couple of hammerheads might show up whenever you do, just to make sure they have you pumping with adrenalin in case the spectacular depth and geological uniqueness of the Hole hasn’t already. 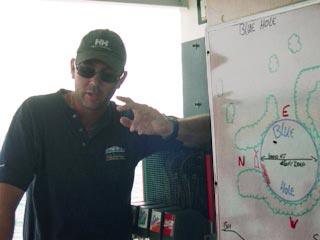 Given the extreme profile of the site, dive masters guide every dive, setting a bottom time limit of 8 to 9 minutes. The descent is done at an angle, heading towards the ledge and overhang that houses the giant rock formations. These appear between 110 and 120 feet. Obviously, buoyancy is key. You definitely don’t want to plummet into the dark.

As a rule of thumb, if you are lower than the dive master, you are too low. If you can look up and see the dive master the size of a thumb, you’re way, way too low. And if you can see the bottom, well, things have really gone pear shaped for you…so watch your buoyancy, the dive master and your gauges!

Given the lack of light and topography that could help orient you, it is strongly advised to descent and ascent looking at the wall. If you look towards the center of the hole, into the deep blue, you could become disoriented and even start feeling the effects of vertigo. Something you definitely want to avoid, since you will surely have to deal with some degree of nitrogen narcosis. Remember, this is as deep a dive as can be made within recreational limits. Stay with your buddy, be cautious, follow the dive master, and relax. Once you have reached the overhangs and the formations come into sight, the dive master will guide you through them in a slow and memorable slalom course. The length of the stalactites can get to around 20 to 45 feet, with approximately 15 to 25 feet in diameter. It is worth noting here that scientists believe stalactites and stalagmites build up to the rate of one inch per 100 years, so don’t break any! But seriously, it is a dramatic sight. If you’re shooting photos or video, you will get the best images by placing yourself close to the wall, behind the formations, and shooting your buddy or fellow divers from below. This will create an outline of the formations and the divers against the lighter background. Using flash or video lights will most likely fill your images with backscatter given the large amount of particles and sediment in the water. 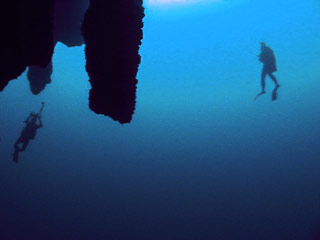 After 8 or 9 minutes, you should begin ascending, slowly, looking at the wall and in an angle, just as you descended. Even though the water in the Hole is constant year round, there is usually a thermocline at around 90 to 100 feet. At 130 feet, the temperature is approximately 72F, so coming up you’ll be greeted not only by the occasional huge Nassau or Tiger Grouper and much more light, but also by comforting warmer water. The top border of the Hole is submerged in approximately 25-35 feet of water. Once you swim over the border of the Hole you’ll do a safety stop for around 15 minutes at 20ft. This is the perfect time to compose in your head that bragging postcard you’ll send to your friends and family, take a quick nap or practice your fish i.d. skills. There are dispersed coral heads with many tiny inhabitants, like Corkscrew anemones, Pederson’s Cleaner Shrimp, schools of Jacks, Butterfly fishies, Slender Filefishes, and various Gobies and Blennies. And maybe, just maybe, you might even witness the fabled Blue Hole Sea Serpent. In the late 60’s a group of divers reported seeing what appeared to be an elongated, semi-transparent eel-like creature measuring approximately 20-25ft. Apparently such a creature could fit the description of only a Ribbonfish or perhaps an Oarfish (Cepolidae Family), however, these being pelagic creatures their sighting in the Blue Hole might seem quite rare. 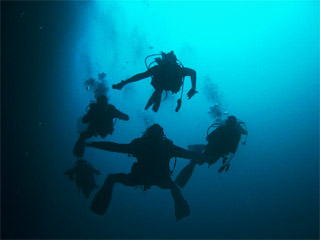 So how does it sound to you? Booked your flight to Belize yet?

Working as a dive instructor in Belize I had the opportunity to dive the Hole dozens of times. Often I would hear comments coming from the been-there-done-that diver who thinks the Blue Hole was not worth diving again, and yet, every time I saw the enlarged eyes of a first-time Blue Hole diver, at 115ft, as the imposing stalactite formations the size of a 15-diver-carrying-dive-boat came into sight, I was reminded of the vibrant thrill of my first ever Blue Hole dive. But hey, some people think traveling into exotic lands and breathing compressed air in shark-infested waters amidst geological oddities is without charm. So, you be the judge. 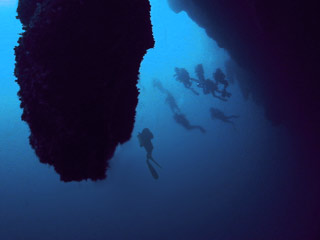 Team PADI has put out a video message to its members and the diving community to welcome in 2021.
Read more