The Dive Middle East Exhibition 2005, hosted by the Emirates Diving Association was held at the fabulous Madinat Jumeirah conference centre, and was opened by the Sheikh and his entourage at 10h00 sharp.  I followed his group around all the stands as he welcomed each and every exhibitor, enquired after their business and offered them every courtesy.

After managing to get a few camera shots of the famous and very attentive Sheikh, I made my way around all the exhibitors to find out who was who.

My first stop was at Scuba 2000 Diving and Watersports,a PIRA Resort Dive Operator based in Al Bidiyah, Fujairah, which is on the east coast of the Emirates.  Scuba 2000 is next to the oldest mosque in the Emirates, Al Bidiya Mosque, and is directly on the beach.  I had the pleasure of chatting to James “Tintin” Quinn, who has recently moved to Dubai from the south of Madagascar where he was assisting on a coral conservation programme with Reef Doctor.  James is ex-British military and police and has instructed in Cyprus, Denmark, Canary Islands and UK.   Scuba 2000 is set up to teach PADI courses up to Divemaster Level, Dan O2 courses and EFR.  They involved with the Emirates Diving Association in the promotion of safe diving practices and the conservation of local wrecks around the emirates. 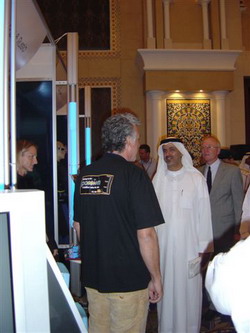 My next stop was at the TDI (Technical Diving Association) stand where I had the opportunity to meet Mr. Karim Helal, who is the Chairman of the Red Sea Association and Editor of H20 Magazine.   He also owns Diver’s Lodge in Hurghada and Sharm El Sheikh (Egypt) where full technical diving training has been taught for over ten years.    Mr. Helal is also the Managing Director for TDI Middle East and Russia.  He was accompanied by his wife Jayne Mayer who set the new female unassisted open water record in the Red Sea a while back, with an exploration dive to 150.7 msw in the Small Giftun Canyon and has also been a bottom judge for Yasemin Dalkilic on her 105m World Record Attempt in 2001.  Divers Lodge will be organising the support and safety for Patrick Musimu in his upcoming attempt in July.

Mr Helal’s mission in Dubai is to develop TDI’s standards as far as possible and introduce all their course work in Arabic.  TDI is the first training agency to teach Nitrox training translated into Arabic.  He also wants to introduce SDI (TDI’s sister company) which is a recreational diving training agency, whose main principal is to teach using computers, and not dive tables.  There is also a very interesting project which Mr. Helal will introduce to Dubai through TDI, and that is the ERDi (Emergency Response Diving International) course, which encompasses Search and Recovery, Forensic, Contaminated Water Diving and Explosive Detection, to name a few of the modules.  The entry level emergency response diving course is designed to give the public safety diver the fundamental skills needed to safely function as part of a public safety dive team and is OSHA and NFPA compliant.

Divers Lodge is also the Dive Rite agent for the Middle East and are looking for distributors in the United Arab Emirates. 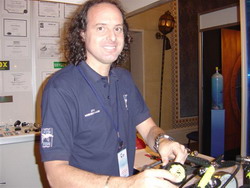 Moving away from divers, to behind the diving scenes, I chatted to Steven McLeod from Scuba Dubai.  Scuba Dubai, in Dubai since 1989, are the be all and end all in equipment servicing and are reknowned as the best servicing company in the U.A.E.  They have four equipment specialists on staff, and are qualified and trained to service all brands and types of equipment using state of the art tools and gear.  Just looking at their wall certification, I wrote down 9 brands of diving supply equipment not including the regulars like Scubapro and Mares.  Mr. McLeod has over 20 years experience of equipment servicing, and Scuba Dubai provide all the testing and certification required for tanks (hydrostatic and visuals).  Scuba Dubai are also the Scubapro dealer for the UAE and I will be chatting to their sales section tomorrow.