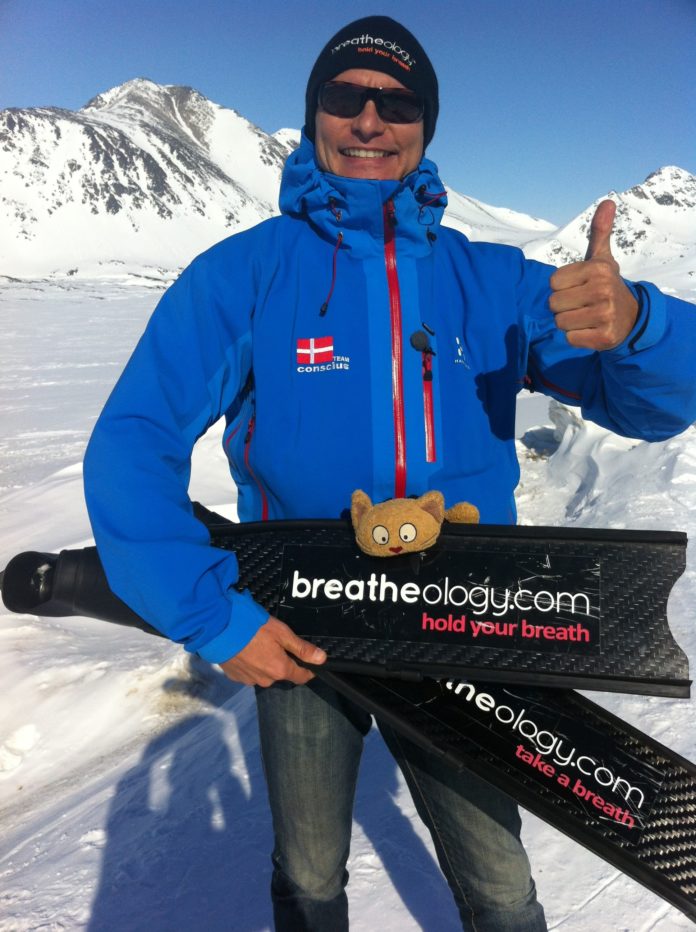 In the midst of a crush of media responsibilities following his record-breaking swim, Severinsen graciously answered email questions from DeeperBlue.com about the event, his training leading up to the attempt, and the logistical nightmare of conducting dive operations in an extreme environment:

DeeperBlue.com: How did the swim feel? Did you experience any numbness at any point?

STIG SEVERINSEN: “The swim felt quite good but was not easy since I had been doing a test dive just before and all equipment was deeply frozen . . . mask, boots etc . . . and in minus 15 degrees centigrade you also quickly get cold in a wet wetsuit! But I decided to give it a try since a big storm was moving in, so we were all under a lot of pressure.

“(Sidenote: It is extremely complicated to travel to East Greenland and very expensive; first over Iceland, then a small charter plane, then a helicopter, then snow Skidoos and dog sleds, so there was no “second chance”.)

“Since I keep my eyes closed most of the time, I don’t see much, but I was diving in one of the most amazing places on our Planet! Breathtakingly beautiful.

“The shock your face feels whilst hitting the freezing water and the numbness is just part of it; it is quite easy for me to block that out!”

DB: How long did it take for your team to saw through the ice and set the cables that you were attached to during your swim/dive?

“SS: It took 3 days to get the course set up. It was near to impossible to get through the 3-feet thick ice . . . it was so compressed and dense. The locals from the nearby town of Tasiilaq did an epic effort and without them this project could never have been realized. About 50 volunteers worked their butts off in these harsh conditions, with ice picks (long special ice picks the hunters use to “probe” the ice for safety when walking over it), chainsaws and even a jack-hammer.

“The main challenge (after actually getting through the ice!) was to remove it all. For safety reasons, we could not push the pieces under the ice — it could block the holes, block the course or cut the suit to pieces like a razor blade). Also we could not simply push it under the ice because it was so thick.

“And we could not cut through the ice — to the water in the lake beneath — because it would flood the holes and prevent further cutting.

“So we had to invent a brand new icehole cutting technique!

“With that we cut, hacked, jackhammered down till only a thin ice cap remained. Then we cut through and with the water shooting up like a geiser we worked quickly to cut it all loose. There was a real risk that the piece we we standing on could be flipped over or cracked, so it was quite dangerous and stressful.”

DB: How many support divers did you have?

“SS: Support team of four divers. One safety freediver and three on Scuba. We also used a scooter to follow me, but encountered various problems with that. It was so cold that the gears froze up and it was hardly fast enough to follow me. The cameras also froze up just minutes before my dive so I actually was fiddling with a camera 45 seconds before I started the dive. Those were the conditions — we just all had to work extra hard to get this done!

“Also, about 4 minutes before my dive started one safety divers had a free flow (frozen) regulator and problems with the air supply to his drysuit, so he blew up like a balloon and got stuck for a while pushed up against the ice roof.

“It was also getting dark (sun going behind a mountain) so all in all very stressful. Apart from a lot of obvious dangers from diving under thick ice, there were also things we could not have predicted. As an example: the safety rope that my 2-meter-long, custom-made Breatheology lanyard was attached to FROZE into the ice roof, and also the extra safety hole froze over in minutes because of the extreme temperatures. So having alert safety divers was VITAL in this dive record attempt.”

DB: How long did you train for this? What did that training involve (aside from the breathing exercises)? Was there any specific cold-water training you did? If so, what was it?

“SS: My mental preparation started long ago when we started to draft the first contract for this Discovery Channel series. After Christmas 2012 I started to swim in frozen/cold water in my Viking club (in Denmark we call it Polar or Winter swimming), so longer and longer swims and dives under slush ice. I also participated in Assikala on the Rocks in Finland – a great and friendly competition run by Antero north of Helsinki.

“Also my breathing and fitness routines change a bit — same with my diet, and I worked closely with a famous coach in Denmark — Umahro Cadogan — who works with diet and Functional Medicine.

“I also had a lot of DNA tests and blood/urine samples done by a pro team (Nordic Clinic in Copenhagen) and besides that worked closely with various scientists. All this and more to unravel what goes on in the human body under extreme conditions. Hopefully to inspire and educate people who watch the programs on Discovery Channel.”

Many thanks to Stig Severinsen for sharing his record-setting experience with DeeperBlue.com.

“The Man Who Does Not Breathe” airs in Denmark on the Discovery Channel on October 20th at 10pm. No word yet on when it will air in North America.