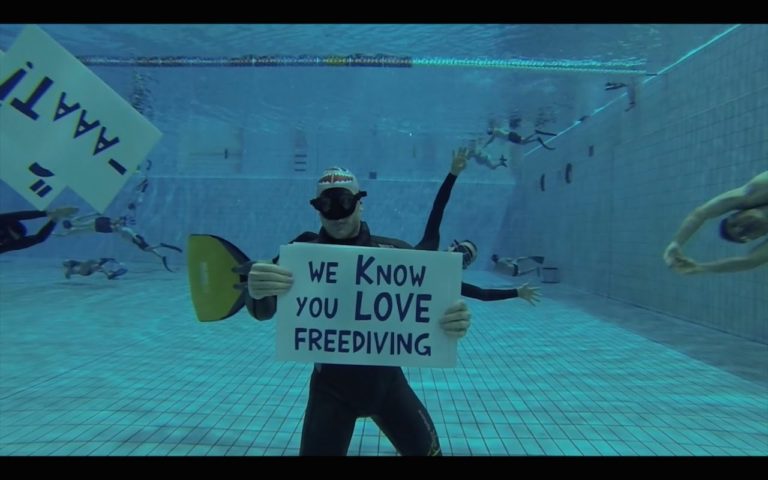 The video above has surfaced this week with a touching story.  29 World Class Freedivers from around the world got together to show their love for a young Australian named Cat Charnley with a passion for Freediving but battling a terrible secret.  She was fighting a losing battle against cancer yet continued to show her passion and enjoyment towards Freediving.  New Zealand Freediver Jonathan Sunnex teamed up with Underwater Photographer Daan Verhoeven to kick off a project to show Cat how much the Freediving world loves her and her courage and passion.

Sunnex spoke to DeeperBlue.com to give the background to this project:

“I first met Cat Charnley in 2013 when she came to do a freediving camp with me in Dahab, Egypt. She was young, enthusiastic and very talented. Within the space of 10 days she progressed from a 20m novice freediver down to 50m, all too easily. Her bubbly, cheeky personality made her a pleasure to be around, but her smile held a secret. She had been battling cancer already for a more than year, and had defied the odds to have made it that far. But she always put up a smile and shared a laugh, and if she didnt tell you in confidence, then you would never have guessed. Cat continued to freedive and later in that same year went on to represent Australia at the Kalamata Depth Worlds champs. She was awarded best female newcomer by the Australian Freediving Federation and the following year came oh so close to giving the Australian CNF NR a nudge in Hawaii. An amazing feet for someone who has there health, this is all the more amazing considering the battle that she has been fighting.

Since her diagnoses Cat has traveled the world, freediving, adventuring, and making the very most out of each and every day. She has been courageous, kind and inspiring to all that have met her and she has touched many, many hearts. Whilst we have all clung on to the hope that she would overcome her illness, things haven’t been going too well lately. So, I wanted to show Cat what an effect she has had on us all in the freediving community and for us to be able to give her something to make her smile everyday. Whilst discussing the idea with mutual friend and fellow freediver Lewis Jones the theme was born and freedivers from all over the world, from or in every continent(bar Antarctica), and with not less than 6 current or former World record holders, have gotten behind the idea showing originality, humour and love. The video was pieced together masterfully by Daan Verhoevan, who so very generously gave up his time and resources, to Cats favourite song.”

This is a touching story and you can see the video above.  I warn you you might have a lump in your throat by the end.