One of the largest giant squid ever found was put on display at London’s Natural History Museum yesterday.

Visitors can see the 30ft-long creature, which was caught off the Falkland Islands last April, as part of a behind-the-scenes tour of the museum’s Darwin Centre. 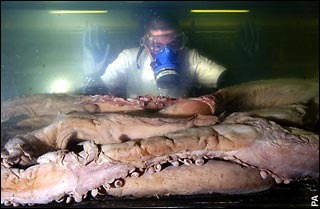 The squid, architeuthis dux, is one of 22 million preserved zoological specimens stored at the museum.

Giant squid are one of the ocean’s most mysterious inhabitants.

Living at depths of up to 3,300ft, they are rarely seen and have never been properly studied in the wild.

They have eight thick "arms" plus two extra-long tentacles, each lined with suckers ringed with teeth which it uses to ensnare prey.

It also has the largest eyes in the animal kingdom, measuring up to 10 inches across.

Last September a team of Japanese scientists filmed a giant squid in the wild for the first time.

Reports of giant squid, which can weigh up to a ton, date back to the 1530s when sailors mistook them for mermen or sea serpents.