On the 26th December 2004 a major earthquake off the west coast of Sumatra produced a devastating tsunami, which was sometimes over 10 metres high when it crashed into coastal communities.  Within hours of the earthquake over 200,000 people had been killed as the tsunami impacted on the shores around the Indian Ocean.  Sri Lanka was the second worst affected country with over 30,000 deaths and approximately half a million made homeless. Most of this damage occurred along the coastline south of Colombo within a kilometre of the shore.  Thus, a missing persons & death toll of about 400 people from Tangalle area, the figure given to the Mantas Dive Team, seems entirely credible. 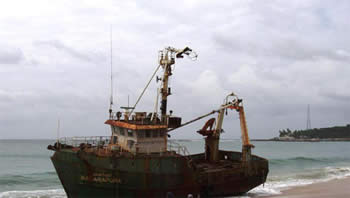 The post tsunami humanitarian relief efforts in Sri Lanka were widely praised in the first few months after the disaster.  Clean up operations were launched and the threat of epidemics was averted. Basic repairs of the transport infrastructure were also implemented.  Furthermore, Sri Lanka was promised $3 billion both for relief aid and to continue the process of long-term development.

However, six months after the tsunami there was increasing frustration concerning the recovery efforts.  Few families had received compensation for their losses.  Only a few thousand of the 90,000 homes needed had been built.  The rule of no buildings within 100 metres of the sea was regarded by many in crowded coastal villages as an unnecessary frustration.  There were difficulties & delays in the disbursement of aid in Tamil areas, as Sri Lanka’s fragile peace has threatened the long-term recovery from the combined effects of the tsunami and twenty years of civil war.  The August assassination of the Foreign Minister, Mr Kadirgamar, gave an indication of the difficulties facing this beautiful island of Sri Lanka.

It was in this context that the Kuwait Mantas Dive Club were asked in May 2005 if there were any volunteer divers willing to visit the Tangalle area and investigate ways of lifting tsunami debris from the seabed.  It was believed that such debris was snagging fishing nets, and thus hindering near-shore fishing and the general economic recovery from the tsunami disaster.  By early August Mike Dalton of Kuwait Mantas Club had been put in contact with two Sri Lankan organisations i.e. the National Institute for Fisheries and Nautical Engineering [NIFNE] and Coastal Resources Management Project [CRMP], who both agreed to provide support for the divers.  Four dive volunteers i.e. Mike Dalton [team leader], Robin Killner, Paul Keeley and Jeremy Dalton arrived at Tangalle on 13th August to see what could be done. 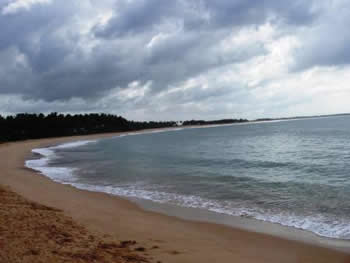 The main aims of the Mantas Dive Team were as follows:

The Dive Team made a total of 6 dives in the MawellaBay and offshore from Kalametiya beach.  MawellaBay is several kilometres west of Tangalle.  Along the shore there is ample evidence of widespread tsunami damage with destroyed houses, damaged boats and fencing half-buried in the sand.  Four dives were made here on 14th August when there was a calm sea but cloudy conditions with regular rain showers.  The dives took place at sites where local fishermen said there were underwater obstructions hindering fishing.  On all the dives extremely poor visibility was recorded, down in one case to 0.3 metres.  No debris of any sort was found on any of those dives.  The following day the Dive Team started a survey off Kalametiya beach.  This was a much sunnier day, but there was a steady wind and significant wave action.

Visibility was appreciably better, about 2 metres, but the dive group again failed to find any debris.  Moreover, the Dive Team met a local diver from the village who said that most of the tsunami debris there had disappeared within four weeks of the disaster.

There was much discussion on the evening of the 15th August concerning the failure to find any sort of debris.  It was noted that much of the coast in the above two localities showed constructive beach features, and that the seasonal southwest monsoon winds encouraged both high energy waves and longshore drift.  Thus, burial of debris by sediment shifting in waters 5-10 metres deep seems highly likely.  It was also noted that the costs of the dive operation for NIFNE & CRMP were clearly much greater than the benefits obtained.  With reluctance it was decided to halt the debris recovery operation and concentrate on other issues.

Although there was no debris found on the seabed in August at these two locations, it is quite possible that the onset of the northeast monsoon in November will result in the exhumation of such debris on the seabed.  A later seabed survey before March may therefore be justified. 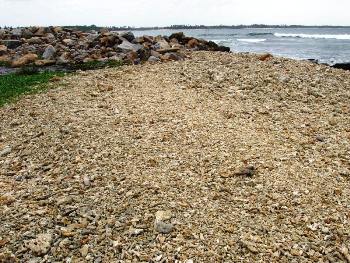 With the lack of suitable debris to lift, the plan to train local divers in the techniques of underwater salvage were also abandoned. However, by Day 3 of the project it was appreciated that NIFNE employed local divers, and that these divers were highly experienced but not certified.  The abandonment of salvage operations was quickly followed by the proposal from Mike Dalton and Robin Killner, who are both factory managers in Kuwait, to employ one diver [Mr Chandana] in Kuwait for a sufficiently long time to enable him to qualify as a PADI instructor.  He would then return to his employment at NIFNE in order to improve diving skills & certification among local divers. A major snag with this type of aid is that, although the Sri Lankan divers we met have the diving skills needed for certification, they do not have sufficient English to pass an English-based PADI examination.  All those concerned with this project recognize the importance of improving the English of Sri Lankan divers, especially those who could become involved in the tourist industry.

Thus, the project shifted from tsunami relief work towards long-term development work.  However, the training of a Sri Lankan diver in Kuwait depended largely on arrangements which could not be made until Mike & Robin returned to Kuwait.  This meant that these two divers had free time on their hands, while they waited for NIFNE approval of their proposal.  During this time they visited a NIFNE training ship which was stranded on Tangalle beach. Following an inspection of that vessel they concluded that the vessel could not be readily floated with the equipment locally at hand.  As the hull was being constantly pounded by the surf, they proposed to NIFNE that the vessel is stripped of all still-functioning parts [e.g. crane, engine etc] as soon as possible as the surf is liable to break through the hull within a matter of weeks.  A letter has been sent to NIFNE headquarters to that effect. 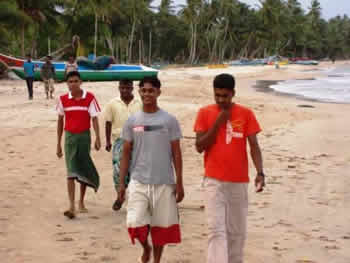 They also visited the remnants of the ‘Let’s Dive’ commercial dive operation, which has been out of operation since before the tsunami.  The issue here is whether or not commercial tourist diving is viable in the Tangalle locality.   The fact that there was a commercial operation suggested that the area has potential.  However, this operation closed before the tsunami, which suggested that there may be only limited trade for the foreseeable future.  Moreover, comments in ‘The Rough Guide to Sri Lanka’  p184 are not encouraging.  The various dive websites on the Internet mention the Basses reefs to the east of Tangalle.  The diving here is said to be excellent, but this stretch of the coast is exposed to both the south west and the north east monsoons so the weather and waves permit diving only in March-early April.  Local residents also mentioned the rock pinnacle a few kilometres to the south of Tangalle harbour as a dive site used by Let’s Dive.  The Mantas Dive Team hired a boat later in the week to visit this dive site.  Although the wind was slight and inshore waters relatively calm, there was a marked swell out at sea and white water around the submerged rock pinnacle.  The exploratory dive in deeper water & better visibility was aborted before it started.  Thus, the Dive Team concluded that much more information about the weather, sea conditions, and tourist characteristics would be needed before there could be confidence in a commercial dive operation.

One member of the Dive Team may well return to Tangalle in the tourist season to get some idea of the sea conditions etc at that time.  Even if there is good potential for tourist diving along this coast, the operation would require significant capital investment for equipment & buildings, which at present are completely destroyed.

I retired from teaching in June, and when the dive salvage part of the project ended I began to look for development/environmental projects in which to get involved.  Mr Piyasena, the Director at the College of Fisheries & Nautical Engineering, pointed out that there was a strong demand for improved English at the College.  Thus, I spent much of the remaining three weeks of my visit to Tangalle teaching English to COFNE students & staff and CRMP staff.  There was also sufficient time to investigate other development projects in the district, so by the end of the visit I had several projects seeking support.  The details of these projects are given in a separate report, but they include:

I would be most pleased to hear from anybody interested in supporting any of these projects.

The following are the main recommendations from the Mantas Dive Team:

Those concerned with this project may need to be contact with the following:

3.      Mr Erwin Rathnaweera, a development worker who provided most of the organisational & personal links which enabled this project to take place, at crisherwin@hotmail.com

4.      Francesca Koe, a member of a San Francisco group of PADI instructors who have formed a group “Scuba to Help the People of Polhena” [Scuba POP] at Francesca@undergroundads.com