Just 35 minutes from Capetown, along the Falsebay coast, lies the beautiful naval town of Simonstown. The nearby region supports a variety of traditional fishing boats, along with the colourful characters who seem to always be an integral part of any fishing community.

The quaint coffee shops and stores of Simonstown bustle with locals and tourists, and one cannot escape the laidback holiday feel which hangs in the fresh sea air.  Each morning, as the first signs of pre-dawn light cast up from behind the Hottentots Holland mountains on the far side of the bay, the small fishing fleet can be seen leaving for the mornings run.  The scene is tranquil.

And each morning, as that night sky starts to show the first hint of colour, one of the most spectacular animal contests anywhere, prepares to play itself out around a small Island about 35 minutes offshore. It’s called Seal Island, and for those interested in Great Whites, it is a unique…and very special place. 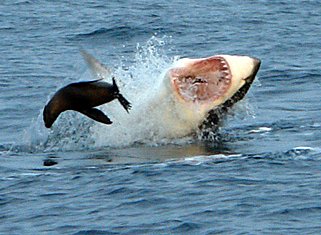 On friday morning, my alarm went off at 4:30 am, and within 30 minutes I had showered, eaten, grabbed my camera, and was enroute to Simonstown for a dream trip. I had been invited to go out with Chris and Monique Fallows of Apex Shark Expeditions. The husband and wife team have recorded over 900 trips to Seal island, as well as having visited all well know White Shark sites around the world. The famous White Shark breaching photographs of Chris Fallows are legendary with marine lovers worldwide, and the couple have worked on countless television documentaries, including Air Jaws 1 and 2.  As impressive as the statistics are, the most noticeable quality is their love and passion for these beautiful animals. 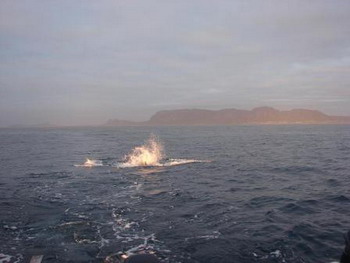 Before first light, the 2 big Suzuki motors were powering out of the Simonstown harbour, and apart from a small swell, conditions were close to perfect. I was unable to stop smiling as the cold, pre-dawn wind and salt spray added to the excitement of my long awaited dream of travelling to Seal island with Chris and Monique Fallows. 8 nautical miles away, the first groups of seals were preparing to run the gauntlet from the Island to their own hunting grounds, as they do every day. And just off the island, patrolling deep, watching, and waiting for the run to begin, were the Great White sharks, as they do every day. 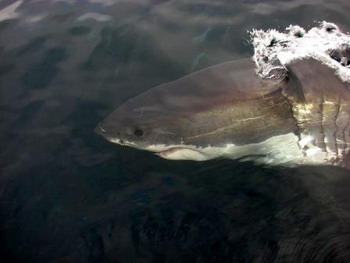 The sky over the far mountains was a beautiful pink as we arrived, the peace was eerie, almost unnatural in view of the events that were to be unfolding. An instant so sudden, about 100 meters off the starboard bow, a muffled spash, and blur of birds. Only Chris had picked it up, a White Shark had hit a Gannet, mistaking it for a seal, and the bird lay stunned on the surface. It was very lucky to survive.

As the pre-dawn light began to dance on the white water which foamed over the reef that forms the ‘launch-Pad’, the area which is the starting point for their desperate run for deep water, the first of the seal groups had already departed. Seals have amazing insticts, an obvious communication, as they leave the ‘launch pad’ in groups, with exact distances between the departing groups. The urgency, appearing as almost a panic, is obvious when they spot a shark. But, as Chris explains, the rapid changing of positions and melee is probably a strategy, designed to confuse the shark.

As the day breaks, and the mountains above Muizenburg become a fiery orange,  the tranquility is continually shattered by an intriguing game of roulette. It’s a life and death struggle, and a battle of wits between the seals and the worlds most efficient predator. It’s a battle fought on many fronts, and the excitement in our group is palateable as the boat races from predation to predation. At times, we arrive in time to see a pool of blood, oil, and and the eerie silence. Then the birds explode in another area, and as we look over, the unbelivable sight of a huge shark breaching completely clear of the water, spinning through 180 degrees. You can see the video’s as often as you like, but nothing prepares you for the violence and power of a breach and natural predation.  A young seal pup has left his group, and we are told that this is the common, and often deadly mistake.A crazy thrashing of white water and chaos, and soon the young seal is fighting for his life. Amazingly, an inbuilt instict tells it to get as close as possible to the very animal that is hunting it. I watched in silence as the seal twisted, jumped and dived, staying behind and as close as possible to the enourmous jaws. My heart was going out to it, as it the contest came across a piece of floating kelp.  The seal, amazingly, knew this was his last chance, and he used it, clinging on whilst looking down to find the shark.  Incredibly, the shark appeared to have lost interest,  and the young pup hung on. As tempting as it is to assist, nature cannot be disturbed, and Chris and Monique moved on, leaving a scene that they must have experienced so often. "He has a long way to the launch-pad" said Chris as we left. " I hope the litle guy makes it, but he’s got a way to go still.." 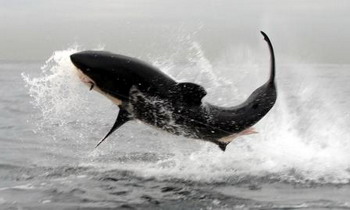 Every predation, every event, every shark and every detail of that morning was carefully documented by Monique. We must have seen at least 8 hits, and according to Chris the seals get away about 50 percent of the time. Moving through the kill zone, Chris let out a  small carpet decoy behind the boat to offer those on board an opportunity to get a shot of a breach. He will only pull the decoy for a very short time, it’s not something he is keen to do, and the rest is up to luck. We waited only 5 or so minutes when the unforgettable, crazy, and awe inspiring sight of a Great White blasting vertically out of the water just meters away took place. It is quite simply an event you need to see. My words will never,could never, do it justice.

I pressed my shutter by reflex, I was’nt even looking thru the viewfinder. To my joy, I had the moment in all it’s glory! As the day warmed up, the predations ended, although overcast conditions had kept up activity  longer than usual. We dropped anchor, and soon, were joined by ‘Linford’ and ‘February’, the 2 biggest sharks I have seen, both over 4 meters, and both old ‘friends’ of Chris and Monique. Chris uses no chumming at all. Once again, the encounters are as natural as possible, with a little as possible done to disturb the way of life around the Island.

The excitement of the couple was so evident as the enourmous shapes glided  gracefully around the boat. They are openly overjoyed to see each and every shark that arrived, almost as if they are family, and that is something that puts their entire business into clear perspective. In a strange way, Chris and Monique are family of these most beautiful of animals. And as I left their ‘home’, watching the harbour of Simonstown draw nearer, I had a mass of images in my mind.  The distant orange of a pre-dawn light, the black silhouette of Seal Island against a fiery red sky, the panicked ballet of a seal pup, the huge white underbelly of the Great White shark as it ascends vertically, and the paradyme- shifting explosion of a Great White breach. But the strongest image was that of a young seal as we passed by the far side of the island close to the group that played excitedly alongside the boat. His eyes met mine, and I saw what appeared to be the face of a playful, excited puppy. He looked content and happy. For a second, I had connected with him, and I found myself offering him a silent wish of good luck in his daily game of roulette…as he ran the gauntlet.

My passion, and most importantly…my understanding of the White Shark continues to grow. Thanks to Chris and Monique Fallows and Apex Expeditions for an unforgettable day.

Would A ‘Diver Down’ Buoy Help Keep Divers Safer Than Just A Flag?