It’s not that often that you find the wreck site of a near-intact sailing vessel, but a group of underwater explorers who frequently dive the waters of Lake Michigan recently announced they’d found exactly that.

Shipwreck hunter Ross Richardson said on his website that the discovery happened almost by accident earlier this year:

“We were on our way to South Manitou Island and I wanted to show my cousins how we look for shipwrecks. The sonar was only running for a few minutes when something interesting appeared on the sonar display screen. I logged the position in my GPS and we continued to island to spend the day exploring. I returned to the site about a week later to better survey the site. The sonar showed something rising 90 feet off the bottom, which is very unusual.”

That “something interesting” was 300 feet (91 meters) below the surface, well out of Richardson’s diving range. He subsequently returned to the site with rebreather diver and underwater photographer Steve Wimer, and they were able to take photographs of the shipwreck, with its masts riding 90 feet (27 meters) above the lake floor.

Subsequent research revealed the ship to be the W.C. Kimball, which sank on May 8th, 1891 during an ice storm. The Kimball was carrying a cargo of 200 salt barrels and 250,000 wooden roofing shingles.

Check out the full story at Richardson’s website, michiganmysteries.com or watch the video below. 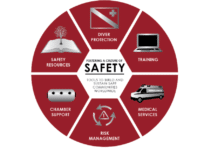