Nothing is all I heard this morning. The normal inhale and exhale of mother nature through the trees was somehow missing. It’s as if she held her breath for day one of the Performance Freediving International Grand Cayman 2005 record attempts. It was a welcome apnea performance as it has been blowing unusually strong for the last few weeks. In the still of the morning the safety divers began to appear from their bungalow. One by one they passed the nerve center of the whole operation, the bar, with rebreathers in hand. A pensative single file of “Jacques Cousteau” submariners with bright yellow tanks and snaking black hoses. They were assembling in front of Dive Tec for the first of what will be many meetings to come. 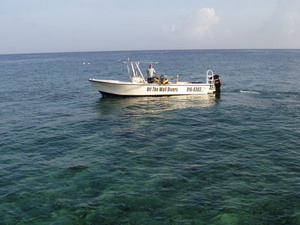 The weather was just right for us to depart from the dock behind CobaltCoast, the resort  where we are staying. What an incredible set up they have here. A 5 star resort with high speed wireless outside, the dive boat TENATA parked at the end of a 500 foot dock that is literally a stones throw from the unfathomable Cayman wall. As a matter of fact I am writing this article from the end of that dock on my lap top! It’s just amazing. 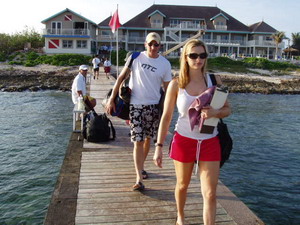 After a lengthy safety meeting the 20 or so participants left the dock on “Off The Wall Divers” and “TENATA” for the 3 minute drive to the dive site. It took about an hour to set up Kirk’s counter ballast system and the bright yellow sled they call “The Beast” There were many more helping hands this year than last and it made the whole process a lot easier. There were some technical problems though. One of the specialized lights on the sled that is designed for extreme depth was bubbling at the surface. This could mean only one thing. A leak! Safety diver Tom Lightfoot quickly removed the light and after many minutes and futile attempts at resuscitation it was pronounced dead. So the sled had to be sent down winking with one eye closed.

The PFI team has their timing down to a science this year. After the equipment was set up it took less than 40 minutes to complete two record dives. First in the water was Mandy-Rae. I knew it was going to be a good dive for her. I was watching her as she gently held the warm up line in her hand while her feet drifted in the current. Sometimes you can just tell a divers mindset by something as simple as their touch. Kirk floated Mandy face up to the dive line as she was breathing up. The two have developed a ballet like working relationship with each other. Last year Kirk was the matador. This year he is Baryshnikov. Three, two, one, official top and with twenty packs she started her squid like pulses to a world record target of 50 meters. Like a breaststroker with no sense of direction she disappeared into the blue void. On her return I could see she was taking her time which is always a good sign. She broke the surface two minutes and eight seconds later with no apparent problems. It appears that one of the side effects of CNF is to kiss Kirk Krack as she did this liberally. I will have to keep this in mind the next time I train with Kirk!

Within 20 minutes American doctor “Doc” Lopez was ready to take an historic plunge for his country. Since the newly formed U.S.A.A. has many “open” records Doc decided to step up to the plate. Or swim down to it, which ever the case may be. The PFI timing was again obvious this year when Doc was already warmed up and ready to go by the time the sled was set and the bottom video camera tape was rolling. The “Aquatic Rhino”, as he is called in some circles, was ready. The ICU representative and CEO was a major sponsor for PFI this year and it was the yellow ICU label on his wetsuit that I was watching in my video camera as “The Beast” tore by. It’s amazing how fast that sled can go if you can’t hear a countdown. I was one of the official videographers and found myself chasing the sled as it whizzed by me. The sled disciplines are fast! It was no time at all before the beast turned into a rhino pulling and kicking his way to the surface. Doc came charging out of the water with horns flailing. He gave the ok to the judges and then personally told everybody he was ok. I guess he really wanted everybody to know he was ok. It was obvious that has a lot more in him than the 50 meter U.S. record he set today. The next few days will tell. The one regrettable portion of the day was leaving the shore without Martin Stepanek. A few days back he crashed into the Cayman wall head first on a CNF training session. As a result he developed neck and low back pain. He has seen a local Chiropractor and is progressing well. He may join us tomorrow for moral support but he probably won’t dive until Monday.

By twelve thirty this afternoon we were comfortably back at the dock counting new records and unloading the thousands of pounds of gear that sustained us. One final mishap that caused some concern was the sudden death of a Sony video camera. It seems it drowned during a rinse attempt. It will be sorely missed. Mother nature can giveth and she can take it away.