So what’s the difference between yesterday and today for the PFI team? Martin Stepanek, that’s what! It was a surprise to see Martin carrying his signature dive bag to the boat this morning. I thought he might be carrying someone else’s bag for them since all the team members have that cool black and blue bag with his name on it, including myself. So when I boarded the boat today I did a quick count of the bags and deduced that Martin intended to dive. 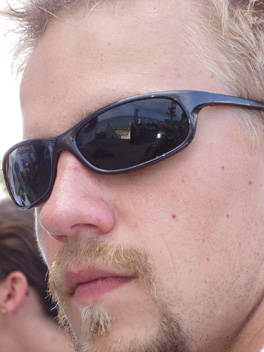 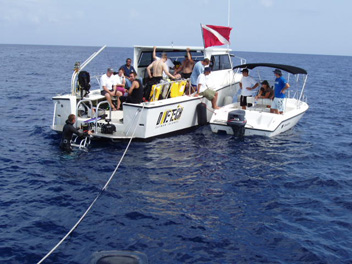 The problem we were having was current. Subsurface current to be more specific but, it wasn’t until Mandy’s dive that we would find out exactly to what extent. We pulled the lines up on an earlier spot for the same reason and by the time we finished our 20 minute jaunt we thought the problem was solved. We dropped the lines in the water and they looked just fine. On an initial dive to 30 meters I glanced up at the boat and with all the lines hanging down over the side it resembled a jelly fish with red and yellow tentacles and it was about to sting us!

The first person on the slate for today was Mandy. Once she entered the water she looked liquid. Her warm up was once again slow and fluid. By the time Kirk had shuttled her to the line she looked like freediving goo. When she started her decent it seemed like she was in slow motion. Hand over hand over hand until she crawled deep under the blue blanket. None of us expected that it might almost put her to sleep. Kicking the covers off, she peered from under the blanket looking wide awake. Pulling briskly hand over hand over hand until she gained enough momentum to glide on her own. She surfaced quickly to a supportive crowd. Then it happened. A slight shake that would cost her the record. 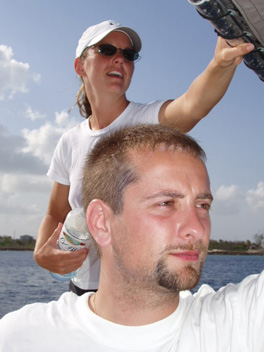 She told us that the current at depth was strong enough to push her feet out of position causing her head to bump into the line a few times. Current is never a good thing for freedivers. In the NF category it’s a nightmare. Without fins a diver has a difficult time maintaining his position in the water column. So things weren’t looking good for Martin’s Constant No Fins attempt.

The last thing that Kirk told Martin before his breath up was Mandy’s dive report. I wondered how this would effect Martin. Two days ago he was laid up in bed with a bad back and now he’s doing the squid to 80 meters. Would he make it or would be left holding the bag? If he was worried he didn’t show it. It took just a few moments for him to pack, roll over and start jetting his way down the line. When you follow the athletes closely with a camera during CNF you can see their graceful moves. It is only when you watch them from a far that they look like squid inking their way down the line. On Martin’s return his breast stroke looked strong and purposeful. Kirk glided down to meet him and the two swam in tandem back to the surface to set a new world record in CBN. A totally unexpected performance sans ink! 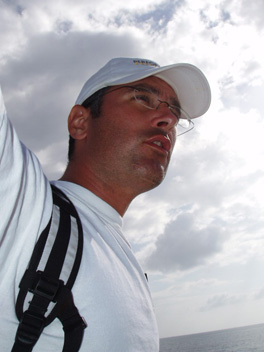 Martin told a similar story about the deep water currents. He said that it added an additional 20 seconds to his total dive time. I don’t know if anybody informed Doc about the current but he was next. Earlier in the day the training line was slowly working its way around the stern of the boat due to a persistent light wind. Its bottom plate was almost crossing the sled line due to the combined effects of wind and current. If Doc did know about the squiggly lines it didn’t seem to matter. I think Doc has been the one who has made the biggest strides during the whole PFI Cayman 2005 event based on percentages. I remember all the hard work he put in last year with Kirk, Martin and Mandy. Even though they were in different disciplines Doc went from a comfort zone of 37 meters to a comfort zone of 50 meters. That’s a huge jump in a one year period.Now Kirk wants to sit him on a giant steel sled, drop him into thousands of feet of water with a brief stop at 57 meters only to make it back any way he can. 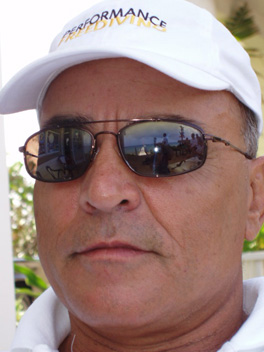 It was a determined Doc Lopez that jumped into the sled at a little after 11 am today. After mounting the yellow submarine his fins were neatly tucked into the base. With a clink of the snap shackle he disappeared under the water with me trying to catch him with the camera. I chased him to 20 meters and then gave up because I was loosing the race. In no time he was swimming his way to the surface with Kirk just inches away. He made a clean recovery and swam back to the boat after an ok from the judges.

I sat down with Doc at the end of the day and he shared today’s experience with me. It seems that he had a very good warm up. His breath holds were a comfortable three minutes and ten seconds. That’s why he was a little concerned when he got behind on his equalizations on the sled. He said he was just about to bail when he looked down and saw the end of the line just a couple meters away. He decided to take it all the way despite the slight stretch he felt in his ears. It was a calculated risk that paid off. He promised to be more vigilant with his equalizations on his next attempt. All in all it was a good dive for Doc.

The PFI team has 5 more days to take themselves further than man has ever gone before. I think Kirk is going to have to buy one of those mesh dive bags to put all their new records in. Although, with the current around here if they drop the bag it just may float off to the island of Tonga! 🙂

Mako Shark Surprises Fishermen By Leaping Onto Their Boat