Conditions for diving in Roatan were perfect yesterday. Sunny skies, calm cornflower blue water, and no signs of current provided the perfect backdrop for the world’s strongest freedivers to make their marks at the 2017 World Championships in the freediving discipline of Free Immersion (FIM). Alessia Zecchini of Italy triumphed in her quest to take home top honors and the gold medal. Like the rest of the freediving community Zecchini is still processing the loss of friend + coach Stephen Keenan; and despite experiencing some physical ups & downs since arriving in Roatan, the Italian upstart persevered to complete a very clean white card FIM dive to 88m.

“We trained very hard for this discipline,” shared Zecchini “and he (Keenan) said to me do 88…”

The realization of this medal-winning performance not only achieves the goal her coach Stephen Keenan had for Alessia but provides a firm foundation of confidence to boost the slight-of-frame but surprisingly powerful competitor through the rest of the competition.

Also manifesting an internal strength and unmatched physical prowess was Sofia Gomez Uribe. The Colombiana always demonstrates a focus on training & athleticism that is unparalleled, but when an upset stomach & vomiting dominate the morning, it’s extremely hard to even want to go diving, let alone deliver a world-class performance of 86 meters. Sofia tackled both yesterday.

“My dive underwater was really nice, but before the dive I was really sick! I’m thinking to myself ‘my stomach is feeling really weird, I am not feeling 100%’ and the truth is I was also nervous. Johnny was looking at me with a really disappointed face and asked me if I wanted to DNS, but I decided I didn’t and I’m happy with a silver medal from my first individual WC’s and it takes the pressure off! Now it’s a matter of enjoying what I’m doing.” said a relieved Gomez Uribe.

The 2017 WC podium for free-immersion was rounded out with a personal best & national record-setting performance by Jessea Lu of China.

“I’m super excited about this dive!” quipped Jessea, (who in addition to being a contender on the international competitive freediving scene is also a PhD.)  “It’s a PB; 86 meters is my personal best by one meter! For me the ascent is always the most relaxing, even if it’s hard physically. I try to just accept everything – on the surface I was very happy.“

Offered a very pleased Jessea in her post dive interview. With both Sofia and Jessea accomplishing equally deep white card dives to 86m FIM, they each receive a silver medal.

The third deepest dive of the day was an elegant display of mature strength from Sayuri Kinoshita of Japan. Sayuri’s grace underwater belied a problem she was having with her sinuses. The petite Kinoshita never looks tense and always makes everything look easy – and was very pragmatic about her 85m FIM dive (which secures yet another national record for the World Record holder in no-fins).

“I had good equalizations during my dive but I was worried about my sinuses because I could hear them screeching in my nose ‘eeeh eeeh eeeh’.“

There is no doubt that Sayuri has the fortitude and capacity to challenge all of the world records in every discipline, but seems to feel most comfortable with the slow and steady approach that has provided her with tremendous success so far.

Check out a full listing of all of the women’s results here below and stay tuned as the competition heats up today with the men going head-to-head in free immersion and the adventure into CWT and CNF is just around the corner. 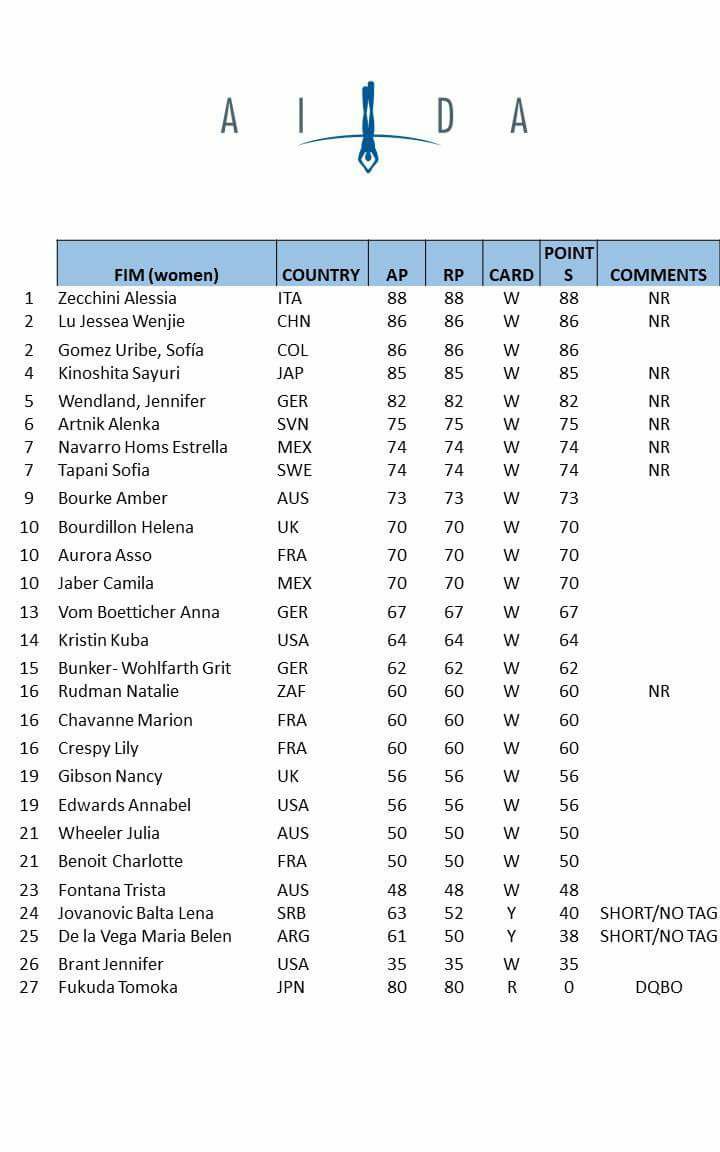 A team of researchers has conducted a study to determine the migration patterns of smooth hammerhead sharks (Sphyrna zygaena) in the western Atlantic Ocean.
Read more