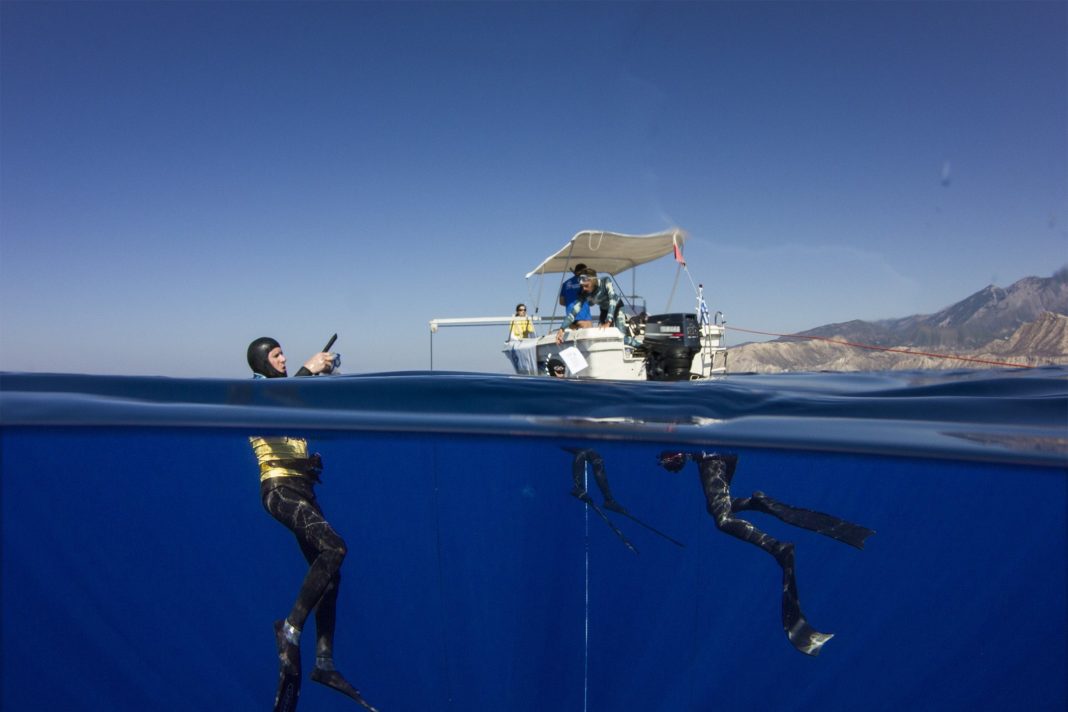 The 7th Mediterranean World Cup is well into its 3rd week – The Competition Week and amazing weather is letting a cool group of freedivers achieve some pretty impressive dives for early in the freediving season!

The Mediterranean World Cups or more affectionately known in our freediving world as the Med Cups are now into their 7th year and organizer, Stavros Kastrinakis of Freediving Club Greece (organizer of the 2011 & 2013 AIDA World Championships), was happy to welcome a great group of 25 freedivers from 13 Nations in this year’s event organized in the sea outside the village of Myrtos in the south of Crete. The weather this year has provided the group with amazing conditions to train and compete, as most days we encountered calm seas with no current and temperatures of around 23C which were allowing us to dive with suits as thin as 1,5 and 2 mm with ease.The Med Cup events are structured with 2 weeks of organized training followed by 1 week of depth competition which this year allowed for 5 competition days with a choice of any of the 3 disciplines (CWT/CNF/FIM) on any of the competition days. This allowed athletes who want to train on one discipline to have multiple attempts to achieve a PB or a national record and for those that want to try to win the 7th Med Cup trophy more than one dive in each of the 3 disciplines. (Note the winners of the Med Cup are the freedivers – man & woman – with the highest total score in the three disciplines CWT+CNF+FIM)

On the competitive side of things, world class athletes Jesper Stechman (DEN) and Yaron Hoory (ISR) are leading the overall ranking of the event with Tim Money (UK) showing solid results in 3rd position and amazing newcomer Cezar Bettencourt from Portugal closing up in 4th place having already achieved 3 National Record in this competition. Joao Felipe Costa has also achieved 2 National Records for Portugal putting pressure of Cezar which is expected to culminate in the coming days.

In the women categories Liv Philip (UK) has managed a very impressive overall score in all 3 disciplines with just 3 competition dives (CWT 55m, FIM 50m, CNF 40m) which puts her in the lead for overall winner after participating for just one week at the Med Cup due to a busy work schedule. Desiree Balfelt (DEN) and Georgina Miller (UK) are closing the top 3 for the women separated by just a few points. French Champion Aurore Asso has been training hard to reclaim her French CWT record and is already close to the 70m mark and Polish newcomer Monika Zawistowska has just set a National Record of 52m in Free Immersion.

With two more competition days left, this is just the start of it all as the Med Cup this year is the 1st segment of the 2014 AIDA World Cup Circuit organized by Freediving Club Greece. The second event is the 2014 EuroCup which will start on August 25th in Kalamata, Greece and the joint results of the two events will give us the World Cup Circuit winners who will be claiming impressive cash prizes and amazing freediving gear gifts! 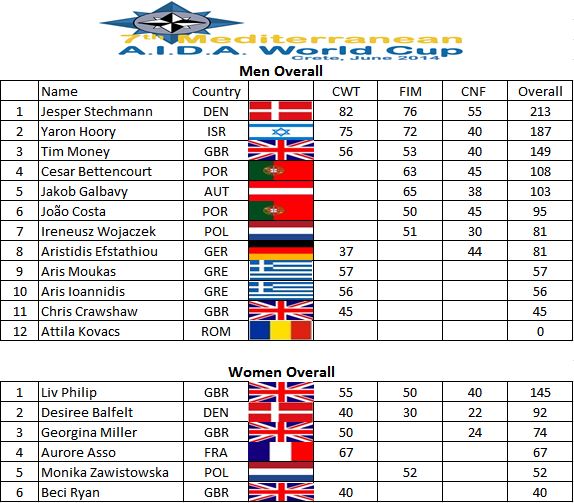 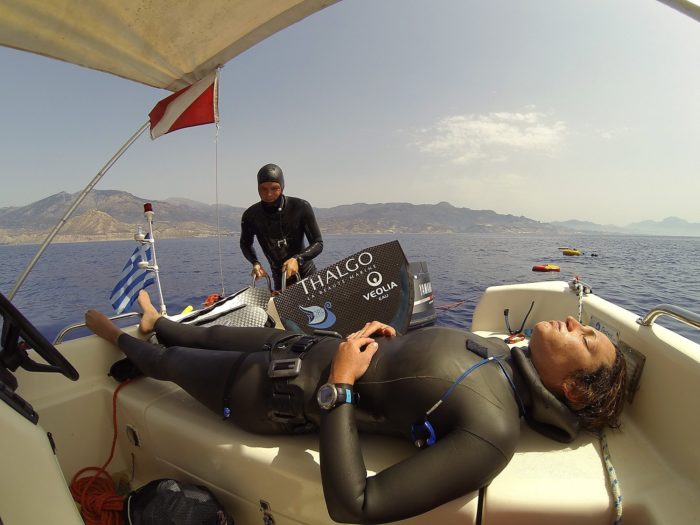