The women have been consistent and measured in their approaches to this year’s AIDA Depth World Championships. Which has been manifest in their good moods and the sheer number of white cards they have garnered throughout the competition. The final heat for Constant Weight No-Fins (CNF) this past Friday demonstrated the benefits of this smart strategy and having a good coach. Taking home top honors as the gold medalist and world champion in CNF Sayuri Kinoshita, surprised no one except herself.

“To tell the truth I had no confidence I’d make 70 meters because I didn’t train at all in Japan, so I was actually thinking I might announce 68. But Mimi (Misuzu Okamoto) said to me ‘Trust me! Do 70. I trust you can do it!’ so I announced 70m,” relayed the petite powerhouse, “I felt good during my dive and I really enjoyed it!“

As the women took their turns in offering the best performances they could muster, a couple of their male colleagues were commentating, critiquing technique and admiring the prowess of the female athletes. “Sayuri has swimmers feet,” boasted Alexey Molchanov, who in another life was also a trained swimmer. “Sayuri is so efficient and so fast in her descent. She is faster than me! I wish I could be more like her.” exclaimed the Russian champion to fellow CNF world record holder William Trubridge. Albeit at first skeptical of her ability in Roatan, Sayuri Kinoshita actually is the reigning world record holder in CNF at 72m.

Australian freediver Amber Bourke had also announced 70m which heightened excitement for the final event as a head-to-head dive off between the ladies, but in the end, Bourke ended up turning early, receiving a penalty and a yellow card.

Starting a small domino effect of shifts Alessia Zecchini of Italy also saw a preliminary white card dive disappear when a review of bottom-plate camera footage revealed she had a disqualifying pull. The DQ for Alessia opened the door for Sofia Gomez Uribe of Colombia to finish in second, instead of her predicted third place, with the Colombiana’s impeccable dive to 59m.

“Today’s no-fins dive for Sofia was a balancing act,” offered her coach and partner Johnny Sunnex. “To go deep enough to be in contention but also to be conservative enough to sleep easy and finish on a high. Sofia & I chose to announce 59m because it is a depth just one meter shy of her national record but also a depth she has done many times before.“

The effervescent Gomez Uribe had sage planning & Sunnex on her side, but when she prepared to enter the water for her dive she noticed that Molchanov & Trubridge would be the ones watching and commentating and it rang her nerves a little. “I was more worried because I know that my technique is not so nice and I thought ‘oh no’ Alexey and William are watching me!’” but the world renowned champs had nothing but praise for Sofia’s technique and reassured her that she looked strong.

“Today was beautiful, the conditions were perfect, it was a really nice dive and it felt easy,” chimed Sofia who completed her no-fins dive in 2min 30sec.

Continuing the ripple of shifts from the Zecchini DQ, for the second time in her life, Jennifer Wedland of Germany was able to take home a bronze medal for CNF (a bronze which she shares with Jessea Lu of China this year) and perhaps, more importantly, a personal best and a new German National Record. The 31-year-old only recently started her journey into competitive freediving, and her very first depth competition was actually the World Championships in Cyprus two years ago.

“I am very happy with the entire competition and my results. I could not ask for more. Two national records (in FIM and CNF) and a bronze medal is an amazing outcome for me. Although I was already very tired (from the Caribbean Cup and the two big target dives preceding my no fins attempt in the WC,) I really enjoyed today’s dive. On the way down I had some trouble as I did not hear my dive alarm. So I swam 10m deeper than I usually do before allowing myself to relax into freefall. But on the way up I just enjoyed every stroke, knowing I won’t be diving deep for a couple of months now. I have to go back to work in two weeks. And now I am looking forward to seeing my family again!“

The relative newcomer was fortunate to room with Alenka Artnik during the comp, and to garner some wisdom from this year’s gold medalist in constant weight, “I admire my roommate Alenka, she has a great approach to diving and I learned a lot about mental preparation from her.”

Dual bronze winner Jessea Lu of China almost didn’t dive at all but wisely stuck it out.

“I woke up feeling sweaty, with some aches in my shoulders and arms. Probably due to some push-ups I did the night before — silly me!” shared Jessea “but I thought ‘hey, I would like to see my dive on Diveye and I’m ok with a yellow card’ so I went for it anyway. I never imagined I’d place on the podium as some of the girls here are much stronger at no-fins than I am. At the end of my dive my arms were so lactic! And although I didn’t get the tag today, it was still a personal best dive. What’s better than a PB?!!”

With such an affable attitude and monster breath-hold, it’s clear we will be seeing more from Jessea Lu.

See the complete list of final results here below. 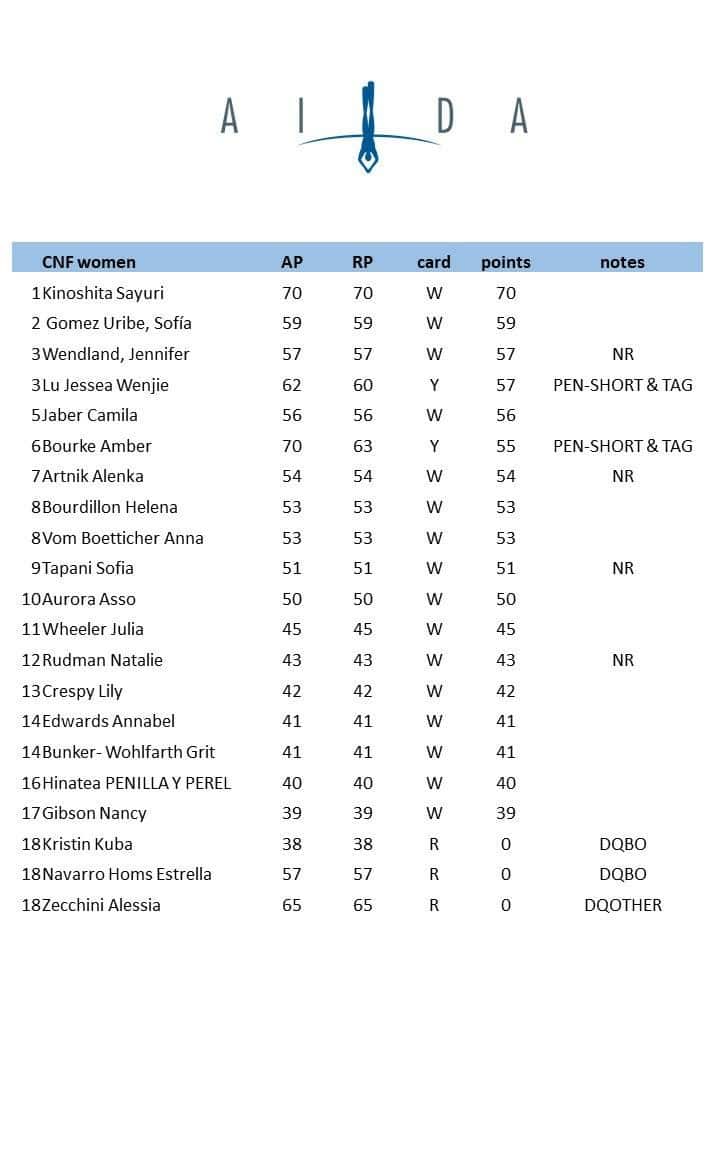