Cyclone Gonu lashed Oman on Wednesday as thousands of people were evacuated in the Gulf state and neighbouring Iran for the strongest tropical storm to hit the region in 30 years. 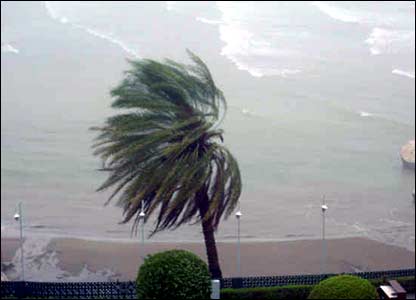 As Gonu — the Maldives word for a bag made of palm fronds — hit the Omani capital strong winds snapped tree branches and blew over street signs. Roads were flooded and thick fog blanketed out the mountains encircling the city.

Heavy rain and wind led to flights being suspended at Muscat airport, but the cyclone has so far not affected shipping in the Strait of Hormuz through which at least a quarter of world oil supplies passes, officials said.

Oil experts said any impact on world oil prices would be temporary provided facilities in the area stayed intact.

"If shipping is halted through Hormuz, I think there is going to be a panic in world oil markets and prices could shoot to as high as 80 dollars, but of course for a very short period," Kuwaiti oil expert Kamel al-Harami said.

The streets of Muscat were almost deserted save for all-terrain vehicles after police asked people to stay indoors and thousands of residents were evacuated, but the storm weakened steadily after making landfall.

The ministry of transport said the ports of Sohar and Qabus in Muscat were closed.

Cyclone Gonu initially packed winds of 260 kilometres (160 miles) an hour but they have now dropped dramatically to some 90 kilometres (50 miles), weather officials said.

They said the cyclone was expected to be the strongest to hit the Arabian peninsula since 1977.