DAHAB, 11th June 2007: -   Sara Campbell, a relative newcomer to freediving, has set some impressive new British Women’s records this week, culminating with a Constant Weight (CWT – descending and ascending using a monofin) dive to 65 metres, smashing the previous record of 54 metres by 11 metres.

In record attempts held over four days in the Blue Hole, Dahab, Egypt, as well as her CWT record, she also recorded a 62-metre dive in Free Immersion (FIM – descending and ascending a submerged line by pulling with the arms only), which puts an additional 12 metres on the former FIM record of 50 metres, and exceeds the current men’s record by two metres. 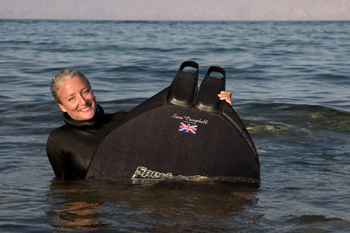 Sara said: “It has been a dream week. Everything I have attempted I have achieved. My dives still feel very comfortable and there is definitely more to come. After a rest I’ll start training for qualification for the World Championships.”

Sara is looking for companies to sponsor her training and participation at this year’s World Championships in Sharm el Sheikh. For more information, or to contact her, please visit www.sarafreediver.com or call +20 12 744 5646.