It is said that the Pacific Northwest was one of Jacques Cousteau’s favorite places in the world to dive. Those who know British Columbia diving are hooked on it, and for good reason.  With stunning walls, numerous wrecks, seasonably amazing visibility, and a grand diversity of flora and fauna, the “Emerald Sea” has plenty to offer most divers.

When I found out that I had to go to Vancouver for a meeting, my thoughts immediately turned to diving, and my gear practically started packing itself.

When people think of diving in British Columbia, they often think “cold”.  Certainly, in the wintertime, bottom temperatures will be in the 38-44F range, but what most people don’t realize is that in the summer, the water is often warmer than in Monterey.  From July through September, bottom temperatures will usually range from 52-56F, and the surface will be an astounding 65-70F. 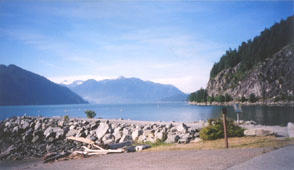 Whenever anyone plans to dive in unfamiliar waters, it’s a very good idea to obtain an area orientation.  After chatting on the phone with PADI Course Director Neil Christian, my first stop was the International Diving Center, a PADI Career Development Center just a few blocks from the popular Kitsilano Beach Area (just south of downtown Vancouver).  IDC offers multilingual instruction and is a full service facility including nitrox and trimix fills and equipment.  With their Oxygen booster, they’re one of the few shops that can pump high pressure oxygen.

I spent a great deal of time at IDC that first evening with instructor and full-time staff member Landon Shantz who was generous not only with his time and suggestions, but also provided me with a useful map to help me find my way to the local sites.

Armed with Landon’s map and a couple of tanks from IDC, I took a scenic drive up to Whytecliff Park, Canada’s very first Marine Protected Area.   The park is a popular destination for divers and topsiders alike, so parking can be at a premium on the weekends past mid-morning.  I found that it’s most convenient to park near the concession stand, as the two paths to the water lie on either side of that building.  Additionally, parking near the concession stand also puts you pretty much in front of a large lawn and a picnic table perfectly convenient for setting up gear. 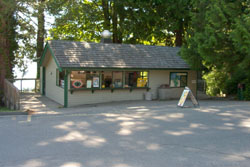 Once at the park, I met up with and befriended a group from Ocean Quest, a PADI 5 star Instructor Development Center and full service technical shop located in Burnaby.  Ocean Quest also has an Oxygen booster, allowing them to provide any custom blend to high pressure tanks.

After signing the appropriate waivers, Kellie and Ashley welcomed me into the group along with those they were leading, and we all gathered to plan our dive.

There are three basic dives at Whytecliff Park: “Left”, “Right”, and “The Cut”.  The Cut requires a bit more of a swim, and is considered an advanced dive because of the possible depths and currents, but it is well worth it if conditions are favorable and you and your buddy are experienced with wall diving.  Going “right” often brings people to the mouth of the cut, so you still get a taste of the wall’s topography and biodiversity. 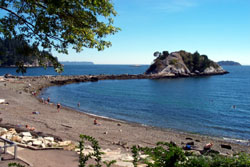 Facing the concession stand (and the water), the path to the left is a “gentle” 15-20% grade and runs about 200-300 feet down to the beach.  The path on the right is shorter, but also a little steeper, and includes some stairs at the bottom. The path on the right has the added bonus of a freshwater rinse station, but neither path is a joy on a warm summer day with a drysuit.

After the hike down to the water, I was anxious to get in and cool off.  Much to my surprise (and disappointment), the surface temperature was about 70F, and seemed balmy compared to the Monterey waters to which I’m accustomed.  We swam out on the surface towards the marker, and once we were about halfway there, we began our descent.  The first 12-14 feet were warm and murky, but once we got below the layer of plankton basking in the sun, the water cooled down a few degrees and the visibility opened up a bit.  Littered on the floor were mussel shells by the millions, and scouring over them was an army of huge sunflower stars.  One star I measured was nearly four feet across (measured from fingertip to opposite shoulder).*

*Yes, they grow ‘em big up here, and lest one suspect my observations were skewed by nitrogen narcosis or refraction through the mask, I always use some sort of empirical or comparative measurement when sizing up a critter.

As we descended along the bottom, sunflower stars crowded the gentle slopes like skiers do neighboring mountains after the first big winter storm.  Once we reached 59 feet, we descended through a visible thermocline.  With the temperature drop of at least 8F degrees, I was glad to be in my drysuit.  Strangely enough, the scenery seemed to change around the same time.  Replacing the ubiquitous sunflower stars was a loose blanket of brittle stars, each animated by and repulsed by my light.  The wall was now speckled with giant white plumose anemones, reminiscent of Monterey’s famous Metridium Fields – only vertical and larger.  Meandering among the anemones and along the wall’s ledges were numerous crinoid stars, large California Sea Cucumbers, and an occasional leopard dorid.

We barely made it to the mouth of the cut when it was time to turn based on our dive plan.  The gentle slope affords a wonderful opportunity to ascend slowly and review the dive in reverse.  On the way back, amidst the sunflower stars, I found a lone (although not small by any means) morning sunstar.  I could almost hear Marisa Tomei telling Joe Pesci “Oh Yeah. You blend.”

After the dives, I packed up my gear, and headed over to neighboring Horseshoe Bay to catch the ferry to Nanaimo, where I would continue my adventure, and explore some of the famous wrecks in the area.

With 35 vessels and 25 routes, British Columbia boasts one of the largest ferry systems in the world. One of the most popular routes is the one I was about to take between Vancouver and Nanimo.  The larger ships employed along this route are absolutely enormous at 560 in length (picture two football fields end to end).  While these enormous ships can carry 2100 passengers and nearly 500 vehicles, reservations are a must if you’re planning to travel by car between Vancouver Island and the mainland on a Friday, Sunday, or at the end of a holiday weekend.

Reservations can be made online, or by telephone, and cost $15 in addition to the regular fare.  These reservations are non-refundable and only valid for the specified sailing time, so it’s important to plan ahead.  Reservations sell out quickly as they only account for 30% of the ship’s capacity.  The rest of the ferry is filled on a first come first served basis… and believe me, there will be plenty of people ahead of you.

It’s not uncommon to wait in line for four or five hours, and many local passengers can tell you about the time they waited six or more hours.  Apparently, this is such a “normal” expectation that a culture has developed around it.  You’ll see people breaking out lawn chairs and picnicking in the parking lot of waiting vehicles.  While this is fascinating and social in its own right, take my advice and reserve a spot for a sailing you’re confident you can make.  If you’re done diving early, you can relax at a nearby pub or restaurant and then hop in your car and drive over when it’s time.  As you zip past the miles (no exaggeration) of cars in line, you’ll realize that those were the best $15 you ever spent.

Editors Note: Join us next week for Part II of this piece exploring Diving around Vancouver