Does It Come In Any Colors Besides Pink? 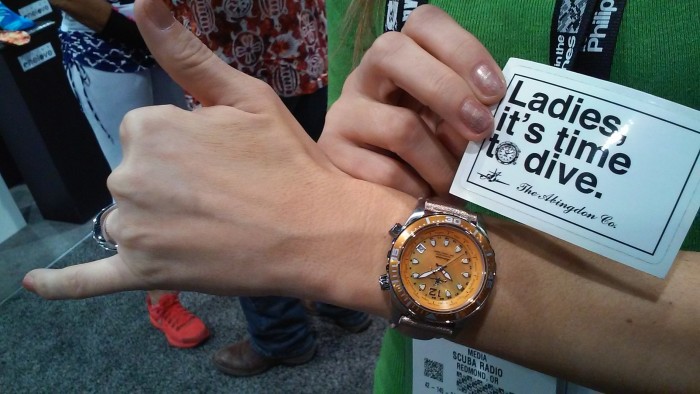 Abingdon Welch is more of a flyer who dives than a diver who flies, so what is she doing at DEMA Show 2014?

The short answer is, she’s meeting a need the industry will barely admit to having: a high-end dive watch for women.

When your story begins in the clouds it may seem impossible to climb any higher, but Abingdon doesn’t really know anything about impossible.  Formerly featured on the Discovery Channel show “Flying Wild Alaska,” her day job is delivering new airplanes to their owners in Australia and Asia.  She just makes watches on the side.

As a young pilot, Abingdon was used to seeing cool flight watches on the wrists of her colleagues, but when she went looking for one to wear herself, all she found were men’s styles.  So she took the problem to The Ninety-Nines, an international group of women pilots she belonged to whose first president was none other than Amelia Earhart.

Abingdon asked lots of other pilots what they would want in a watch, then went home and Googled which countries make the best watches (Switzerland and Japan, it turns out), and shocked everyone by showing up to the next meeting with prototypes for two different watches.

Thus was born the Abingdon Co., which cleared more than a quarter-million dollars in profit last year selling watches to women pilots, which by the way, make up only 9 percent of that industry.

According to PADI statistics for 2013, 34.5 percent of the worlds’ scuba divers are women, so when Abingdon fell in love with diving during a 2010 trip to Bocas del Toro, Panama, she was surprised to find the same problem: no attractive, functional dive watches designed specifically for women.

And thus, the Marina was born.  In order to make sure her design would meet the real needs of divers, Abingdon put out a call on Facebook and found nine master divers who just happened to be women to advise her. It turns out that what women want (in a dive watch at least) are lighter bands, automatic mechanics, and colors other than pink or purple — essentially, they wanted a functional watch they could wear to the bottom of the ocean or out to dinner.  You know, like the kind they make for men.

Abingdon sees the Marina filling the gap between the hundred-dollar waterproof department store watch and the seven-thousand-dollar Rolex. What she’s produced is an affordable high-end timepiece that will give any men’s dive watch a run for its money, and do it while looking fabulous.

First, the function: The Marina has a sapphire crystal that will withstand plenty of knocks and scrapes without scratching, and features a battery-free “movement,” which is watchmaker’s jargon for the internal mechanism that runs the watch. Removing the need for battery replacement also eliminates the need to ever open the casing, so the risk of flooding becomes non-existent. It runs on movement, so as long as you wear it at least every three days, it should keep perfect time. If you take it off for a bit longer, no worries, just reset the time and put it back on your wrist.

Another of the Marina’s clever innovations is the double bezel. The first is the classic ratcheting dive bezel, but the second is really something special. Etched around the inside of the second bezel are the names of the most popular dive destinations in the world. Without resetting the watch from your home time, you can set the bezel to the city where you’re diving and be able to see simultaneously what time it is in both cities.  This makes it a no-brainer for divers who want to call to check in at home or work without waking anyone up in the middle of the night.

The band design presented yet another opportunity for improvement. The Marina’s band comes in leather or silicone, with a feather-light titanium bracelet option for diving. Securely fitted when installed, any of these options can be easily switched out for the other by the diver herself. The titanium bracelet has not one, but two expansions so you can wear the Marina comfortably even over a 7mm wetsuit.

Available in a rainbow of face and band colors, the form of the Marina dovetails seamlessly with the function.  Even though Abingdon is fighting to keep the final retail under $1,000, the Marina is still a substantial investment, and the aesthetic versatility of multiple color and band combinations means it will earn its keep as a piece of fine jewelry when it’s not moonlighting as a quality dive instrument.

Where can I get mine, you ask?  Well, the Marina is still idling in the prototype phase and that’s where the consumer comes in.  In order to fund her first run of production and keep costs low enough to keep the watch affordable, Abingdon launched a Kickstarter campaign this Tuesday. With a goal of $63,000, the $8,000 she’s made in just four days seems like a promising start, but the nature of Kickstarter is that if you don’t meet your target goal, you don’t get a penny . . . and the clock is ticking.

Abingdon Co. only has thirty-two more days to raise the other $55K.  They’re not asking something for nothing though — at each level of donation there are fun and quirky incentives.  You can parlay your donation into a preorder of the watch for $600 (which also includes all the stuff from the $300 donation level), and for $10,000 you can take a private flight lesson with Abingdon herself, or even rename the watch!

So get on over to Kickstarter and throw down your money to help Abingdon get this watch made.  If you’re interested in any of her other watches, you can take a look at those on the Abingdon Co. website here.  Keep your eye on this rising star and put a Marina on your wishlist for Christmas 2015. 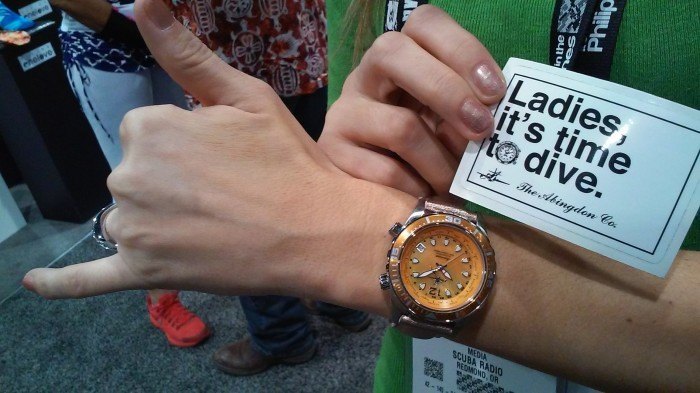